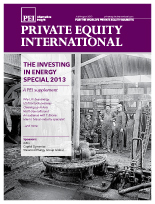 Back to Print Editions

IR professionals gathered in New York to discuss their evolving job, the changing environment, and the eternal struggle to satisfy all their LPs’ needs.

Large US pensions aren’t the only ones keen on multi-asset class separate accounts – as illustrated by the mandates recently won by LGT.

Last year, BlackRock’s private equity fund of funds group completed the transformational acquisition of reinsurer Swiss Re’s Private Equity Partners, doubling AUM at a stroke to around $15 billion. PEI asked managing directors Lynn Baranski (who ran the old BlackRock team) and Nathalie von Niederhäusern (who ran the old Swiss Re team) about the rationale for the deal – and how the combined business hopes to win.

First Round: The root of all evil

Turns out that even the thought of money makes us nastier people.

First Round: Say hello to my little friend

An evening with Al Pacino. Or not, as the case may be.

With more LPs accessing emerging markets through local managers, do firms with global footprints have any sort of competitive edge?

Investors believe private equity has proven its concept, according to Coller’s latest LP survey. But hostility to the asset class may now be coming from unexpected quarters.

As First Round crunched into its fifth egg-and-cress sandwich of the week, a thought occurred.

CalPERS seems to be reversing its position on the purchase of GP management stakes.

US trade buyers are back with a vengeance in Europe – good news for GPs with assets to sell.

Value creation may not be at the top of LPs’ wish-lists in Asia, but it’s starting to have an increasing influence on capital commitments to funds.

Why is Germany now ‘one of the most attractive private equity markets to be in’?

The UK’s two leading venture philanthropy groups have taken some of their own medicine, deciding to merge in pursuit of greater scale and impact

Social impact: What Damon did next

A few years ago, Damon Buffini was one of the biggest names in European private equity. Now he spends his time trying to help social enterprises reach another million people

Social impact investing now tops the agenda for the world’s most powerful countries –  its transformational potential is becoming increasingly apparent.

MENA: After the storm

The MENA region has dealt with several crises over the last few years. How is the region’s private equity industry picking itself up after the turmoil?

The outlook for listed private equity is healthier than it has been for some time. So why aren’t more investors buying? And is there anything managers can do about it?

For TPG co-founder David Bonderman, ESG is top of mind, and he has firm views on the subject.