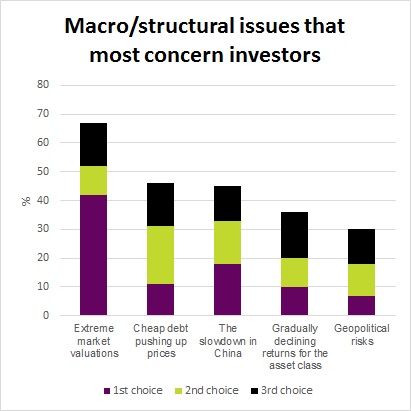 Just as in last year’s LP Perspectives survey, extreme market valuations remained front and centre of limited partner concerns across Asia, Europe and North America. At the end of 2014, Bain & Co reported that private equity dry powder had hit a global record of $1.2 trillion, with some $452 billion of that earmarked for buyout funds alone. That huge quantity of capital looking for a home in the asset class shows little sign of abating, with Blackstone reporting in July this year that it was sitting on $82.1 billion of dry powder.

Worries over where to deploy all that cash with valuations at such elevated levels was the standout concern, with 48 percent of North American LPs reporting it as their biggest worry. Concern over the same issue was only slightly less for European and Asian LPs, of whom 43 percent and 42 percent respectively cited it as their biggest concern.

One Asian LP survey respondent told Private Equity International: “We are concerned about high valuations on potential acquisitions and [also the] intensive competition. Some GPs appear to face a tough time with finding a sufficient number of satisfactory deals.”

While voicing his concerns over high valuations, one respondent at a European LP said he expected valuations to eventually collapse, creating a new set of issues for private equity investors and for the wider economy.

“When the existing bubble explodes it will be in the first instance a correction of the valuations in all market segments. In the second instance it will influence the real economy [in areas] like consumption,” he said.

In a private equity world full of capital looking to find a home there doesn’t appear to be an easy fix to the problem, given the abundant liquidity brought on by the availability of cheap debt. It is, then, perhaps no surprise that the second biggest overall macro concern in the survey was how all that cheap debt was serving to push asset valuations ever higher.

The combination of that surge in global liquidity has been exacerbated by continuing near-zero interest rates which have undoubtedly inflated asset valuations and continued to lift acquisition multiples on private equity target investments.

Meanwhile, the global knock-on effect of a sharp slowdown in China as it continues to transition toward a market economy was the third biggest worry for 2016 cited by private equity investors. It was markedly more of a concern in Asia and Europe, where it was the biggest single issue for 25 percent and 20 percent of LPs respectively, while in North America just 10 percent of LPs described it as the number one concern.

According to Robert C Wages, head of private equity at Middle East LP Emirates International Investment Company, European-focused GPs are most likely to feel the brunt of a Chinese slowdown over the coming months as many of them are more exposed to the country.

He said: “The slowdown in China and other emerging markets will affect GPs, primarily in Europe, who have been counting on growing their portfolio companies by expanding into the emerging markets.”

Meanwhile, David Chan, a respondent at Asian LP MLC Private Equity, was also concerned about China’s potential slowdown having an impact on the rest of the region and the effect of a strong dollar and depreciating currencies across a raft of emerging markets.

He said: “Currency is a big risk, especially for emerging markets given the fact that most funds are held in US dollars.”

For Matt Rowland, of North American LP Lowery Asset Consulting, interest rate hikes in the US were the biggest single factor, although rather than focusing purely on a slowdown in China, Rowland’s second biggest concern was “a slowing economic growth in the US and overseas”.

Fellow US LP respondent, Portfolio Advisors’ Peter Schwanitz, also voiced concerns over the potential impact on markets of a rising US interest rate environment as well as the sixth biggest concern overall for investors, worries over the uncertain fate of the euro-zone.

He said he had “growing concerns about the future of the European Union, challenged to handle refugees and the UK potentially leaving the club” as an issue to watch out for over the coming months.

Despite the raft of issues giving many LPs sleepless nights, such concerns definitely don’t translate into a reduced appetite for private equity. In fact, gene-rally the reverse seems to be true.

With bond yields still close to all-time lows, equity markets still reasonably close to historic highs but displaying heightened volatility, and many LPs struggling to match their liabilities from conventional asset classes, it comes as little surprise that exactly half of survey respondents are looking to increase exposure to private equity in the next two years. A further 37 percent said their allocation to the asset class would remain broadly the same.

By contrast, just under 5 percent of respondents said their allocation to private equity would reduce over the same time frame while 8 percent said they would be looking to invest opportunistically over the next 12 months.