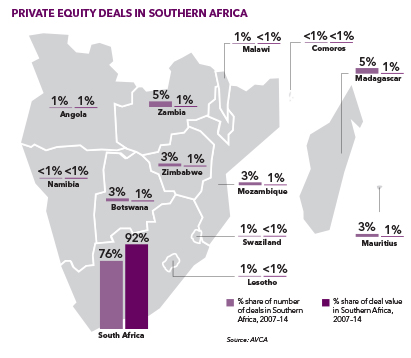 South Africa, the continent’s most developed economy, has long led the way in Southern Africa, buoyed by its growing middle class. But deal volumes in the region have been trending downwards since 2012 due in part to slower growth in the country and lower commodity prices, according to the African Private Equity and Venture Capital Association. Overall, Southern Africa’s share of deal activity in Africa declined from 37 percent in 2007-10 to 31 percent in 2011-14.

Rising stars: “Mozambique looks set to provide some interesting opportunities on the back of the natural gas discoveries offshore. We think there will be some good real estate investment potential there,” says Actis’s Natalie Kolbe. Madagascar and Zambia are also arousing interest.

South Africa: A wave of new consumers
With “world-class” companies, South Africa remains an attractive target for private equity investors, says Kolbe. “South Africa is now also benefiting from democratisation and the wave of new consumers coming through from the black communities,” she says. “Many of the businesses we are backing currently are looking for ways of capturing growth north of the borders into sub-Saharan Africa.” Companies expected to benefit include two of Actis’s investments: Coricraft, a home furnishings retailers, and Food Lovers Market, Africa’s biggest independent food group.
Potential beneficiaries: Due to increasing urbanisation, we expect growth in organised retail, quick service restaurants and related areas such as logistics, says Osibo. ? 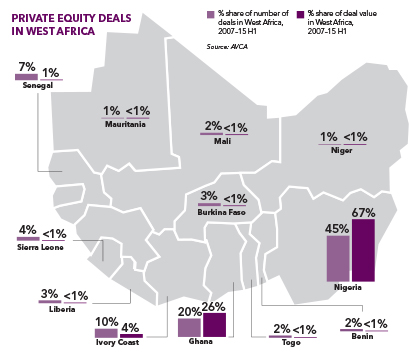 West Africa has the potential to become one of the major beneficiaries of Africa’s private equity liquidity boom, according to AVCA. Its share of deal value has risen sharply from 9 percent in 2007-10 to 25 percent in 2011-15 H1. Deal value was boosted by the opportunities for large-scale investments. Nigeria, the largest economy in West Africa, leads the way but Ghana and Ivory Coast are starting to make important contributions.

Main PE sectors: Financials, industrials and the consumer sectors make up the bulk of the exits.

Future prospects: “West Africa is not as homogenous as other regions in Africa. PE will continue to play a significant part in the region’s development,” says Osibo.

Ghana: Trying to escape Nigeria’s shadow
Long in Nigeria’s shadow, Ghana has become an attractive target for fund managers. Key industries include agriculture, mining, financial services and, more recently, oil and gas. Ghana’s power potential was illustrated by its involvement in the September 2015 $500 million commitment by South Africa-based Africa Infrastructure Investment Managers to develop a pipeline of hydropower plants across Cameroon, the Ivory Coast, Gabon and Ghana.
The deal challenge: “Ghana has historically been quite tough to get PE deals done,” says Doug Agble, partner at 8 Miles. “It’s [partly] finding the right opportunities and [anything involving] manufacturing has always been challenging due to crippling electricity costs. It’s also quite fragmented and so deal size can be an issue.” ?

* LeapFrog Investments sale of Ghanaian life insurer Express Life to UK-based insurance group Prudential was the first exit from its debut fund.
* Express Life had about 60,000 customers when LeapFrog invested in the business in 2012. Within a year of the investment Express Life had increased its staff five-fold and just 20 months after the initial investment the life insurer was reaching some 730,000 customers.
* Express Life used LeapFrog portfolio company Bima, a provider of mobile-delivered insurance, to help expand sales.
* For Prudential, the deal represented its first direct foray into the African insurance market. 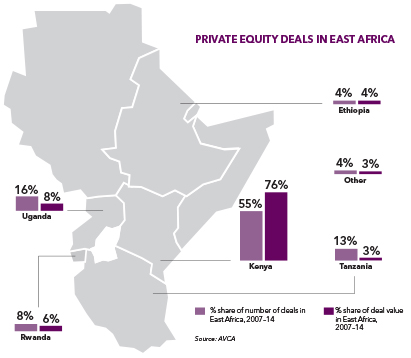 East Africa’s share of private equity transactions in Africa is rising, hitting 11 percent of African deal value in 2015. That is up sharply from 4 percent in 2007-10, according to AVCA. Kenya is the dominant force, buoyed by a growing consumer sector, but Uganda, Tanzania, Rwanda and Ethiopia are all seeing increased interest from private equity investors. Median deal size remains small – $5 million versus $14 million for all African private equity transactions.

Landmark deals: Real estate potential demonstrated by Actis’s flagship project to build a $540 million shopping mall in Nairobi. The 33,500 square metre Garden City, which opened in September 2015, is one of the largest retail malls in Africa.

Growth areas: Financial services is the scene of increasing activity. LeapFrog Investments sold its minority stake in East African insurer Apollo Investments in September 2014 for returns that were described as “in excess of our targeted rate”.

Ethiopia: population growth spurs deals
KKR’s landmark $200 million investment in Ethiopian-based rose grower Afriflora in 2014 – its first deal in Africa – caught the headlines, but it’s the consumer-related sectors that offer the biggest opportunities, says AVCA’s Osibo. The population is growing rapidly – with 91 million people it has the second highest population in Africa – and Ethiopia had impressive estimated 8.7 percent GDP growth in 2015. This has spurred sectors such as food and beverage which has seen a string deals including 8 Miles’ 2013 investment in Awash Wine Share Company.
Deal barrier: Sourcing deals in a country where the majority of companies are owned by families requires trust to be built over a long period of time, says AVCA. ?

* AfricInvest, a pan-African SME-focused private equity firm, together with Aureos Africa Fund and Swedfund, sold their 37.3 percent collective stake in UAP Holdings, an East African insurance company, to life insurance business Old Mutual Holdings in 2015. At the time, Nairobi-based UAP had 12 operating subsidiaries across the region including in Kenya, Uganda, Tanzania, South Sudan, Rwanda and DRC.
* Since its investment in 2012, AfricInvest helped UAP to improve its governance and accelerate its regional expansion with new market entries in Rwanda, Tanzania and DRC, resulting in a threefold increase in shareholder value over the period.
* It was the fourth exit from the 2009 AfricInvest’s Fund II which raised €143 million. The firm is currently investing its Fund III, which held a first close on €154 million. 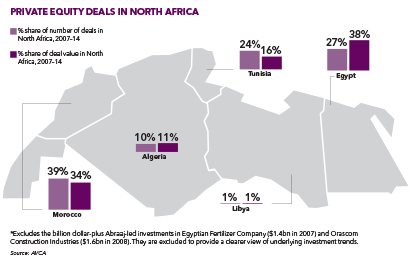 Private equity activity in North Africa has remained relatively resilient despite the recent political and economic events, supported by a strong industrial and manufacturing background and skilled workforce, AVCA says. Private equity investors are also attracted by the proximity to Europe. Morocco, Egypt and Tunisia dominate, attracting almost 90 percent of all deals in the region between 2007-14.

Main PE sectors: Industrials and consumer, then materials and healthcare.

Landmark deals: The IPO of hygiene products manufacturer Société d’Articles Hygiéniques in 2014 generated a 2.4x return multiple for Emerging Capital Partners and was the largest listing since the creation of the Tunis Stock Exchange in 1994.

Growth areas: Education is proving a fertile source of deals. The Abraaj Group has made two investments in Egyptian education providers since 2014 and Development Partners International secured a $20 million equity investment in Universite Privee de Marrakech, a private university in Morocco.

Future prospects: “North Africa is an under penetrated market which presents interesting opportunities for new and existing fund managers,” says Anne Fossemalle of the European Bank for Reconstruction and Development.

Egypt: Beyond the Arab Spring
Buoyed by what The Abraaj Group calls a “growing aspirational population”, Egypt has proved remarkably resilient to recent upheavals. Abraaj’s Cairo-based investments include technology solutions provider OMS and the North Africa Hospital Holdings Group. Private equity firms bolstering their operations include Actis which recently promoted two to partner in its Cairo office.
Risk tolerance: “We’re very happy to see some emerging managers in Egypt because it’s definitely a market that has opportunities. From the investor’s point of view, one has to be comfortable with the political risk and macroeconomic risk etc, but if you have that definitely it’s a market with more opportunities possibly than the Maghreb,” says Anne Fossemalle, director of the equity funds team at development finance institution European Bank for Reconstruction and Development.

* IDH was formed in 2012 by the merger of two diagnostics providers in Egypt, Al Mokhtabar and Al Borg. Abraaj acquired a 76.9 percent stake in Al Borg Laboratory in 2008 for 778 million Egyptian pounds ($109 million; €87.5 million). IDH has over 300 branches, serving six million patients and conducting more than 20 million tests each year.
* Following its initial investment, Abraaj and IDH completed five add-on acquisitions, including investing in regional businesses in North Sudan and Jordan, which culminated with the merger in 2012.
* Abraaj Group partially exited its holding in December 2014, when Actis bought a 21 percent stake. IDH listed in London in May 2015 in a share offering that was 11.2 times oversubscribed and gave it a market capitalisation of $668 million.