China has launched a 350 billion yuan ($53 billion; €47 billion) private equity fund to restructure state-owned enterprises. Its capital will be used for mergers and acquisitions of underperforming companies, overseas deals, industrial upgrades and innovation. The move is part of a long-term government initiative to build large, globally competitive businesses that can invest abroad.

The fund is targeting China's 'smokestack' industries, such as coal, iron, steel and chemicals, which are no longer profitable in a slump.

The remaining 220 billion yuan, according to industry sources, could be funded by other SOEs, private and foreign investors, and even the government.

Thomas Dillenseger, a senior director with Alvarez & Marsal in Hong Kong, is confident there will eventually be 350 billion yuan to deploy. “The real question should be whether the fund could be deployed effectively and if it is able to attract private market investments to grow into a critical mass,” he adds.

This isn't the only fund created to support state-owned firms. In August, China created a 200 billion yuan venture capital fund to shake up its debt-bloated SOEs. And in June, South Korea set up a $9.5 billion fund to recapitalise the state-run banks most exposed to loans from struggling shipping and shipbuilding firms. 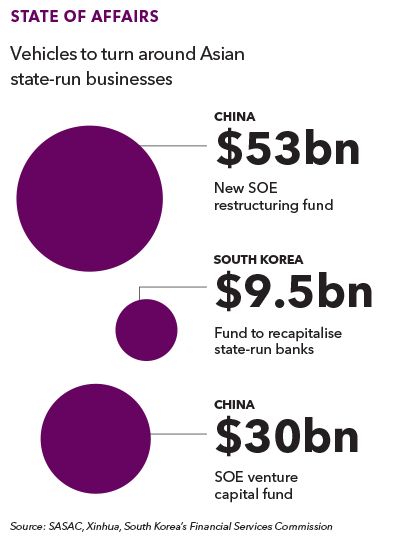 China's more than 150,000 state-owned firms play a significant role in the economy. They contribute about a third of industrial output and enjoy advantages when it comes to regulatory approval and capital access. They also account for about 55 percent of China's $677 billion corporate debt, according to International Monetary Fund estimates.

Consolidating SOEs has long been China's preferred method of reform. When the State-owned Assets Supervision and Administration Commission watchdog was established in 2003, it immediately regrouped 22 SOEs into 11 larger and centrally administered units. Now, SASAC's task is to manage and deploy the massive SOE fund.

Maurice Hoo, a partner with Orrick, says: “The Chinese government understands that restructuring costs may be too high for any individual SOE to absorb on its own. Even the debt-equity swaps or co-investments by private equity funds may require an injection of fresh capital to facilitate the process.”

While Beijing has talked about market forces becoming more central to the economy since the 1970s, in July, President Xi Jinping called on authorities to make SOEs “bigger and stronger”.

However, it's far from certain the private equity industry will join this push. Firms may not yet be ready to embrace the notion that “privatisation” is being used very sparingly in this overhaul.