Some of the shine has come off emerging markets. The promise of outsized returns that induced such enthusiasm post-financial crisis has proved underwhelming at best.

This tempering of interest is borne out in fundraising, which has shown a steady downward trajectory since the heady days of 2011, when 233 vehicles raised a combined $66 billion. In 2016 year to date, just 37 funds have raised $16.2 billion.

Fifteen years after Goldman Sachs Asset Management chairman Jim O’Neill dreamed up the BRICs acronym, those four countries are in very different places when it comes to macroeconomic stability and, crucially, investor appetite.

Brazil, whose GDP was growing at 7.5 percent in 2010, has suffered its worst recession in recent history, while Russia is in the depths of an economic crisis caused by plummeting oil prices and sanctions imposed after the annexation of Crimea. 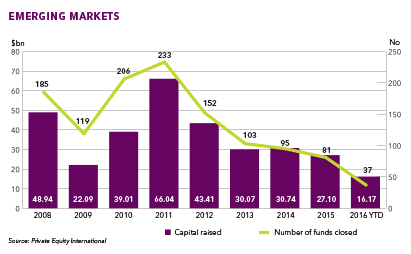 China’s story is more positive – despite a recent slowdown, the country’s gross domestic product growth for 2015 was 6.9 percent.

“If you look at the world today, China is the second largest private equity country in the world after the US,” says Nils Rode, managing director and co-chief investment officer at asset manager Adveq, which focuses its emerging markets efforts on China, then India.

Thanks to a low average income level, India still has the potential to grow at 7-8 percent a year for “some time”, says John Hawksworth, chief economist at PwC.

“India is probably the emerging market with the highest future potential,” Rode says. “It also has a developing private equity universe, and these two factors make India very attractive.”

There are also some bright spots on the horizon. Indonesia, for example, is capturing the private equity industry’s imagination, as we explore on p. 41.

Asia-Pacific is the fastest-growing part of the world, powered by China and India, which is likely to benefit nascent economies such as Indonesia and Vietnam.

“Those are the economies that could rise up the rankings over time, the next wave of Asian tigers,” says Hawksworth.

EMPEA’s latest Global Limited Partners Survey had 34 percent of LPs intending to begin or expand their investment in South-East Asia in the next two years.

Political and currency risk are top of mind for most investors, the survey found. Almost 60 percent also said slowing or negative economic growth posed the greatest concern for portfolio management in the space.

“Why is it that, in the developed economies, historically we’ve always found economic slowdowns to be where GPs have made the best returns because they’ve been able to buy assets that bit more cheaply, and yet in emerging markets when we see some form of slowdown, people panic?” says Janusz Heath, head of investment management emerging markets at Capital Dynamics.

“[Many] investors seem to miss the opportunity because they look at private equity in these markets in the context of public markets and the associated volatility. The whole point behind private equity is that it should be able to ride through cycles because you have GP teams that are working alongside company management. But what investors should do, and what they do, is never quite the same, sadly.”

The focus, like private equity investing anywhere else, needs to be firmly on the fund managers. The best, who are dedicated to taking advantage of the long-term growth trends in these markets, will succeed, no matter the economic backdrop.