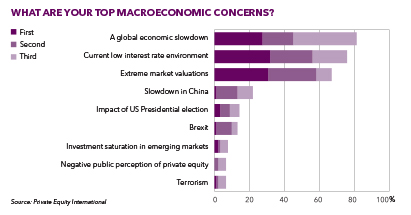 With talk of entry prices and leverage levels reaching heights last seen in 2007, many industry insiders believe we’ve reached the top of the cycle.

When it comes to macroeconomic issues, globally, the limited partner community is most concerned about a global economic slowdown, shows our PEI Perspectives 2017 survey, followed by today’s low interest rate environment.

These two issues have overtaken extreme market valuations, which topped the list of concerns for LPs in last year’s PEI survey. This time around, respondents are least concerned about terrorism and the negative perception of private equity.

The vast majority of respondents – 88 percent – are intending to make fresh primary commitments next year.

And it seems the majority of LPs are satisfied with the way the asset class is performing for them. Over the last 12 months, 33 percent said their private equity portfolio outperformed their benchmarks, and 49 percent said it performed in line with expectations. Just 10 percent said it came up short.

Going into 2017, 24 percent said they feel either much more or more confident about the performance of private equity – higher than for private real estate, infrastructure and private debt – and half said their confidence levels are about the same.

However, 22 percent indicated they’re feeling less confident about private equity in the next 12 months, second only to private real estate.

Contrary to indications throughout the year that many LPs are making moves to trim their manager relationships, just 17 percent of our survey respondents indicated they were looking to decrease their GP relationships, while two-and-a-half times more – 43 percent – said they are actually looking to work with more managers.

This may be linked to the survey’s finding that 42 percent of LPs globally are under-allocated to private equity – more than to any other alternative asset class. Three percent indicated they are over-allocated, and 36 percent are at their target.

Another market trend dominating discussions during 2016 was co-investment, something which is set to become even more prevalent next year. Almost half of survey respondents are intending to increase their co-investment activity in 2017, and 34 percent are planning on making more direct investments.

Some investors are also looking to become more active in the secondaries market: 16 percent said they would increase their activity in selling fund stakes, and 28 percent anticipate acquiring more fund stakes, while 15 percent expect to increase their investment activity into secondaries funds. However, 55 percent are not planning to participate in stake sales at all, 39 percent do not intend to acquire any stakes, and 44 percent won’t be making commitments to secondaries funds.