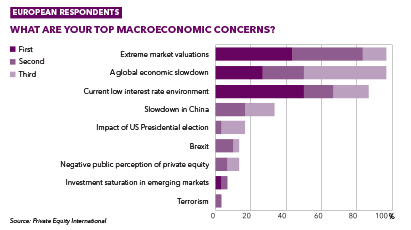 Click here for the full survey of European LPs

Throughout 2016 some of the most influential members of the global investor community have started to come to the realisation that it may not be possible for private equity to continue to deliver 2.5x and 20 percent IRR on a consistent basis.

It should come as no surprise, then, that top of mind for European LPs is a global economic slowdown – which could negatively impact the performance of their current portfolios.

Of equal concern – for the second year running – is extreme market valuations, which chimes with what PEI has heard anecdotally about just how difficult it has been to put money to work this year.

According to Mergermarket data, deal volume for the first nine months of 2016 fell by 3 percent to 4,849 deals compared with the same period in 2015, and combined deal value dropped 12 percent to €476.3 billion.

Despite this, just over 30 percent of Western European LP respondents to PEI Perspectives 2017 said their private equity portfolio performed better than their benchmarks in the last 12 months – almost double that of private real estate, infrastructure and private debt. A further 51 percent indicated it performed in line with expectations.

What’s more, 57 percent say they are feeling as confident about PE’s performance over the next 12 months compared with the last, while 23 percent say they feel less confident. Sixteen percent said they feel either more or much more confident.
Just six percent are intending to decrease their target allocation to private equity, while the majority – 51 percent – intend to keep it the same, and 26 percent are planning on increasing it.

Almost 90 percent are intending to make fresh primary fund commitments during the next year, significantly more than in other alternative asset classes. Just 36 percent intend to make such commitments to real estate funds, 47 percent to infrastructure and 42 percent to private debt.

Perhaps surprisingly, Britain’s shock decision in June to leave the European Union does not appear to be much of a concern for European LPs. In fact, they’re more concerned about the outcome of the US election (the survey was conducted prior to Donald Trump’s election as president).