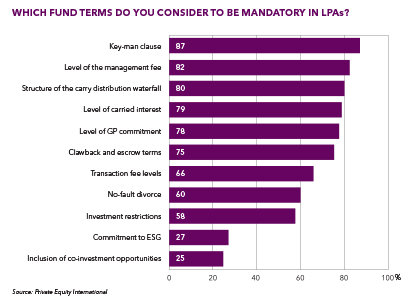 For limited partners negotiating an often long and complex limited partnership agreement, one outcome remains critical: alignment of interest. The LPA must ensure that “there is a strong alignment between GP and LP, particularly for GPs that are at their fourth, fifth funds and have won great money in the past”, says one LP.

Unsurprisingly, the key-man clause, the level of the management fee, and the structure of the carry distribution waterfall rank as the top three LP must-haves for LP respondents to the LP Perspectives 2017 survey. “The main terms have largely remained constant but there has been much more focus on investor protection provisions,” says King & Wood Mallesons partner Ajay Pathak.

These include key-man clauses; fault and no fault removal of managers where “the devil is often in the detail”; and the level of GP commitment to ensure alignment with LPs, he says.

LPs are also increasingly seeking seats on the limited partner advisory committee, as well as information on the manager’s policies on dealing with conflicts and ESG matters, Pathak adds.

The focus for LPs is on how terms are constructed and how GP or LP-friendly they are, says Adam Turtle, partner at fund advisors Rede Partners. For non-management fee income, for instance, “LPs are much more granular in focus on how those fees are split, what types of fees you can charge, the quantity, and the justification, rather than leaving it up to managers to decide”.

POWER DIVIDE
However, in an investment cycle that favours GPs, limited partners are split in their ability to negotiate terms. Status as a cornerstone investor, the size of commitment, willingness to negotiate and competition to invest all determine whether an LP has sway.

“The market is bifurcating into managers that are able to raise funds very quickly where investors have little room to negotiate, and new managers, where LPs have significant ability to change terms,” says MJ Hudson managing partner Eamon Devlin. “The more mature and bigger a manager is, the less likely it is an LP can influence terms.”

“We are term takers not term makers,” says one LP. Another is more optimistic: “We see ‘winners’ setting more GP-friendly terms, but we would like to maintain minimal thresholds.” A third suggests more LPs should walk way if they do not like terms “to encourage GP flexibility”.

But only some LPs have that leverage. “The industry has changed in the last five years,” says Devlin. “Increasingly, the more money an investor puts into a fund the more favourable its economic terms. There’s a tiered system. You end up with different LPs getting different deals on the same fund.”

CONTENTIOUS TERMS
Perhaps reflecting the diversity of the LP base, investors identify a range of contentious terms. One LP comments that issues vary from fund to fund, although the level of management fees was widely cited as an area of conflict. “Clearly defined fees are important,” says one LP. “We want to see more focus on carry than management or other fees.”

Increasingly, investors are focused not just on the return but also the cost of investment, which is driving rising demand for co-investment, says Pathak. Co-investment rights are a relatively new, but significant, battleground. However, the formalisation of co-investment terms in the LPA appears unlikely. “Some LPs are pushing for greater certainty on how co-investments are allocated. From a GP perspective, they would want to retain flexibility in terms of allocations,” he says.

Other contested areas include “investment restrictions, key man clauses and GP commitment level” says one LP. GP “skin in the game” and assurances they are “only rewarded for outstanding performance” are sources of disagreement, says another.

Fund size and limits is also an often-debated area, adds Turtle. Investors are also paying more attention to fund extension provisions and related compensation offered to them. “It has always existed, but LPs are getting hotter on not just giving managers what they want.”

IN THEIR FAVOUR
Although a quarter of survey respondents see little or no change at all on terms, others report significant moves in their favour over the past three years on terms including no fault divorce, transaction fees, fee offsets and carried interest.

In questioning fees and charges and demanding greater transparency, LPs enjoy some regulatory support. “[Transaction and monitoring fees are] a hot button issue with the [US Securities and Exchange Commission], particularly transparency over fees charged to related parties and affiliates,” says Pathak.

Other market shifts that LPs would like to see include more on key-man terms, management fees, fees on committed capital, clawback provisions, and making moves towards a European-style carried interest waterfall.

STANDARDISATION
Over all, LPAs are “not easy documents” and are becoming more complicated, says Devlin. Even with that in mind, LPs are split almost equally for and against standardisation of fund terms.

Reasons given in support of more uniform terms include less negotiation with GPs, greater transparency, the current use of “too much legal verbiage”, speed, simplifying the process, increased efficiency and reduced cost. “Much time and money is wasted on negotiating LPAs without much benefit, other than for lawyers,” says one LP.

It is also seen as levelling the LP playing field. “Standardisation creates a voice for all LPs to influence terms,” says another.

However, given the diversity of mana-gers, “terms should be looking to achieve optimal alignment. There is no one size fits all”, says Turtle. The Institutional Limited Partners Association Private Equity Principles have gone some way to harmonise terms, but ultimately they are just guidelines, he adds.

“I benchmark each LPA against the ILPA Private Equity Principles – no GP wants to admit that they are shirking best practices, so it provides a lot of leverage in negotiations,” says one LP. But his is a minority view. Most LPs are not influenced by the ILPA principles.

While LPs grapple with protecting their interests, new issues are rising on the horizon. These include the increased used of deal-by-deal carry formulas in Europe and subscription financing, says Turtle. However, “there is a lot of inertia in the LP community and it is hard to change the terms and conditions”, he adds.

ON THE SIDE
Some investors are shifting the focus of negotiations with GPs away from the broad terms of the LPA to side letters addressing their individual requirements, says Pathak (right). And like in LPA negotiations, some LPs have more success than others. “It depends on how significant the LP is strategically, or in terms of the timing and size of its commitment,” he says.

As private documents, side letters are creating a “black hole” in private equity, says Devlin, and they are “getting more laborious and complicated”.

Typically the letter, which can run to 100 pages, covers everything from LP co-investment rights and fee discounts to LPAC seat allocation. Despite LP concerns about unequal deals on fund terms, they do not appear to be going away anytime soon. “LPs that get special deals love them,” Devlin says.