Since it began investing in private markets in 2001, the Canada Pension Plan Investment Board has become a private equity behemoth. It now has nearly C$300 billion ($229 billion; €216 billion) in total assets, including C$63.3 billion in private investments as of 31 December, up from a mere C$2.9 billion in 2005.

CPPIB has built its private investments portfolio steadily, but has kept widening out its scope. It first forayed into private equity by investing through externally managed funds and then increasingly through direct investments. It also quickly expanded into secondaries and co-investments on the heels of the financial crisis, and created a dedicated team for them.

This build-up has helped it create ties to general partners around the world. It now has relationships with more than 80 GPs, most of them at the larger end of the market.

And CPPIB does not just commit to their funds, but provides several avenues of capital. At the very least, it commits to several of a GP's funds. It also typically co-invests with the same manager in more than one deal.

With an increasing emphasis on directs, competing with those same GPs has become inevitable, so the challenge for CPPIB is to walk the line between being a good partner and a neutral competitor.

As banks have become more constrained in how they can work with private equity firms, GPs have turned to some of the largest LPs to cater to their needs and CPPIB has become one of their go-to partners.

Take CVC Capital Partners for example. CPPIB made its first commitment to the firm in 2005, with €200 million to CVC European Equity Partners IV, and is now the firm's largest investor. It has committed more than $2.2 billion to six vehicles.

The pension is also a frequent co-investor alongside the firm. In early 2016, it bought Petco Animal Supplies, the speciality pet food, supplies and services retailer from TPG and Leonard Green, paying about $4.6 billion, a significant transaction for both buyers. And it has occasionally provided debt to CVC's portfolio companies.

For most US limited partners, in particular pension plans, this would already be considered a tight LP/GP relationship. But CPPIB wants to take things further.

It can provide exit routes for managers' portfolio companies or be the cornerstone for an initial public offering. And through the secondaries market, it has helped GPs recapitalise funds or partially sell investments and is increasingly providing fund finance services.

“What I like about CPPIB is that they really take their partnership role seriously,” says Marc St John, a partner and head of investor relations at CVC. “What you want is somebody who thinks like you, respects you and doesn't check again and again. They trust your judgment. Sometimes it's hard for LPs to do that.”

St John explains his firm may call the pension in various situations including to co-invest if there's too much concentration in a deal and CVC wants to diversify its risk for example.

“If a GP needs more money that they can either underwrite or hold in their own fund to do a deal, it's our job to service that demand”
Michael Woolhouse

“If a GP needs more money that they can either underwrite or hold in their own fund to do a deal, it's our job to service that demand,” says Michael Woolhouse, a managing director and head of secondaries and co-investments, a group that falls under CPPIB's investment partnerships department.

Woolhouse took on his position in July 2015 when Yann Robard left after more than seven years at the helm. Under Robard, the group focused heavily on GP-led transactions, helping GPs such as JW Childs Associates and Kainos Capital Partners restructure or recapitalise ageing funds.

In the past 18 months, Woolhouse has refocused his group away from those deals, realising they can be more challenging in part because the quality of opportunities has become questionable, dealflow is intermittent and because they are expensive.

Instead, he has brought co-investments back to centre stage and – in secondaries – favoured purchasing LP fund stakes. As he has adjusted the focus of his group over the past 18 months or so, Woolhouse had “a lot of internal plumbing changes that we had to make happen”, he says.

On the co-investment side, Woolhouse's group increased the maximum equity investment to C$275 million to capture more attractive opportunities. For secondaries, he expanded coverage of private market funds to allow his team to move faster when a portfolio comes to market.

“We have restructured how the team is organised so we gather information about the funds we're pricing in a structured way, which is a big competitive advantage to us,” says Woolhouse.

“We're covering more funds and we're getting better quality information. We can know more about what we're buying when portfolios come to market. We can react, and that's a necessary thing if we're competing against the best of the best.” 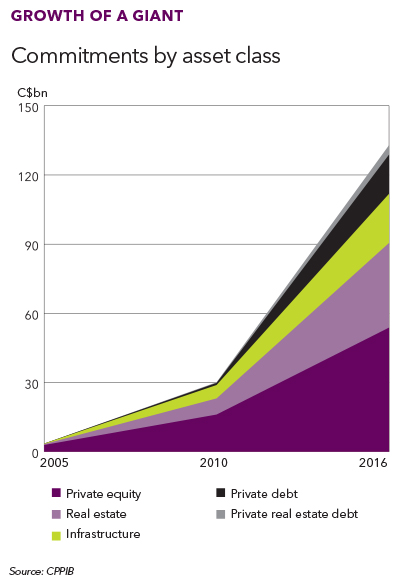 In 2016, CPPIB invested C$2.5 billion in secondaries, half of which was into a portfolio of just under $1 billion sold by Australian sovereign wealth fund Future Fund, while the remainder was in about a dozen transactions with single fund interests.

The Future Fund deal illustrates one competitive advantage a large institutional investor like CPPIB has over a more traditional secondaries buyer.

About half of the portfolio was in a single GP, which Secondaries Investor reported was Los Angeles-based Oaktree Capital Management. With such a high degree of concentration in the portfolio, most secondaries buyers were skittish. Meanwhile, CPPIB viewed it as an opportunity to begin a relationship with a successful fund manager.

The pension had other advantages over the competition. If they had bought the portfolio, traditional secondaries firms would not have been able to hold the whole deal on their books and would have struggled to secure leverage due to the high concentration.

Oaktree, for its part, doesn't trade frequently on the secondaries market and saw it as an opportunity to help CPPIB get to know their portfolio and deal partners. A source familiar with the transaction notes that Oaktree was eager to welcome the institution as a new LP, although the firm declined to comment.

“CPPIB is one of the largest primary investors in private equity globally, which makes them a preferred buyer in a secondaries transaction from the point of view of the GP,” says Peter McGrath, president of Setter Capital, which worked on the transaction with the institution.

McGrath declines to comment specifically but says generally speaking, GPs do see a secondaries transaction as a great way to start a relationship with the pension plan, or to strengthen an existing one. CPPIB also presents the advantage of moving fast. “When a deal is within their strike zone, they are very decisive and move quickly,” he adds.

Just as CVC is taking full advantage of its relationship with CPPIB, Oaktree's new link-up may lead to future co-investments and primary commitments to its funds.

And CPPIB is gaining exposure to a successful GP. The aggregate net internal rate of return for Oaktree distressed debt funds stood at 16.2 percent since inception as of 31 December, according to the firm's fourth-quarter earnings presentation in early February. 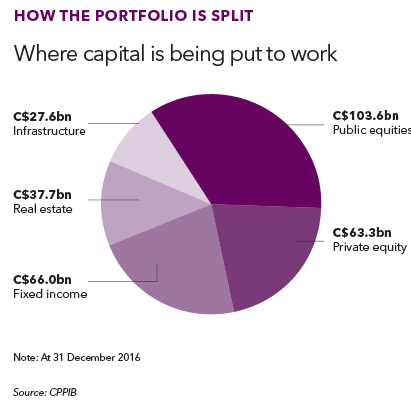 A less successful bid for a large portfolio sale was that for publicly traded SVG Capital.

The pension partnered with Goldman Sachs, a firm it had worked with in the past, to attempt to acquire SVG's entire portfolio, which had already been the target of a £1 billion ($1.25 billion; €1.18 billion) unsolicited bid from HarbourVest Partners. After a complicated process involving several bidders, HarbourVest won.

CPPIB was interested in the deal because the portfolio contained some existing GPs in which it was the largest investor.

“We ultimately failed and it's always disappointing to fail but HarbourVest paid a price we weren't willing to pay,” Woolhouse says. “It's that simple. We chose to be price-disciplined at the end.” CPPIB and Goldman Sachs pocketed more than £4 million ($5 million; €4.7 million) in broken deal expenses.

Although Woolhouse finds the secondaries market competitive and expensive at the moment, he sees more value in the fund interest market than in GP-led fund restructurings.

And while the secondaries team spends less time on restructurings than it did five years ago under Robard, Woolhouse recognises the team's skills, which lie in working closely with GPs. One of his tasks in the past 18 months has been to make sure to put those to good use by focusing on more corporate finance services.

“In light of these market dynamics, we spent time thinking about new product development because we just think the GP-led fund restructuring market is not as attractive as it once was,” he says. “That's what led us into that space in the middle, providing fund-level financing and liquidity. That's a market where we think there's a lot of opportunities.”

Fund managers have been increasingly taking advantage of cheap debt, borrowing at the fund level to have flexible cash management, bridge capital calls and in some cases to return cash early to LPs in the form of a dividend payment.

CPPIB has begun providing liquidity to private funds in the form of preferred equity. In exchange, it can, for example, take a claim over all distributions until it gets its costs back, earn a preferred return and, typically, negotiate an amount on the remaining upside. Although the return is typically lower, the risk is also smaller as it is protected with subordinated equity.

“That's an area we are marketing really hard right now,” Woolhouse says. What he calls partial realisations include more than just preferred equity. CPPIB can buy a subset of a GP's portfolio companies out of a fund, acquire an equity strip across a portfolio, or just acquire a small stake in a specific company where a GP is in need of liquidity.

The pension is providing a full corporate finance and M&A “toolkit”, Woolhouse says. “That's a market where we think there's a lot of untapped opportunities and where we're spending a lot of time right now.”

CPPIB has identified these areas early on in the game and fund managers are taking full advantage of it.

“They look at the GP universe and see how they can be relevant and strategic to them and make money at the same time,” CVC's St John says, adding CPPIB is one of the first LPs to forge these kinds of relationships with GPs.

“A GP has only a certain number of relations. They're getting those relations with GPs. Because they're first, they get the best.” 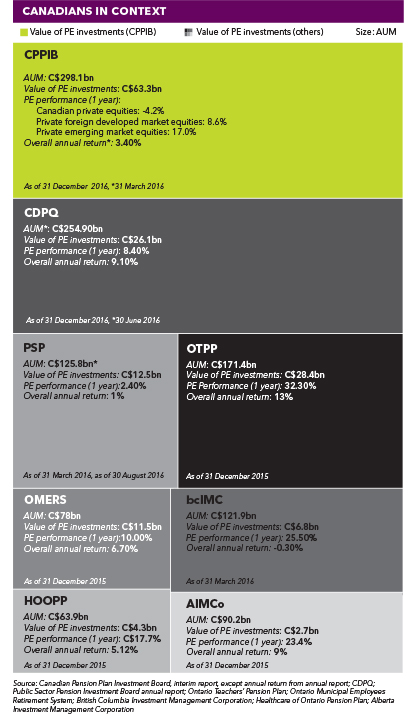