It’s hard to resist the temptation to make predictions at the beginning of any year, but the death of F Ross Johnson just days before the new year is a reason for looking back.

Johnson, who was famous for his battle with private equity firm KKR over the ownership of RJR Nabisco, passed away at his Florida home at the age of 85. The debt-fuelled takeover of the US conglomerate was the among largest leveraged buyouts of its day and arguably the most significant in the frenzy that epitomised the late 80s.

In the three decades since, the private equity industry has evolved but the principles remain the same: source debt to help you obtain an attractive company and cash in on the high exit multiple later. But what has changed in recent years is who the sponsors obtain that debt from.

Looking back, 2016 was a year of contradictions for private debt. As dealflow and fundraising slowed compared with the buoyancy of the previous 12 months, private debt funds also achieved a new level of maturity. Increasingly, European debt funds are underwriting nine-figure unitranche packages, with GSO, Alcentra and Ares leading the way this year.

Many of these larger deals were backed by private equity sponsors turning to alternative lenders due to banks being constrained. Previously, the upper end of the mid-market was the exclusive domain of the banks, but this appears to be changing as debt managers raise larger and larger funds.

In November, HIG Capital turned to GSO to refinance the debts of its portfolio company HCS Group, a chemical company with a footprint across Europe. After being unable to find a bidder offering the right price through an auction process in the second half of last year, HIG tapped GSO for a €340 million unitranche package, while Commerzbank provided a €50 million revolving facility. 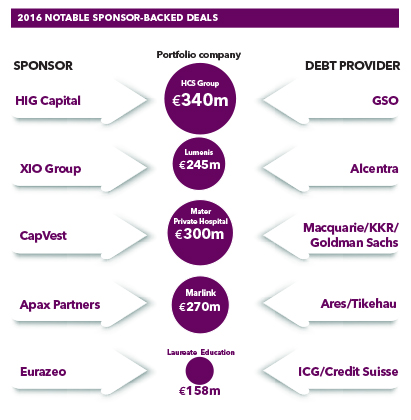 There is an increasing tendency in the buyout market to use institutional capital to finance acquisitions instead of banks. Sponsors sourcing debt financing begin on a parallel track, talking to both banks and alternative lenders about what options are available.

Jean-Paul Bernardini, chief executive of private equity firm NiXEN Partners, says: “Alternative lenders are addressing our needs more than the banks. The trade-off is on the cost because the funds are looking for higher margins. Unlike the banks, private debt funds are actively engaged in managing the asset.”

Bernardini adds that funds also actively monitor the loans they provide. The potential tripping of any covenants is closely followed by managers, unlike banks which tend to take a hands-off approach. It’s understandable when funds are still in the process of developing healthy track records and make investments to a significantly smaller number of portfolio companies.

The trend towards alternative lenders looks set to continue. In November, the European Central Bank opened new battle lines between debt funds and traditional lenders when it started a consultation on leveraged transactions. The ECB published a set of guidelines that, among other things, standardised the definition of EBITDA to an unadjusted rate and noted that six times levered transactions should “remain exceptional”.

A mix of both new regulations and low interest rates assisted the private debt asset class on both sides of the Atlantic after the global financial crisis. Increasingly burdensome rules on the banks naturally hand a further advantage to alternative lenders. Tom Maughan, managing director at Bain Capital Credit, says that the “private placement of junior debt in LBOs has been a feature of the market for many years and this regulation [from the ECB] should add to that trend”.

Private debt managers stress that they are not in competition with banks and that is why, for some, the winner and loser narrative emerging from the ECB’s consultation on leveraged transactions is not easily recognised. Moreover, ratings agency Fitch said that the draft guidance put forward by the regulator “won’t have much impact”. It anticipates a crunch in margins and weakening of covenant structures to be the key characteristics of 2017 rather than increased leveraged levels overall.

This year promises to be every bit as dramatic as the previous 12 months. Brexit, a Trump presidency and elections across Europe are all causing uncertainty on the political front. Without a stable economic arena to play in, both private equity and debt managers may be reluctant to put money to work.

However, with low interest rates now the norm, investors are hunting for yield and managers have to put money to work. If the ECB gets its way, sponsors will be further encouraged to turn to alternative lenders for acquisitions as banks further withdraw. For now, with little certainty about what the next 12 months looks like, fund managers may have to lean on the advice from Johnson that “the ultimate success comes from opportunistic, bold moves, which by definition cannot be planned”.

LEVERAGING THE FUTURE
The ECB published its draft guidelines on improving leveraged loan practices at the end of November. It started a consultation period that ended on 27 January with final proposals expected to be published this year. The process follows research by the ECB that “borrower-friendly conditions have further translated into a weakening of deal structures … and in many cases have led to greater leniency in credit institutions’ credit policies”.

Key points from ECB guidelines:
• The credit institution is expected to consider as a leveraged transaction all types of loan exposure where the borrower’s post-financing level of leverage exceeds a total debt to EBTIDA ratio of 4x;
• Underwriting of transactions presenting high levels of leverage – defined as the ratio of total debt to EBITDA exceeding 6x at deal inception – should remain exceptional;
• EBITDA refers to unadjusted EBITDA, ie, realised EBITDA over the previous 12 months with no adjustments made for non-recurring expenses, exceptional items and other one-offs.

A version of this article originally appeared in our sister publication Private Debt Investor.