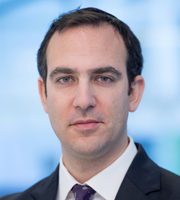 Ten years ago European leveraged loans were wrapped in layers of strict covenants designed to prevent sponsors from spending or borrowing too much or putting the creditworthiness of the loan in danger.

A decade on, the larger end of the European market is much more like its US counterpart.

Cov-lite deals, which give the borrower much more freedom to act as they please, now account for about 60 percent of European deals by volume and considerably more by value, says David Parker, London-based managing partner at Marlborough Partners, the debt advisory firm. In 2007 they accounted for only about 2 percent of volume.

Putting it another way: “In the large market, as long as the deal is not small or sterling, then it goes cov-lite.”

“Historically, European lenders had an English-style loan agreement, usually with four financial covenants,” explains Alan Davies, a corporate partner in the European finance group of Debevoise & Plimpton, the law firm. They were covenants for cover (EBITDA over interest payments), cashflow cover (cashflow over interest payments), capital spending and leverage (debt over EBITDA). However, with the arrival of “cov-loose” deals, these were often whittled down to just one: leverage.

Next borrowers went to work on the other, non-financial covenants, described by Davies in Old Testament terms as “Thou shalt not borrow, thou shalt provide security” and so on. Now, Davies says, cov-lite has become common.

Under cov-lite deals, covenants do not trigger defaults, but they stop lenders from doing certain things. The “incurrence covenants” might, for example, prevent the borrower from taking on more debt if this boosted the leverage ratio above a certain level.

Parker cites an interesting example of how times have changed: Corialis, the Belgian aluminium systems manufacturer formerly known as Aliplast. In 2007 evergreen fund Sagard and mid-market firm Ergon bought a majority stake in a deal with a number of financial covenants. In 2014 Advent bought the firm in what Parker calls a “cov-loose” deal: there was a single leverage covenant, but with generous “headroom” that allowed leverage to rise considerably above its target without a breach. In January CVC Capital Partners was going to market with a loan to buy Corialis on cov-lite terms.

If these cov-lite terms sound like those in the bond market, this is no coincidence: one reason why these terms became widespread in Europe is because of the development of the European high-yield bond market in recent years. Larger borrowers have bargaining power with lenders because they can point out that if they cannot get cov-lite in the loan market, they can go to the bond market instead.

Another reason why cov-lite has become so prevalent, say market-watchers, is the globalisation of the loans market. “We act for a number of US sponsors,” says Davies. “Four or five years ago they were ringing us up and saying: ‘I can get this on great terms in the US’, where cov-lite had come in before the 2008 financial crisis.”

“Why shouldn’t it be the same in Europe?” says Thomas Smith, another London-based Debevoise finance partner, adding that, faced with increasing competition from debt funds, the banks were inclined to give in.

Industry observers do, however, see limits to the march of cov-lite.

“Cov-lite works best for investors for deals that are big enough to be liquid,” says Alex Neiss, a member of the corporate and acquisition finance team at Investec. “For pure cov-lite, there has to be enough liquidity to be able to come out of the loan pretty quickly.”

As a result, “for real mid-market deals” – rather than the upper mid-market – “cov-lite is still very rare”. Lenders are happy not to wrap the loans in heavy layers of covenants, but they want to be able to pass the parcel before the music stops, leaving them with a loan that looks in trouble and precious little ability to do anything about it. This, says Parker of Marlborough Partners, is why a higher proportion of deals are cov-lite in the more liquid euro-denominated market than in the sterling market.

In the European mid-market, the big innovation over recent years is, instead, the growth of unitranche: loans made by debt funds, with some deals involving one main tranche at an identical rate for all the lenders (aside from the “super-senior” call on the debt by the bank providing working capital), but others involving two tranches.

“Five or six years ago, unitranche in Europe was negligible, but now it accounts for 25 to 30 percent of the value of new European mid-market leveraged debt,” says Parker. “In a quite conservative market, which doesn’t move massively overnight, that’s a staggering change.”

The rise of cov-lite can also be seen as part of the same phenomenon as the recent fall in spreads above benchmark interest rates and the higher leverage levels on both sides of the Atlantic in recent years.

“With deals often significantly oversubscribed, it is a good market environment for sponsors,” says Nils Bartel, head of financing at Partners Group, the private equity firm, in Zug, Switzerland. “Margins have been coming down and terms are becoming more flexible.”

However, most observers also think that much of this phenomenon is cyclical, even if there is some structural change involved too.

When it comes both to leverage and to terms, “we are definitely hitting the top of the cycle”, says Neiss of Investec, citing the Corialis deal, done at a leverage ratio above 6. “Right now it’s very much a case of ‘everything goes’,” he says. “It wouldn’t surprise me if over time we saw a retreat from this.”

As to whether the cycle could turn this year, leading to stricter terms, “that depends very much on whether we see a macroeconomic or political shock that might cool the market and temper the deployment of liquidity”. In Europe, in particular, there are any number of potential triggers for this, say Neiss and others, including elections in France, Germany and the Netherlands.

GEARING UP
The US and European loan markets have both seen leverage levels creep up since the financial crisis. For European sponsored and syndicated deals, average total debt over EBITDA dipped from a 2007 peak of above 6 to a low of just below 4 in 2009, before hitting 5.1 in 2014 and remaining steady ever since, according to LCD, a division of S&P Global Market Intelligence. There was a similar trend in the US. Purchase prices multiples have also risen. 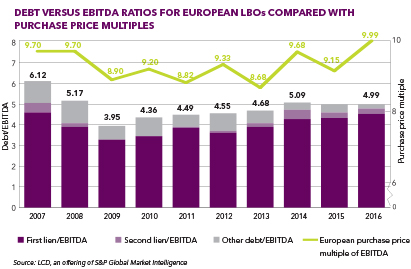 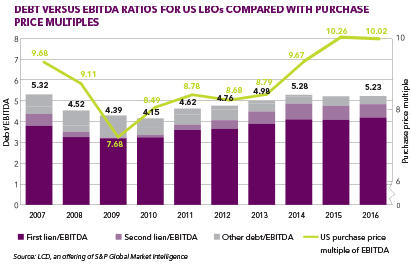 Q. HOW DO ‘ADD-BACKS’ BOOST LEVERAGE?
Within corporate finance, a debate is raging is over the role of the ‘add-back’. This involves raising the estimate of future EBITDA to what is known as ‘adjusted EBITDA’, by adding the extra earnings expected after the leveraged buyout.

Add-backs have always been used by private equity, and many are uncontroversial. The question is where to draw the line. Alan Davies of Debevoise & Plimpton gives the example of a manufacturing company that has two factories next door to each other, making identical widgets.

If it declares that it is going to shut one of the factories as soon as it has completed the purchase, while keeping the target company’s overall widget output the same, it is reasonable to assume synergies from this. “But what if it says: ‘I will put all these factories together over the next few years, and I want credit for the synergies now’?” The wisdom of adding this all back to EBITDA from day one is, he says, up for debate.

“The issue is when people add back things that are only expected to happen several years down the line, or may not realistically ever happen.”

“Add-backs have become more aggressive than ever before,” says Davies. “There’s no question about that.” He attributes this to the strong bargaining power held by sponsors at a time when there are so many lenders chasing a limited number of deals.

WHY LOAN PRICING IS BECOMING MORE SENSITIVE
If financial markets are defined as places where prices move up or down in response to various drivers, European leveraged loans was not really a market in 2007. It was, instead, more like a shop where store clerks would sell a product at a set price, and brook no haggling.

“Ten years ago, pricing for European leveraged loans was formulaic,” says Parker of Marlborough Partners. “If you wanted to a get a senior deal done there was a set margin to access it – typically around 250 to 275 basis points above benchmark interest rates – and that was pretty much it.”

Times have changed. “It’s a bit more of an active market, with prices that change in line with economic factors, supply and demand and relative value compared with other markets,” says Parker. As a result, in the last three years prices have generally oscillated between about 400 and about 500 bps, though he says that in recent months they have sometimes dipped below. Moreover, original issue discounts, where the borrower raises the effective interest rate by issuing the loan at below par, are disappearing.

Observers attribute the tight pricing to the strong supply of lenders, at a time when the number of potential transactions is relatively limited.