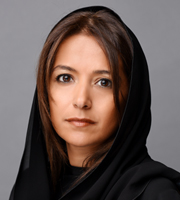 Huda Al-Lawati
What did your day look like when you were at Abraaj?
My responsibilities included everything from origination, evaluation, negotiation, execution and portfolio management to exit. I also had an overall monitoring and LP reporting role for my region and got involved in fundraising and LP discussions.

And what were the most rewarding parts of the role?
I joined Abraaj at a very early stage, and it went on to become the largest emerging markets private equity manager with almost $9 billion under management, and I am happy to have been part of that journey.

From a sector perspective, I’ve worked on power, oil and gas, education, retail, healthcare, food and a lot of other areas and sub-sectors within that. I even got exposure to tech. In addition, because in private equity you don’t just do a transaction and move on, you get deep into each business as an owner and manager – so you learn a lot.

What was behind your move to Savola Group?
As Savola is repositioning itself into a strategic investment holding company, I feel there is an entrepreneurial aspect to the role, and that’s something I enjoyed at Abraaj at the early stages. I also felt it was a good time for me to make a change and find learning opportunities. Savola began as a food company with an edible oil brand and over time made several other investments. It’s now the owner of Savola Foods Company, one of the region’s largest food businesses, and Panda, the largest grocery retailer in Saudi Arabia.

Given its acquisitive history and portfolio, Savola had already developed into a strategic investment holding company with a portfolio of consumer-facing businesses in food and retail. In the last two years there has been a formal relaunch of the group and brand to embrace and enhance that identity, hence the view to bringing in people like myself who have the private equity approach of looking at capital allocation, returns, value creation and really operating as an investment manager.

And what does your position at Savola entail?
There are three aspects to my role. There’s M&A – or more broadly, investments – which is making new investments within our core food and retail segments either through our existing businesses or by buying new businesses.

The second is portfolio management, which takes up a lot of time due to the sheer scale of the businesses we own. This aspect is about monitoring, offering strategic direction, value creation, management support and, when needed, turnaround.

And finally, an aspect that’s newer for me is investor relations. I’ve been involved in a lot of fundraising and LP reporting at Abraaj, but the requirements as a listed company differ, in addition to the fact that I am leading the function now.

In Saudi, Savola is considered to be one of the most well-regarded companies as far as transparency is concerned, but we can still see room for improvement and further engagement, especially as we build up our institutional shareholder base. We aspire to global benchmarks.