Which is the best vintage? For private equity LPs, that's a question that can define the success of their strategy. Our analysis of cashflow from funds dating back to 1983 suggests vehicles that made their first investments during the global crash from 2008 to 2010 – the 'financial crisis' funds – are starting to resemble the best-performing vintage year groups in terms of distributions.

Our research began in 2012 when investor sentiment for public markets was driven by the negative effects of the financial crisis and private equity investors were complaining about the 'lost year' of 2009 when capital calls and distributions slumped. This resulted in longer investment and divestment periods for many funds. Investors wanted to know whether this was just a one-off or whether similar cashflow patterns had previously been seen.

We compared the pooled ratio of distributions to paid-in capital or capital calls (DPI) of the funds for each year. The analysis showed big differences in cashflow patterns, with the roaring 90s comfortably outperforming the other groups with relatively consistent capital calls and early distributions and a breakeven in less than six years. Some had even returned capital after only three years because they were able to use the boom years to exit their companies. The original research was published in Private Equity International in November 2012.

Now we have decided to revisit the data, adding in a group for the 2008-10 vintages, the 'financial crisis' funds. The updated data covers more than 2,000 vehicles. 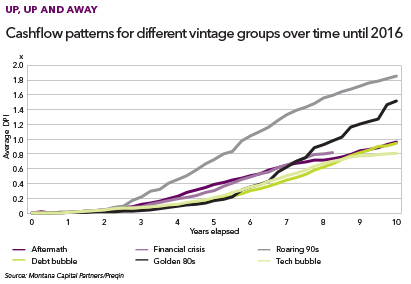 It's a fascinating insight because 2012 coincides with the opening of an exit window. The availability of low-interest debt coupled with increased stock prices fuelled the M&A market and refinancing opportunities. With central banks providing liquidity at very low interest, acquisitions became easier and strategic and financial buyers invested substantially.

The result is that the financial crisis funds resemble the best-performing vintage year groups such as the golden 80s, reaching a DPI of 1 after eight-and-a-half years and showing high distributions ever since.

The other vehicles to gain in our new analysis are the debt bubble funds which were characterised by an environment with high purchase prices for companies, an abundance of debt and very high competition. After the crisis hit the market, the underlying companies had to be rescued by the fund managers, refinanced and developed further on the operational side, which prolonged the value-creation process compared with other year groups.

It also took longer to invest the remaining open commitments of the funds resulting in many investment period extensions. Consequently, the divestment process has been moved back further due to overall lower M&A activity during this period.

This was the reason debt bubble funds were lagging in our previous analysis in 2012. However, as soon as the M&A markets showed signs of recovery, many fund managers took advantage of the more benign environment and increased asset prices, resulting in very healthy distributions during recent years, realising a lot of the net asset value and reaching a DPI of 1 in less than 10 years.

Over the last three years, debt bubble funds overtook the weaker tech bubble and aftermath funds. They had been perceived as some of the most risky funds, but ended up as a medium performer of the different vintage year groups, returned their full capital and with value creation left in some of their underlying portfolio companies. Even if the debt bubble funds started very slowly, they have ended up showing satisfactory investment multiples for investors, yet with lower IRRs due to the longer holding periods.

There are signs that M&A activity is continuing in 2017 or may increase compared with 2016. Many financial institutions' analysts expect activity and asset prices to rise further despite increasing political and regulatory uncertainty.

As long as M&A activity remains strong, this will contribute significantly to value creation. Strategic investors use their large cash reserves to finance acquisitions and central banks flood markets with liquidity. This should ensure that the good exit environment continues for private equity and should allow debt bubble funds to exit their remaining companies.

While the jury is still out for financial crisis funds, these are very promising: they paid back invested capital as quickly as some of the best-performing vintage groups and have additional value in the remaining portfolio companies. They will be able to demonstrate very attractive returns for investors, proving that the very good performance is not restricted to the early days of the industry in the 1980s and 1990s. 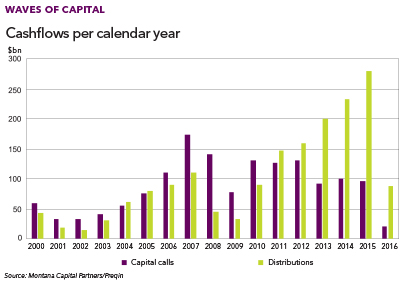 But we have to be cautious due to the uncertainty in the market as well as the relatively high valuations and the abundance of debt. It is time to focus not only on the return side, but also on assessing the risk of the investments. A market correction would change the situation significantly and the exit window would slow down or even close again.

It can be expected that more capital will be called and, therefore, drawn down over time, as the fundraising environment has been very active. The use of fund facilities to finance calls could lead to a situation where significant capital will be called in a short period. This means that the next few years should be interesting, characterised by greater volatility and more uncertainty than has been seen in recent years.