At its core, the business of being a placement agent – helping firms access investors and raise capital – has remained unchanged since the industry was created. There are several factors, however, that have made these groups modify the way they work.

For one thing, the universe of limited partners has grown tremendously, which has made placement agents indispensable to small and mid-sized general partners that can’t possibly know all of them.

Charlie Eaton, founder and managing partner at Eaton Partners, explains that for each fund his firm helps to raise, it has to contact, on average, 200 to 300 institutions, just to end up with about 20 investors in a fund of between $500 million and several billions. That translates into an ever-increasing number of points of contact with LPs, and much heavier lifting on the part of placement agents.

“That’s a big change,” he says. “Thirty years ago, there were maybe 25 to 50 large institutions, mostly public or private pension funds.”

At the same time, the number of fund managers has grown, and many of the vehicles are going after the same LPs. “There are many competitive funds in the market and so it takes a lot of work and effort to secure each commitment,” Eaton adds.

Another trend that has hit placement agents is the proliferation of in-house investor relations teams. Some of the large private equity firms have built teams that are larger than a typical placement agent. But that doesn’t mean the latter has become obsolete.

For those larger GPs, placement firms can help with an expansion in a specific country or with new products they’ve never raised before. 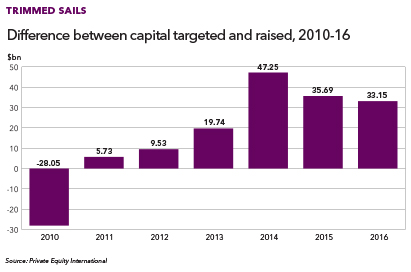 Some of the changes in the private equity world have also affected placement agents in a positive way. For example, the proliferation of first-time funds has been a boon for these firms, who can then help raise several early vehicles for a manager as it grows.

“Our role varies based on where GPs are in their life cycle,” says Alan Pardee, a managing partner and co-founder of Mercury Capital Advisors.

“If a new firm launches Fund I, the placement agent will be fairly involved as they grow and mature. They will have a stable relationship. We have many clients for whom we have raised four or more funds in a row. Once a firm has grown and is doing much of the fundraising on its own with a large internal team, there’s not much a placement agent can do other than helping in the back office or helping expand globally. After a few fundraisings, our role will be more targeted. We can always be the global diversifier.”

Another New York-based placement agent, who declined to speak on the record, says that firms he works with often come to him because they have tried to raise their first fund on their own but have hit a roadblock or failed to secure an anchor investor.

“First-time funds often don’t know how to raise money and they’re seeking institutional investors,” he says. “It takes at least one year to raise the money and by the 60th presentation, they’re completely fatigued, so I’m the psychiatrist. If anything, we found ourselves holding their hands.”

Placement agents must, however, be flexible on fees. Fees on fundraising have remained stable in the past decade at, on average, about 2 percent of the capital raised, which is paid quarterly over a 24- to 36-month period for smaller GPs. Some of the most successful GPs can sometimes negotiate lower fees.

Many placement firms have also long ago expanded into secondaries, advising LPs selling portfolios of fund stakes, a business where fees were initially very attractive.

“The primary placement business is a very difficult business and it’s low margin. With the secondaries business that’s a way they can do higher-margin business,” a secondaries buyer says. “It’s been as much a business response as it has been a client response, if you will.”

About a decade ago when the secondaries market was less efficient than it is today, advising a sale that would take less than six months to complete would pay as much as 200 basis points, according to a managing director at an advisory and placement firm. It made sense that placement agents, which have strong relationships with LPs, moved into that space.

But as the market became more efficient, fees plummeted, and they currently average about 20 to 30 basis points.

Firms already have had their eyes on the next sweet spot: GP-led transactions, which allow GPs to recapitalise or restructure existing funds, or simply offer LPs the possibility to tender. For advisors, these types of transactions still offer fees in the triple-digit basis points.

“What has really changed is the wave of GP-led transactions,” says Pardee.

“This is a new dynamic and complimentary to the fundraising business, since placement agents have relationships with GPs. These are very delicate negotiations and discussions to make sure all interests are balanced. For us it was a sensible thing to move into.”
The secondaries buyer confirms these types of deals are still nascent, but if they take off, they’ll be lucrative for brokers, as all parties — the GP and the LP advisory committee — need an advisor.

“All the advisors are really trying to figure out how to crack that GP-led transaction business because it’s a much higher margin business than trying to work with pension plans selling a $500 million portfolio when everyone is just willing to undercut the next guy on fees,” he says.

“There’s not a lot of value add there compared to GP-led. People are trying to spare more their resources toward these types of deals. To me, that’s what it’s about more than anything.”