The last few years have been a buoyant period for private equity fundraising, with global totals exceeding the $400 billion mark every year since 2013, according to PEI data. The $428 billion figure for last year nudged past the $427 billion recorded in 2015 and the indications are that limited partner appetite remains strong for an asset class that continues to perform well against a backdrop of low interest rates and a challenging yield environment.

The fact that so many funds now close beyond their targets – PEI data show there were 292 oversubscribed funds in 2016, up from 262 in 2015, totalling nearly $33 billion more raised than targeted – adds to the impression that LPs are falling over themselves to commit to private equity.

The natural assumption, therefore, would be that it has been easy to raise private equity vehicles and that it will continue to be so. Yet the reality is rather more complex. The bars funds have to clear today are higher than ever before.

“But the dollar amounts don't tell the full story. The reality is that there is a clear divergence between the haves and the have-nots. It's a crowded market out there and the fact is, you don't hear about the failures – there are an awful lot of zombie funds out there.”

Indeed, even though the value of fundraising increased in 2016, the volume of funds reaching a successful close decreased, from 720 in 2015 to just 664.

Part of this is to do with performance. “In the US in particular, private equity fund performance has been mixed,” explains Charles Daugherty, managing partner at Stanwich Advisors. “For the most part, it has been OK, but not outstanding as the returns from the 2007-08 period have impacted track records.” 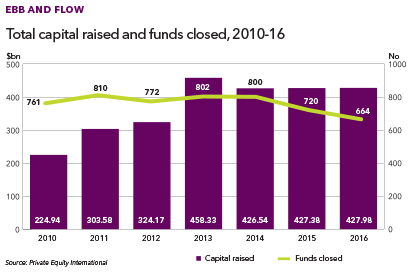 But LP evolution has also played a role. Large investors are now culling underperforming managers and reducing the number of relationships, partly to avoid having an index of private equity investments, but also to fine-tune their risk-adjusted returns and their exposure.

“While manager selection will always play a significant role in generating outsized returns, LPs are much more focused on how they construct their portfolios now that the market has matured,” says StepStone partner Jay Rose.

“They are seeking out not just sector or geographic focus in the funds they back, they are looking for specific strategies that meet their return requirements. With better portfolio management tools and options to dynamically construct a portfolio today, re-ups are therefore now far from automatic.”

This more active approach goes some way to explaining the rise of secondaries funds. These have been among the most successful over recent years, with 2016 no exception. Ardian Secondary Fund VII, for example, was the largest fund reaching a final close last year, at $14 billion, well above its $9 billion target.

“LPs are now far more willing to trade out of positions than they used to be,” says Eaton. “The secondaries market is becoming more active by the day. That's not always a bad thing as funds can use secondaries as a carrot to attract new investors, but it does mean that relationships aren't so stable and that re-ups are no longer a given.”

Added to this is the trend toward direct investments, co-investments and separately managed accounts, all of which take dollars out of the more traditional arena.

“However, new LPs focused on making fund investments are continuing to emerge and as such, there is plenty of opportunity to build relationships.”

To be successful, therefore, GPs must understand how to stand out from the crowd, proving not only that they target a specific area but that its team is uniquely placed to capitalise on that opportunity

In the last year or so many newer groups have managed to gain traction. Many of the more successful teams are spin-outs from larger groups that have faced succession or lacklustre performance issues, says Eaton.

He adds: “Out of the six funds we raised last year that were oversubscribed, five were first-time funds.”

So what should we expect over the coming year and beyond? Part of the answer lies with the economy and public markets.

“If we enter a more difficult economic environment, we will likely see distributions start to slow as GPs hold on to assets and wait for better times,” says Rose. “That may mean lower fundraising totals in the coming years, although I'd say we're heading toward a new floor for annual fundraising at around the $300 billion mark.”

One of the strongest tailwinds for high fundraising has been the high levels of distributions to LPs as many of the investments made over the boom period have been realised. With much of this capital now returned and some of it already recycled, the outlook is less bullish than it might have been 18 months ago. “Fundraising will get tougher over the next one to two years,” says Eaton. “The best managers will still get funded, but success will rely even more on funds being able to differentiate themselves by performance, strategy and team – and they will need to make sure this comes out very clearly in their marketing materials. First impressions really matter in a market where LPs are faced with a wealth of choice.”