Blackstone is riding high. It has persuaded institutional investors to entrust it with more of their money than any other manager of private equity capital in the world.

It topped the PEI 300 in 2016 – our ranking of the most successful firms in the world by money raised over five years – having amassed nearly $60 billion in commitments over that period. At the end of 2016, the firm had more than $43 billion in its various private equity strategies awaiting investment. The man charged with deploying $20 billion of that capital – the portion raised for buyouts – is Joe Baratta, global head of private equity.

So what is on the mind of a man sitting on $20 billion of dry powder? Interest rates.

The private equity industry has been taking full advantage of low rates for more than a decade, but that is set to change. In mid-March, the Federal Reserve raised interest rates by 250 basis points as the unemployment rate dropped to 4.7 percent in February and inflation moved closer to the Fed's 2 percent target. The Fed has indicated that rates are likely to rise in the next two years.

For Baratta, there is one over-riding message to take from this: the private equity industry cannot rely on rising purchase multiples for returns in the way it has in recent years.

Any GDP growth will not translate into strong corporate earnings growth, says Baratta, because of headwinds coming from higher wages, higher manufacturing costs for goods and services, and the rising cost of debt.

“That to me is the biggest risk,” Baratta says. “Many invest today assuming the low interest rate world will persist forever and the next buyer will pay the same high multiples. We don't do that.”

Acquisition multiples increased to record highs last year, reaching an average of 10.9x EBITDA in the US, according to a recent report from Bain & Company.

Blackstone's buyout team are now making assumptions in their models that the exit multiple environment will deteriorate and the amount of debt firms will be able to borrow as a multiple of earnings will be lower. Baratta is adjusting the firm's buyout strategy accordingly, putting a sharper focus on buying and improving assets that are out of favour where he feels it can drive earnings through cashflow improvements.

“That's leading us into companies where we can do a lot to them during our ownership to really transform the profitability, either through consolidation or operating margin restructuring, or by buying things that are out of favour,” Baratta says.

Blackstone invested $3 billion in the energy sector in the first half of 2016 as oil prices hovered around $30 a barrel. These investments represent about half of the total amount it put to work in private equity last year. It also invested in TeamHealth, a US hospital staffing business hit by the decline in value in some parts of the healthcare services sector. As well as these two sectors, Baratta identifies pharmaceuticals and some parts of the mining space as being subject to uncertainty, and therefore providing opportunity for the firm.

On the subject of operational improvement, Baratta says the firm has developed significantly since the crisis. “Our ability to act as a good custodian and value-added industrialist in our portfolio companies is way beyond what it was even 10 years ago,” he says, noting that the firm has improved on its ability to take advantage of the scale of its portfolio of companies.

For example, it is now able to purchase healthcare services and design benefit programmes for its portfolio companies' employees in bulk. It has become more sophisticated in human resources and in recruiting.

“We're just much more value-added rather than just engaging in financial engineering and capital market expertise, which is still an important part of what we do,” says Baratta.

Of course, every private equity firm is keen to tout its ability to implement operational improvement. LPs want to see proof points. Baratta's – and the deal he counts as his career highlight – was theme park and visitor attraction operator Merlin Entertainments Group.

It began as a £102.3 million ($125 million; €117.4 million) investment in 2005 out of Blackstone's fourth global buyout fund and turned into a £4 billion market-cap company through a series of acquisitions and development projects, including the purchase of Legoland properties.

“The initial acquisition was quite controversial because it was tiny and it came when we just raised the $20 billion fund,” he says, referring to Blackstone Capital Partners V, which closed in 2005 on nearly $22 billion, making it the largest fund ever raised by the firm. “It wasn't really what we should have been doing.” 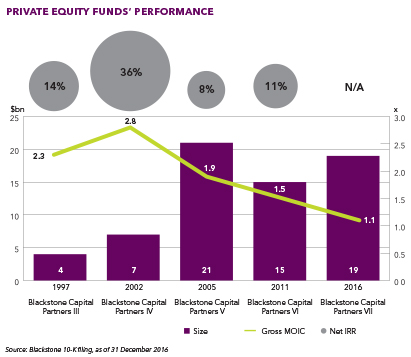 Before the Merlin deal, Blackstone had done few buy-and-build transactions. The work done with the group, says Baratta, cemented that strategy for the firm and these transactions now represent about one-third of the deals Blackstone completes.

Baratta was a senior managing director when he made the deal. He had joined Blackstone in 1998 and moved to London in 2001 to help establish the firm's European private equity business, working with David Blitzer, who was then head of Europe. He returned to New York 11 years later as head of global private equity.

Merlin was still owned by Blackstone when he moved back across the pond, but the firm took it public in 2013. “It all just kind of worked,” Baratta says. “It was good for the industry, for our private equity business and it was great for Blackstone. It's also a great calling card as we market it to other managers of small and medium businesses that want to become larger.”

Egon Durban, a managing partner at technology investor Silver Lake, who has known Baratta for nearly two decades, said, “With respect to Merlin, it's truly amazing the platform company they have built out of something that started as relatively small.”

While Baratta made his name on a deal that grew throughout the financial crisis to boast a reported 6.5x return on investors' money and an IRR of 30 percent, he also learned some tough lessons during that time. Blackstone invested in Tragus, an operator of casual dining brands in the UK including Café Rouge and Bella Italia, for about £270 million in late 2006, but lost investors' capital when Apollo seized control of the business in a debt-for-equity swap.

Baratta attributed the failure of the deal to timing and to the specific challenges of the restaurant sector, although it should be noted that similar vintage deals in the sector, such as Cinven's investment in Pizza Express owner Gondola, proved successful.

“Ultimately, we lost money,” he says. “We lost investor capital, which was painful. It obviously got hit hard by the financial crisis and the recession. Much harder than theme parks and visitor attractions.”

As the world emerges from the low-interest environment, LPs will hope lessons from both Merlin and Tragus are informing the firm's strategy.