Until last year, Japanese technology giant SoftBank was best known for adventurous moves in the technology and telecommunications sectors, in which billionaire founder Masayoshi Son has built up a business boasting a ¥9.55 trillion ($84 billion; €79 billion) market cap.

But, ever the pioneer, Son is not content to leave it there. SoftBank – which just six months ago was barely given a second thought by the private equity elite of Europe and North America – is about to hold a final close on its gargantuan Vision Fund, a tech-focused private equity vehicle with a $100 billion target.

Since Son launched the fund in October, scant detail has emerged, but here's what we know – and don't know – so far.

When it closes, the Vision Fund will be the largest private equity fund in history at almost five times the size of the previous largest: the 2007-vintage, $21.7 billion Blackstone Capital Partners V. It dwarfs other giants in the tech space, such as Thoma Bravo's $7.6 billion flagship fund, Silver Lake Partners' $10.3 billion fund and Vista Equity Partners' $10.5 billion sixth fund. 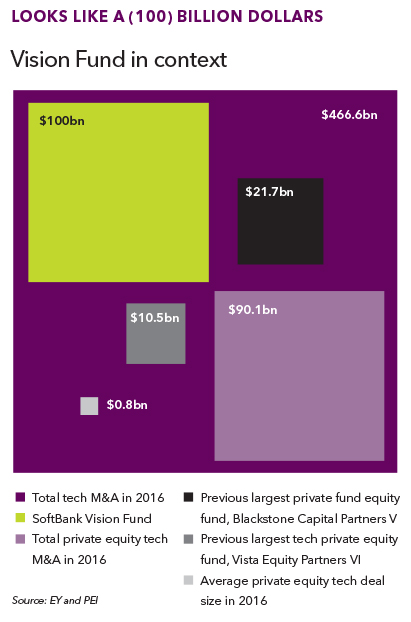 The fund was launched in partnership with the Public Investment Fund of the Kingdom of Saudi Arabia, which has pledged $45 billion. SoftBank itself has committed to fund a quarter of the total amount, and other investors include tech giant Apple, chipmakers Qualcomm and Foxconn and the family office of Oracle founder Larry Ellison.

“We've worked closely with SoftBank for many years and we believe their new fund will speed the development of technologies which may be strategically important to Apple,” the phonemaker said of its $1 billion commitment.

SoftBank is also reportedly awaiting a commitment of up to $15 billion from Abu Dhabi's Mubadala Investment Company.

The structure is expected to be “very traditional”, according to media reports, although it is unclear exactly what this means. Unlikely as it may be, if we were to assume a traditional fee structure of something close to 2-and-20, Apple would be paying SoftBank around $20 million a year in fees, and the PIF an eye-watering $900 million.

The Vision Fund is headquartered in London and will be managed by a team led by Rajeev Misra, SoftBank's head of strategic finance. Around a dozen people have joined the fund's team in London. Nizar Al-Bassam, former head of the financial and solutions group for central and Eastern Europe, Middle East and Africa at Deutsche Bank, and Dalinc Ariburnu, former partner and head of fixed income and currency sales in Europe at Goldman Sachs, have been appointed advisors to the fund. 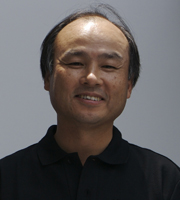 SoftBank has been keeping quiet on the fund's investment strategy but is betting on the future of connected devices and cutting-edge tech companies focused on artificial intelligence and robotics, as well as the “internet of things”. Son also said in January that healthcare and life sciences, “sectors far from SoftBank's core business”, could be potential targets.

The fund will be invested in both public and private markets within a five-year investment period. About half of the fund is earmarked for US companies, but deals may also include emerging markets. The fund could also re-invest into companies already backed by SoftBank, such as US satellite company OneWeb.

Certain investments have already been earmarked for the fund. SoftBank acquired a 39.9 percent stake in BC Partners-owned satellite operator Intelsat, which it plans to merge with OneWeb, for $1.7 billion. The firm will also reportedly transfer a 25 percent stake in UK-based semi-conductor business ARM into the Vision Fund for around $8 billion.

Son said in an earnings call that SoftBank expects “to pare down its debt in the coming years so that investments made over ¥10 billion ($90 million; €86 million) will be made through the fund”.

It is unclear at this stage how many assets SoftBank will be looking to hold in the Vision Fund or how long the fund will hold them for.

SoftBank recently agreed to acquire investment management firm Fortress Investment Group which will operate within SoftBank as an independent business and will continue to be run by its current leadership. Though Fortress will not be directly involved in the Vision Fund, Son has signalled Fortress's expertise could be shared to help make the fund a success.

There is also a personnel link worth noting: SoftBank Vision Fund head Misra had a brief stint working under Fortress's co-chairman Pete Briger when the latter was running its real estate and credit businesses.

At this stage it seems the Fortress acquisition is more about Son showing he's serious about turning SoftBank into an investment heavyweight. The firm manages more than $70 billion of assets – including private equity, credit and real estate – on behalf of more than 1,750 institutional clients and private investors.

“Fortress's excellent track record speaks for itself, and we look forward to benefiting from its leadership, broad-based expertise and world-class investment platform,” Son said of the acquisition.

Industry insiders have mixed feelings about the Vision Fund. They are equal parts incredulous at the fund's size, impressed with the speed of the fundraise, doubtful about the depth of the investment opportunity and nervous that such a large fund could drive prices up.

“Son is an extraordinary force and on a different planet,” one North Asia-focused private equity manager tells PEI .