It’s hard to sum up the last 18 months or so. On the one hand, huge political upheaval, uncertainty on future macroeconomic policy and troubling stock market volatility; on the other, continued boom years for private equity as investors plough more money into one of the only asset classes that can still deliver a decent – and fairly consistent – return.

The effects of these two market drivers can be seen clearly in this year’s PEI 300. With total capital raised in the last five years by the industry’s 300 largest firms standing at $1,352 billion – the highest since we started this ranking in 2009 – private equity has been an overwhelmingly popular choice for investors since 2012. (This year’s ranking takes into account capital raised between 1 January 2012 and 1 April 2017.)

Macroeconomic uncertainty has also meant a flight to quality – or at least to the familiar. The five-year fundraising total for the top 10 firms this year, at $320 billion, accounts for 23.8 percent of the total capital raised. This is an increase from 22.9 percent last year, and 20.9 percent in 2015.

The top 10 is once again dominated by North American firms, while in Europe, huge fundraises from the likes of Apax Partners, Cinven and Permira have propelled them up the rankings. 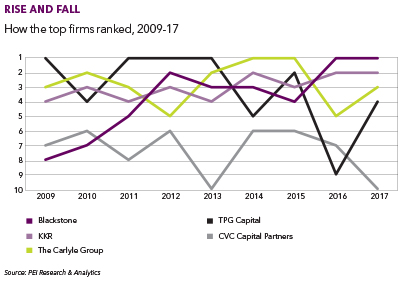 A stark change can also be detected in our top 50; this year, those firms raised a combined $757 billion, a 16 percent increase on last year and a 36 percent increase from 2015’s $558 billion. This is despite Blackstone and BDT Capital Partners, the firms ranked first and 50th respectively, having lower five-year fundraising totals than those in the same positions – Blackstone and Montagu Private Equity – in 2016.

There had never been a more definitive leader of the PEI 300 than Blackstone in 2016. The firm swept in from fourth place having amassed more than $30 billion in a year to claim the crown for the first time with just shy of $60 billion.

It’s no surprise, then, that Blackstone is still at the top. Last year was a more modest one for the firm, with $16.9 billion raised for private equity. It was enough to secure its spot for another year, but not to widen the gap between the firm and its peers.

In fact, the other industry mega-firms appear to have taken up the challenge laid down by Blackstone. Second place KKR is hot on its heels, closing the gap on its rival by $8 billion to $16.7 billion this year.

Henry Kravis’s firm had a record fundraising year last year, raking in $29 billion, thanks in large part to its 12th Americas-dedicated fund. KKR Americas XII, the majority of which was raised during 2016, held a final close on $13.9 billion in March, above its initial $12 billion target and including a GP commitment of almost $1.4 billion.

“We believe 2017 is going to be another active fundraising year as we scale our newer businesses and also focus on Asia private equity,” Scott Nuttall, KKR’s head of global capital and asset management group, said on the firm’s fourth-quarter earnings call in February.

KKR is looking to raise $7 billion for its third Asia private equity fund, and will make another hefty GP commitment to that vehicle – at least $750 million, according to a Minnesota State Board of Investment advisory board memo.

The Carlyle Group – which surrendered the crown to Blackstone so spectacularly last year – is also back with a bang, with a five-year fundraising total $10 billion higher than when it was in the top spot in 2015.

And the firm has big plans on the fundraising front. During the company’s fourth-quarter earnings call in February, co-chief executive David Rubenstein reiterated his plan to raise $100 billion between 2016 and 2019.

“We’re confident that we can raise the money we’ve set out to raise because the track record is pretty good,” said Rubenstein. “We’ve already been in the market talking to investors early this year and last year about some of these large fundraises.”

One thing’s for certain: LPs still have plenty of distributed cash burning holes in their pockets, meaning 2017 is likely to be another strong fundraising year. With many of the industry’s largest firms having already raised their latest flagship vehicles, it will be interesting to see where that capital finds a home – and what this list will look like next year.