This year’s PEI 50 firms continue to generate superior returns on average compared with the PEI 10 and the wider PEI 300, according to data provided by private equity technology group Bison.

The top 50 firms by amount of capital raised over the last five years generated, on average, a net internal rate of return of 14.11 percent since inception, higher than the PEI 300’s 12.9 percent net IRR and higher than the PEI 10’s 13.48 percent. Bigger, therefore, is not necessarily better-performing. 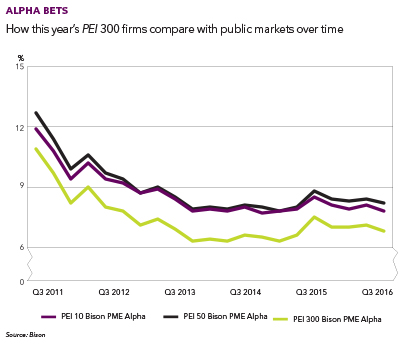 While absolute returns are falling, a concern widely noted in the industry, the difference between the performance of the PEI 300 and the public markets – as shown by Bison’s ‘PME Alpha’ data – seems to be increasing. While this year's cohort of 300 has seen its performance improve over time, it compares less favourably with last year’s 300, which at that time was able to demonstrate slightly better returns.