More than six years after the Arab Spring, the Middle East and North Africa region has yet to solve its image problem.

The picture reaching international investors through the media is difficult to avoid. From Syria’s sixth year of civil war and ongoing refugee crisis, to conflicts in Iraq, Yemen and Libya, it’s small wonder the region can cause jitters.

Even so, perennial big players such as The Abraaj Group stayed active through 2016; the firm staged its second North African healthcare IPO in June and closed its first Turkey-focused fund on $526 million, despite a mid-year coup attempt. 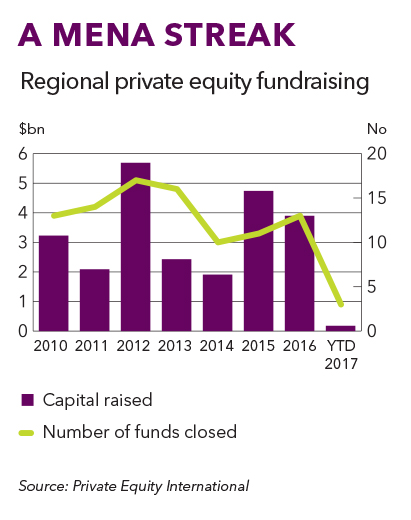 However, raising this kind of capital is no small feat; other GPs may have more LP scepticism to contend with. Hani Ramadan, head of private equity for Waha Capital Partners, has been on the trail for the Abu Dhabi-based firm’s debut third-party fund, and says he deals overwhelmingly with regionally based LPs.

“I’ve had some discussions with development organisations from Europe, and some sovereign wealth funds in Singapore and Malaysia, but being a first-time fund, it’s a much easier proposition to raise funds from the Gulf. Most of the commitments we’ve gotten have been from Saudi Arabia,” he says.

“International investors are more comfortable investing in an emerging market when it’s a second-time fund. People are nervous about the region, and some international LPs have invested in some of the regional funds without seeing decent returns for the risks they’re taking.”

Helmut Schuehsler, chief executive of TVM Healthcare Partners, agrees that the region has an image problem.

“Nobody has a strategy for the Middle East, so many investors don’t even know who to talk to. It always seems to fall between the cracks because it’s not really Asia, it’s not really Africa and it’s very small.”

For Schuehsler, convincing LPs to invest involves showing that the Gulf Co-operation Council countries in which TVM operates offer a stable, fast-growing environment for healthcare deals.

“I think people overlook the fact that the GCC countries have a very different strategy to grow their economies; it’s an investment-led strategy, so they’re putting money into infrastructure and education, and of course, healthcare.”

DEALS AND DIRHAMS
Annual deal volume in the MENA region has historically been relatively low, surpassing 75 only once in the past decade, according to PitchBook.

The deals that are being done gravitate heavily toward growth capital, says Schuehsler, an evolution from the buyout-heavy early days of the Middle East’s private equity industry.

“In Dubai there’s a lot of excitement about the venture capital industry and IT specifically; a lot of retail shops and restaurant chains get started that way. Deals are very much consumer-oriented, as well as financial services, healthcare and education. Those are the most sought-after type of investments.”

Ramadan’s team at Waha is looking at healthcare and consumer investments in Egypt and Morocco.

According to the latest Spotlight on North Africa Private Equity compiled by the Africa Private Equity and Venture Capital Association, 139 deals were reported from 2010 to the first half of 2016, with Morocco and Egypt attracting the most and second-most investment interest, respectively.

Actis has been a major player in North Africa, attracted largely by opportunities in consumer goods, education and healthcare. According to Hossam Abou Moussa, a partner in its Cairo office, these sectors are fuelled by a large young population with a connection to the developed world, growing brand awareness and demand for consistency and quality in products.

“That story is there in Egypt, it’s there in other North African countries, and it will not go away with political crises or any change in the geopolitical environment,” he says.

“Behind the story, the winners will be well-run market leaders. This has been our strategy: going after market leaders in sectors we understand, with businesses that benefit from these trends – and if there’s no market leader to go after, we try to build one through a buy-and-build process.”

Actis took this approach in the payment space, acquiring companies in Egypt, Jordan and South Africa to create Emerging Market Payments, which grew to have the largest footprint in Africa before being sold to a global strategic buyer in March 2016.

Another sector of emerging interest in North Africa, given demographic trends, is education. The firm is currently investing in universities to build a pan-African education platform.

“Tunisia and Morocco attract students from across francophone Africa because the best institutions there can offer a great education, aligned with what employers in the region demand from graduates,” says Abou Moussa. “It’s also significantly cheaper and easier to apply to than alternatives in Europe or further afield.”

KNOWN UNKNOWNS
“Investors in general don’t like risk, and the best definition of risk is uncertainty,” says Abou Moussa. “If we have better understanding of the market and the sector, we can define the uncertainty, and have a better evaluation of the risk.”

One persistent risk Actis had difficulty assessing, he says, was Egypt’s currency. The Egyptian pound had been propped up for years by the country’s central bank, even as a black market developed that diverged from the official rate. In November, however, to meet the IMF’s conditions for a $12 billion loan, Egypt allowed its currency to float freely – and it quickly lost half its value.

Schuehsler says the sudden devaluation – alongside a declining lira in Turkey – did hit TVM’s portfolio companies. “Even star performers, if they’re using Egyptian pound or Turkish lira, they looked pretty bad in US dollar terms.”

However, TVM was by no means unprepared. Years earlier, they had invested in Ameco Medical Industries, a medical device manufacturer that makes a range of catheters. These products were already manufactured at a low cost, so the devaluation of the pound made them extremely competitive, says Schuehsler.

“When we made the investment in late 2014, we expected a devaluation. Our calculus was: if it happens, our revenues for the company – about half of which were in Egypt – would go down, but only in Egypt. If we reduce our manufacturing costs by a big margin, our exports to the US and Europe – which we wanted to drive with our investments – would make this a very profitable company.”

For Abou Moussa, the devaluation has removed one of the biggest uncertainties impacting Egypt and North Africa in recent years.

The government in Egypt is also addressing its budget deficit through heavy public spending cuts, creating room for the private sector, says Noaman Khalid, an economist at CI Capital Asset Management in Cairo.

“A clear example of this is healthcare. To level up our healthcare service per capita, we need to increase the aggregate spending on healthcare by around 200 billion Egyptian pounds. Right now, the government only spends around 60 billion pounds, and the differential can only be covered through private sector.”

While the GCC countries are, of course, in better shape than Egypt, Schuehsler says the impact of lower oil prices on budgets has been felt in that region’s own traditionally public-driven healthcare sector.

“There’s budget for healthcare being cut left and right, and we see a preparedness to consider that the public sector should actually reduce its involvement in healthcare as an owner and provider, and become more of a buyer.”

While Egypt’s devaluation and the Gulf’s cutback on public spending have hit some sectors in the short term, there are long-term benefits. The World Bank expects regional growth to improve slightly to 3.2 percent in 2017 and 3.6 percent the following year, citing governments’ consolidation of their finances and their diversification away from oil.

“I’m positive on our economy, especially amid signs of a global economic recovery,” says Khalid. “No one else has hit rock bottom as we have; no other country has decided to take such dramatic measures.”