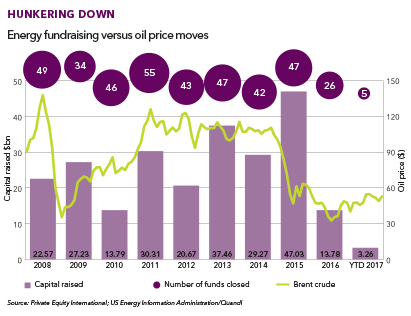 There is a something of a chill blowing through energy fundraising, as the unpredictable fluctuation in oil prices deters investors.

PEI data for energy funds that have reached a final close shows a sharp slump in energy fundraising over the last 18 months. Some two-thirds of funds have failed to reach their targets in the year to date. Energy funds also raised less than expected in 2016, after a bumper 2015.

Despite the oil price slump in 2015, energy fundraising hit record levels as fund managers looked to capitalise on distressed assets and businesses looking to raise capital as low oil prices persisted. There had been some hope that the rise in oil prices in early 2016 would boost fundraising, but price volatility seems to have put off limited partners.

Only $13.78 billion was raised from funds closed in 2016, a post-crisis low and less than a third of 2015 levels when $47.03 billion was raised. The biggest fund to close over the last 18 months was the $2.77 billion Carlyle Energy Mezzanine Opportunities Fund II.

The data was compiled from fund closes in the energy sector, including strategies that target the renewables sector. The fundraising data applies to private equity energy funds and excludes pure infrastructure funds – which are those regarded as investing in assets in the mid-, downstream and renewables sectors. For the funds in market data and top 10 closes we expanded the data pool to include infrastructure and hybrid funds – those energy funds that combine infrastructure and private equity characteristics.