There's much talk about the impact a subscription credit line can have on fund level performance. It's generally accepted that delaying capital calls will boost internal rates of return and that the cost of a facility – even in a low interest rate environment – will have a dampening effect on the money multiple that ends up in the pocket of the investor.

Private equity advisor TorreyCove Capital Partners attempts to model what that effect would look like in practice in its report Subscription Credit Lines: Impact on GPs and LPs .

The report presents two scenarios: a 'traditional' equity-only investment, in which a $100 million fund is deployed in a single $100 million transaction in year one, and a $100 million fund in which a credit line is used and capital is not drawn down from investors for the first two years of the fund's life. The second scenario assumes 100 percent debt financing of fund assets for two years, which is extreme. None of the GPs Private Equity International has spoken with say they would leave a facility outstanding for more than 365 days. The scenarios are then placed into two hypothetical situations: one in which the funds perform well and the other in which they underperform. 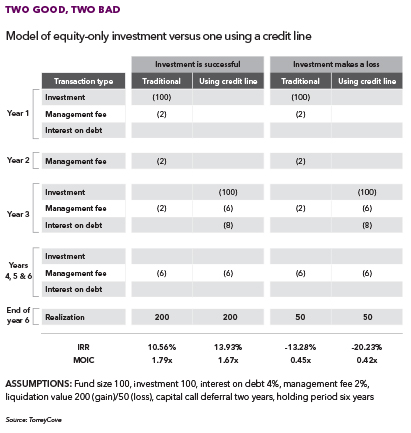 Assuming the funds perform well – realising $200 million at the end of year six – the credit line offers an IRR boost of 300bps, while the MOIC was negatively affected by 0.12 turns.

The effect of the credit line is amplified if the funds make a loss. Here we see a negative impact of almost 700bps on IRR and 0.03x MOIC.

What's more, the use of a credit line can be enough to push a fund 'into the carry' – even when the return on the underlying assets is not sufficient to achieve the preferred return.

In a third hypothetical situation, TorreyCove assumed a $100 million fund with a 2 percent management fee making a single investment of $100 million in year one using LPs' capital had a net IRR of 6.63 percent after six years. 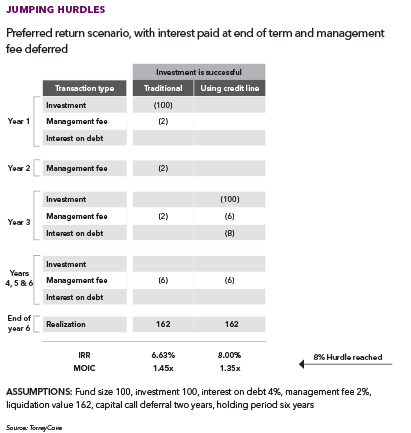 If the fund had used a credit line and only called capital from LPs during the third year, it would lead to an 8 percent IRR, the typical industry-wide preferred return hurdle. This is despite the MOIC decreasing from 1.45x to 1.35x.

While this is clearly of benefit to GPs, from an LP perspective, the effect is “neutral at best, and more likely to be negative”, TorreyCove argues.

“Traditional credit lines can be convenient in case a GP has to move quickly to try and close a deal and doesn't want to wait and make a capital call,” TorreyCove senior vice-president Tom Bernhardt says.

“But if GPs are going to start using them for longer periods of time, which is what we're starting to see, that can be problematic. While the higher-stated IRR is a clear benefit, LPs need to consider whether higher 'paper' returns are really enough to balance the costs and downsides of using credit lines in this way.”

The use of credit lines by GPs not only distorts fund performance, but makes comparisons between funds more challenging.