When KKR collected a whopping $9.3 billion for its third pan-Asia vehicle industry reaction ranged from admiration to scepticism.

One LP in Singapore called it “a testament to the tremendous opportunity LPs see for private equity in Asia”. But the fund, the largest in the region’s 20-year history, also raised questions about whether such a large war chest could be effectively deployed. 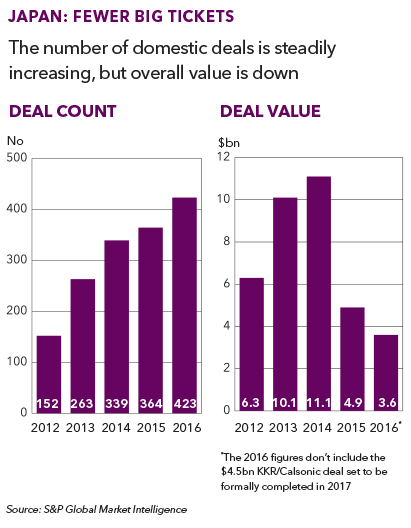 KKR’s answer is to explicitly set its sights on corporate Japan. As Bloomberg noted, the country has not played a significant role in the firm’s dealmaking history. Now the firm is looking to change that, targeting “larger carve-out and cross-border transactions”, according to its Asia private equity head Ming Lu.

KKR is not the only global bulge-bracket firm with serious operations in Tokyo – The Carlyle Group has its $1 billion 2013 Japan-focused fund and Bain Capital a $4 billion 2015 Asia buyout fund – but it certainly has the most capital to invest.

The performance of KKR’s Asia funds has been solid; the $6 billion 2013 Fund II had generated a 1.3x net return and 20.6 percent net IRR as of 31 March this year, and Fund I, a $4 billion 2007-vintage, returned 1.8x net and 13.7 percent net IRR, according to the firm. In order to build on this record with a larger fund, KKR must face some specific Japanese challenges.

The first is a simple question of dealflow; is there enough of it – and in sufficient value – to absorb a meaningful share of $9.3 billion? One Japanese GP notes this has not been the case so far – 423 private equity and venture deals worth $3.6 billion were recorded in Japan last year, none larger than $600 million. He concedes a handful of large deals could change this very quickly.

The second is the historical conservatism of the family-dominated Japanese corporate landscape and the nature of ‘Japan Inc’. Certain businesses, viewed as strategically important for the country, are off-limits to foreign buyers and some industries, such as power and technology, are too heavily regulated to be considered investable.

But that is changing. Claudia Zeisberger, a professor for entrepreneurship at INSEAD, says that among Asian family business owners: “There is a greater awareness of private equity and the value a private equity partner can bring to the table.”

At the same time, there is a change in political thinking and a push to improve corporate governance that is encouraging restructuring and divestitures. As the environment in Japan tilts towards private equity, KKR is well-positioned to take advantage, and not just because of its financial firepower. “KKR has a reputation of getting carve-outs done and doing them in a way that is acceptable to the business community at large, especially in Japan,” notes Zeisberger.

The firm has completed four Japanese corporate carve-outs in the last three years with a total enterprise value of nearly $8 billion. In the first quarter of this year, the firm struck nearly $6 billion-worth of deals in the country, snapping up Calsonic Kansei, a Nissan Motor-backed auto parts manufacturer for $4.5 billion as well as power-tool maker Hitachi Koki for $1.3 billion. The $2.3 billion acquisition of Hitachi Kokusai Electric should soon be added to the list.

As the dealmaking potential of Japan is unleashed, KKR is armed with the capital and expertise to participate. If the private equity momentum in the country stalls, however, it may find itself left with a mountain to climb.