The Public Officials Benefit Association, with 10.3 trillion won ($9.1 billion; €8.1 billion) of assets, was a trailblazer into private equity, ahead of its Korean pension manager peers. It now allocates more than half of its portfolio to alternative assets.

But as it faces increasing pressure to deliver investment performance in a low interest rate environment it plans to step up its alternatives exposure, ploughing an additional 700 billion won into the strategy.

And it's not alone. South Korea's 558 trillion won National Pension Service, the world's third largest pension, said in March it is planning to increase its holdings of foreign and alternative investments from 31.3 percent in 2017 to up to 40 percent by 2021, following the Ministry of Strategy and Finance's asset allocation plans.

The 5.4 trillion won Government Employees Pension Service has a target allocation of 24 percent of its total assets for alternatives by 2021, and the 14 trillion won Korea Teachers Pension Fund a more ambitious 40 percent over the next three years.

POBA's chief investment officer Jang Dong Hun tells Private Equity International it started investing in alternatives more than 10 years ago, suffered through the global financial crisis and learned its lessons. “We learned lessons from our failures in the past, such as in some solar energy investments, whose valuations were hard to predict. Long-term perspective analysis is important for alternative investments to be successful,” he says.

In May this year, POBA handed out $300 million to foreign private equity managers across five different strategies.

Korean pensions are overweight in fixed income – as much as 70 percent to 80 percent of their portfolios historically – compared with the portfolios of European or US pensions, explains Jang. And because of the sensitivity of interest rate movement as well as the foreign exchange rate, Korean pensions suffer more compared with other global pensions. He adds that pensions generally look for a weighted average yield of around 4.5 percent, which has become harder to achieve with fixed income and bonds yielding less than 1.5 percent.

Some are even actively pursuing private credit and pushing for investment opportunities with regular cashflow and less volatility.

“In the Korean market that kind of investment opportunity is still pretty much dominated by commercial banks, but the government is changing the investment landscape by revising laws related to private equity but this will take time,” he says.

POBA's investment strategy is “quite conservative” and focused mostly on developed markets, Jang says. The pension fund is also in the process of establishing an overseas private equity portfolio concentrated mostly in the European and North American markets.

There is a reason Korean pension funds are going overseas. Lee Jae Woo, co-founder and chief executive of VOGO Fund Asset Management, argues pension fund sizes are increasing and it is hard to achieve required returns from investing in conventional fixed income and bonds because interest rates are so low.

“In the case of NPS, the growth rate of its assets averages 10 percent a year, while the Korean capital market is increasing by just around 4 percent,” Lee says.

“This means that the growth in pension fund money is much faster than Korea's capital markets. Therefore, there is no option but to go overseas.”

Elizabeth Oh, head of investments advisory, Korea at Mercer, agrees that the low interest environment and limited investment opportunities in the domestic market are driving the pension funds to increase overseas exposure. “They're aiming to diversify their portfolio and sources of return by allocating more to overseas markets. Alternative investment is one of the areas in which they are keen to invest further as evidenced by various new mandates from private markets, hedge funds and real estate,” Oh says.

She points out that within alternatives, Korean investors are also diversifying into new strategies. For instance, private market investors are invested in buyout, credit, mezzanine, distressed, secondary and venture capital commingled funds, as well as separately managed accounts and co-investments, which is increasing gradually among Korean pension funds.

“Although they have built up their portfolio based on buyouts, they're now expanding portfolios to include co-investments and secondary investments, aiming to diversify strategy, vintage and risk with less J-curve effect. We could see more mandates for co-investments in various pension funds,” Oh says. 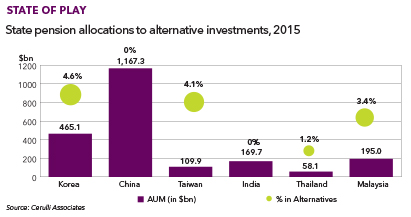 A Seoul-based GP also tells Private Equity International that local Korean pension funds are encouraging their fund managers to invest more in overseas assets because the domestic market is too small.

“The frustration, however, is that there are not enough capable local players who are experienced in cross-border transactions,” the GP says. “This has led some pensions to put more capital in foreign firms well-versed in this space.”

Korean state pension funds have also received a government directive to increase allocations to overseas and alternative investments annually by two to three percentage points, according to an April 2017 report from research firm Cerulli Associates. And institutions will be further encouraged by good returns from the asset class. The NPS, for example, saw its global alternatives portfolio, which accounts for 11.4 percent of its total portfolio, as its best-performing segment in fiscal 2016 with a return of 12.3 percent relative to other asset classes.

It is thus not surprising that many Korean institutions are beefing up their exposure to alternatives, aiming to have at least a 20 percent allocation before 2020, the report adds.

“Korea has an ageing demographic structure and Korean pensions will enjoy capital inflow in the next 10 to 20 years, which means the size of the pension funds will expand very rapidly,” Jang says.

“The important thing to address now is how well prepared we are to meet that future.”