More recent studies, however, are beginning to converge on a simpler answer – and it isn't pretty.

“If you look pre-2006 it doesn't matter. Private equity outperformed the public market by a wide margin, even accounting for leverage,” says Steve Kaplan, professor of finance at the University of Chicago Booth School of Business, and an author of the 2013 study.

“Where it gets less clear is if you look 2006-13. It shows you are slightly better in private equity, but if you put on leverage it's not as good as the public market.”

Josh Lerner, a professor at Harvard Business School, says: “When you look at most of the academic studies they now tell a consistent story. Pre-financial crisis, private equity funds had public market equivalents [PMEs] that were considerably greater than 1, up to 1.3 or 1.4, implying returns that were 30 or 40 percent better than the public market. But since the financial crisis, the PMEs have been closer to 1.” 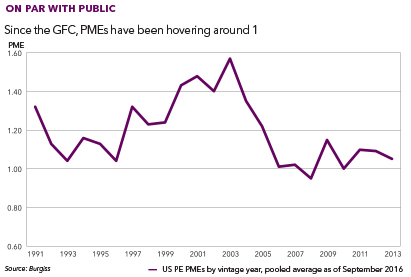 An influx of yield-hunting capital since the financial crisis and increased competitiveness have tempered the spread between private and public market returns.

On this basis, the answer for an LP is simple: buy into a pre-crisis fund or accept, on average, a public market return.

Well, not quite. Because any discussion of performance prompts the question: how do you measure – and compare – returns?

The industry has tended to use IRR – the internal rate of return. The problem, academics say, is that the IRR assumes that cash proceeds have been reinvested at the IRR over the entire investment period and so “is very easy to manipulate. Net present value would be a better measure. It's the only thing we teach in finance and there is a good reason for it”, says Ludovic Phalippou, associate professor of finance at Oxford Saïd Business School.

The ease with which IRR can be manipulated may ultimately be its downfall, with the growing use of fund-level leverage – borrowing against undrawn LP commitments – threatening to undermine it.

“GPs are doing the industry a favour by promoting fund-level bridging,” says Oliver Gottschalg, associate professor at HEC Paris and head of research at advisory firm Peracs, “because it dramatically distorts the IRR and allows the first capital call to be pushed back by six to 12 months. This alone can put 30 percent of funds into the first quartile.  And the smart LPs are saying 'this can't be true'. So you have an arms race – and GPs are trying to game it as much as they can.”

Lerner agrees: “Capital call lines are going to force change. GPs are drawing down capital later and later and, taken to the extreme, everyone will have an IRR of infinity because they will drawdown 15 minutes before exiting the deal.” 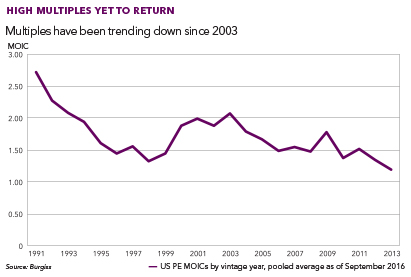 To remedy the weaknesses of IRR and multiple (which ignores the opportunity cost and the time value of money), as performance measures, Gottschalg has helped develop a measure – Peracs Alpha – which calculates returns in three ways, including an absolute return, corrected for the biases of standard IRR. The goal, he says, is to ensure investors “have no more excuse” not to switch from IRR to an alpha performance measure.

So if investors measure performance more accurately, will they be able to pick winners every time? No. Because then there's fees.

“Private equity fees have absorbed all outperformance,” according to Phalippou.

A 2015 paper he wrote examining private equity fees found US LP giant CalPERS had paid around $2.6 billion in fees on private equity over 13 years and $3.4 billion in carried interest. The ensuing controversy helped push forward a change that was already underway for GPs to refund transaction fees.

But Phalippou says this move to refund fees doesn't tell the whole story. “On paper GPs refund 100 percent of transaction fees but some may write five pages of exceptions. For example, you see exceptions that state the refund will only apply if the fee was more than 1 percent of the cost of the deal, or it's fees excluding the cost that you incurred for sourcing the transaction, a cost you come up with yourself.”

Gottschalg says the issue is identifying the good fees from the bad.

“The question is: how much is fees and how much is alpha? There are a bunch of managers that get carry fees for generating little or no alpha. Misuse of carry is that it is paid on absolute returns, and in some economic times absolute returns are really easy to generate. At other times they're really difficult. So what you should track is what you are paying carry for – ideally this is when the GP adds value. Why not an incentive scheme that rewards alpha? Not on absolute dollars over hurdle rate.”

But one multibillion European LP says measuring performance by alpha rather than IRR and multiple is not a silver bullet. “Using alpha has the same problems as IRR and multiple – how do you benchmark and extract the actual performance? Defining an absolute risk-free rate of return across different managers in different geographies is not easy.”

Manager selection, the LP says, should not be an entirely objective exercise and must incorporate subjectivity. “The question should be: is the manager fit for the future? Have they adjusted strategy and adapted to market movements?  A GP following a $4 billion fund with a $12 billion fund has, effectively, no track record.”

A 2013 study led by Robert Harris at the University of Virginia's Darden School of Business supports this approach, finding that “persistence” – the idea that a private equity manager that has performed well in the past will perform well in the future – is largely a myth.

Past performance may be no guide to the future but the studies all agree that in any given cycle and regardless of fees, some managers will outperform their peers. But identifying those managers with just metrics is far from simple.

NEW STUDY RAISES MORE QUESTIONS FOR GPS
Josh Lerner at Harvard Business School recently concluded a study analysing the link between fund ownership economics and performance. He says the results should prompt more LP questioning. “We worked with one large global LP looking at the last 750 funds they had done detailed due diligence on and looked at how carry and ownership of the fund was split between partners. We found the division of carry and management company ownership is uneven and has very little to do with the performance of deals attributed to that partner. We conclude that founders of many firms prefer to have a bigger share of the pie even if that means the overall pie is smaller.”