In recent years, private equity firms have been spending more time on creating value through operational improvements within their portfolio companies, prompting a greater focus on carve-out companies that need improvement.

For example, Apollo Global Management agreed to purchase a majority interest in Lumileds, a supplier of LED components and automotive lighting, from Royal Philips, which is refocusing its business on health technology, in December. Clayton Dubilier & Rice agreed at the end of May to buy a majority stake in consulting firm Capco from FIS, a financial services technology company.

Private equity firms completed 659 carve-out transactions globally in 2016, totalling $232 billion in value, compared with 672 deals representing $192 billion in the prior year, according to Dealogic. This was the highest since the record of 928 transactions worth $295 billion in 2007. 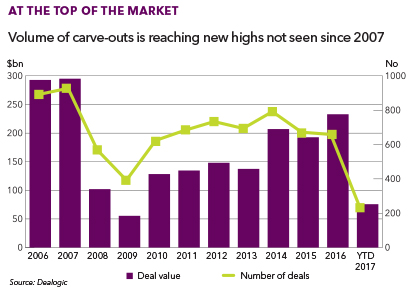 Just as a decade ago, the industry has large coffers of money to invest and is facing high valuations, often above 10x EBITDA. In such an environment, carve-outs can present lower entry points into companies.

“I believe carve-outs have been more interesting in the last two or three years, because they're difficult to do, so in a high-price environment it may mean there's less competition,” says Rob Seminara, a senior partner at Apollo.

These transactions can be cheaper for several reasons. Private equity firms may find these opportunities through an auction process or after a failed auction process, which means competition is lower. The complexity of carving out assets from large corporations also typically means fewer private equity firms are willing to take them on. Finally, firms such as CD&R and Apollo have been able to reduce pricing by allowing sellers to retain a minority stake in the business, as was the case in the Lumileds and Capco deals.

“Sometimes, a seller needs to sell an asset at an inopportune market time or when a business is in transition, which may result in a lower purchase price,” Seminara says. “In that event, having the seller retain an equity stake could be helpful, as the seller would participate in the upside as the business or market improves.”

“We will often develop a relationship with a potential seller years in advance and bring them ideas about what is possible with a business,” says Nate Sleeper, a partner with CD&R. “If we can solve a problem and create value for a seller, that typically means we can create a deal that has an attractive risk-return for our investors.”

It remains to be seen whether the volume of carve-out deals will continue in the same trajectory or whether a downturn will make those deals less attractive. For 2017, as of the beginning of June, there had been 232 transactions totalling $75 billion globally, according to Dealogic, which would indicate a slowdown if dealmaking maintains that pace. Private equity firms will be watching the second half of the year closely.