The financial crisis disrupted the natural investing and harvesting cycle of many funds that were formed prior to 2008, thereby delaying the development of some of the companies GPs had invested in. As these funds come to the end of their term, many still have assets with considerable value that remain unsold, but still have significant upside potential. 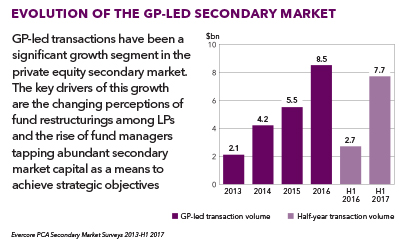 What are the typical ways that a GP can create liquidity for their LPs?

There are three main ways. One is they sell their portfolio companies in the ordinary course of business. The second is for the GP to organise a tender offer process, where they present an offer from a secondary investor to their investors and (sometimes) require the new secondary investor to make a new commitment (“Staple”) to a new fund. The third method, which has gained significant momentum over the past few years, is often referred to as an “asset sale or restructuring”, where the assets of a fund are sold into a new special purpose vehicle managed by the incumbent GP. These vehicles typically have a longer term and a revised set of GP economics.

The original investors have the option to sell to a new investor or re-invest (“roll-over”) alongside the GP in this new vehicle, generally on similar economic terms. Typically, asset sales generate the highest price for the selling LPs, given the strong alignment between the GP and the new investor and the opportunity for upside in value due to the increased term of the vehicle.

And we are seeing more of these types of deal…

Yes, there has been a huge acceleration in deal flow. GPs have realised they can strategically tap the secondary market to create more value for their LPs by holding and developing certain assets in longer-duration investment vehicles. In certain cases additional ‘follow-on’ capital will be required that is not available in the original fund. The GP has created ‘optionality’ for their LPs by allowing them to sell or “roll-over” into a longer-dated vehicle.

Most LPs are familiar with these transactions and appreciate the choice they provide. Also, LPs will understand an active GP-supported process tends to generate a higher price to the selling LP than a regular “LP-to-LP” because of the enhanced alignment between the GP and the secondary investor. This additional alignment, time and (often) additional capital to support the portfolio is positive in terms of the price to the selling LP.

GP-leds have only really taken off in the last couple of years. Why were they somewhat slow to catch on?

GPs have realised they can strategically access the secondary market to manage their assets and fund performance. This can involve accelerating liquidity to LPs – either during or at the end of the fund life – by selling a ‘pro-rata strip’ of part or all of their assets, while retaining control over the investments and exposure to the ‘upside’. It can also involve creating new longer-term vehicles to maximize the value for assets that require further time to mature than their current fund term allows. And finally, GPs can manage their performance – mid-fund life – instead of prematurely selling assets to meet fundraising timetables.

Some GP-led transactions have failed over the past year? Why does this tend to happen?

There needs to be a strong commercial rationale for the transaction that creates a ‘win-win’ for the existing LPs, the new secondary investor and the GP. Also, early and regular communication with their LP investors – usually via the limited partners advisory committee (LPAC) – is a key factor in determining success. Finally, it is important to provide existing investors with optionality – the ability to sell or roll-over (“status-quo option”) into a transaction or, indeed, reject a transaction altogether if LPs do not believe it is in their interests.

What are some of the pitfalls to avoid if you want to make sure your asset sale transaction is successful?

The key pitfalls include not having a clear business rationale for the transaction or poor communication with the LP base – GPs should be transparent with their investors. Also, developing confidence that the pricing will be attractive to selling LPs is important. Finally, carefully managing conflicts to ensure a transparent and competitive process is a key success factor.

Does the growth of GP-led processes tell us anything about the limitations of the typical private equity structure?

Most private funds are 10-year vehicles with the potential for two additional years. However, the average fund life is more than 14 years. Sourcing, developing and selling all the assets in a fund within a 10-year period can be challenging. There will be economic downturns during any 10-year period, which will delay the development of the portfolio companies. Consequently, it is not surprising that a subset of assets may require additional time to fully realize their potential.

The quality of funds carrying out GP-led processes seems to be increasing.

I think the big change that’s taken place over the last two years is that GPs are viewing the secondary market as a strategic source of capital. Right now there is over $100 billion of buying power in the secondary market. Given this, it is not surprising GPs are trying to understand how this capital can help develop their businesses.

For example, a GP maybe halfway through their fund life, but believe it’s a poor time to start selling their portfolio companies. However, they may feel it may be prudent to ‘take some chips off the table’ and generate some liquidity for their LPs. Therefore, some GPs will sell a strip of their portfolios in a secondary transaction to generate liquidity for their LPs while maintaining most of the investment upside.

It can also be useful to reduce investment concentration. If a GP believes, that a portfolio is over-exposed to a particular region or sector, the GP could sell a strip of that exposure to re-size their exposure. In this way the GP can actively manage their portfolio while returning capital to their LPs.

How big can the market for GP-led processes get?

The sky is the limit. We should not be surprised if the GP-led market overtakes the traditional LP stakes market.

Are we seeing such deals in infra and real estate too?

We think the idea of using the secondary market strategically to actively manage portfolios is certainly not limited to private equity. Real estate, infrastructure, venture capital and debt funds – we’ve advised funds in all these sectors who share the same challenges and opportunities.

This article is sponsored by Evercore. It appeared in the September issue of Private Equity International magazine.