Secondaries powerhouse Ardian has had a busy year. In the first half alone, the firm sold two portfolios totalling nearly $2 billion, completed the purchase of the largest stapled transaction ever – the $2.5 billion deal with Abu Dhabi’s Mubadala Capital – and was busy raising its latest secondaries infrastructure vehicle, ASF VII Infrastructure fund, targeting $1.5 billion.

Ardian isn’t the only player taking a broader view of the secondaries market. Take Landmark Partners. In April, the private equity and real estate secondaries firm provided preferred equity from its latest private equity vehicle to finance the purchase of a minority stakeholder in Clearlake Capital’s management company. It also bought €650 million-worth of stakes in a 2010-vintage European mezzanine fund managed by ICG. 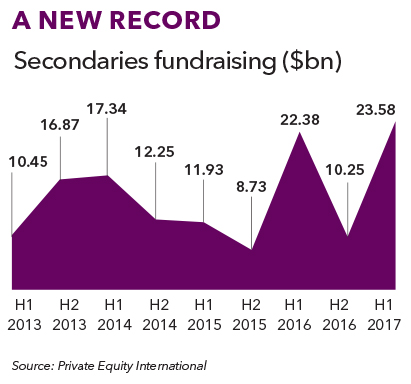 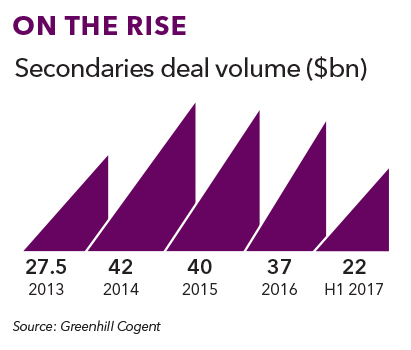 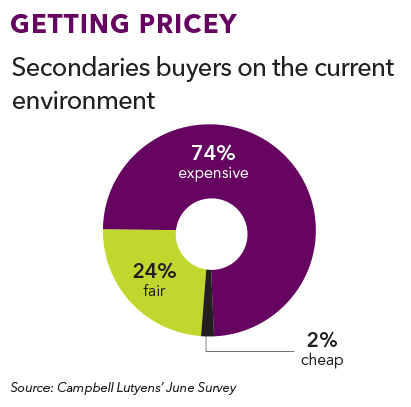 This is testament to how diverse the secondaries market has become. Increasingly, it’s not only traditional limited partners using the market to manage their portfolios. Secondaries buyers, funds of funds and general partners – and not just the struggling ones – are taking advantage of secondaries transactions to manage their funds.

This diversification comes as the market is reaching new fundraising records. In the first half of the year, at least $23.6 billion was raised by funds dedicated to the strategy, according to PEI data, slightly above previous high of $22.4 billion in H12016.

The three largest funds that closed in the first half of 2017 were Blackstone’s Strategic Partners Fund VII on $7.5 billion, AlpInvest Partners’ Secondaries Program VI on $6.5 billion, and Neuberger Berman’s NB Secondary Opportunities Fund IV on $2.5 billion, according to PEI data. Goldman Sachs is also nearing a final close on more than $7 billion for its Goldman Sachs Asset Management’s Vintage VII.

Some in the market fear there might be too much money flooding into secondaries, which could create a slowdown in fundraising as returns dwindle.

“It’s going to put pressure on returns,” says Sunaina Sinha, founder and managing partner of advisory firm and placement agent Cebile Capital. “If returns fall it will be a concern for future commitments.”

But according to Sabina Sammartino, partner and head of the secondaries advisory team at Mercury Capital Advisors, the record-high fundraising continues to support a robust price environment and conditions remain favourable to sellers.

Average pricing for deals closed in the 12 months to June was around 94 percent of net asset value, according to a report by advisory firm and placement agent Campbell Lutyens.

Pricing is also being maintained by rising net asset values. It does, however, vary greatly depending on the quality of the GPs and the performance of the funds trading. Some of the best change hands at a premium.

“Given the strong level of competition in straightforward LP portfolio transactions, secondaries investors have to be more innovative and are increasingly looking at new types of transaction, new sectors, and new ways of delivering target returns to their investors,” Sammartino says. “We’re seeing a broadening in the types of investments, which is a positive development.”

Deal volume is also growing after a slight dip in 2016, with $22 billion-worth of transactions closed in the first half of the year, according to data from Greenhill Cogent. Market participants are anticipating a record year for deal activity, particularly fuelled by US transactions.

“Global secondaries volume was up meaningfully in the first half of 2017 relative to the first half of last year, with an increase in the number of $1 billion-plus portfolios brought to market,” says Andy Nick, a managing director with Greenhill.“Given that the second half of each calendar year has historically been busier than the first, we anticipate that secondaries volume for the full year could exceed $40 billion.”

Typical sellers have included public pension plans and university endowments, which are continuing to actively manage their portfolios, while primary funds of funds, separate account managers and certain secondaries buyers are increasingly selling to liquidate and wind down older funds.

“This year,there has been an increase in the liquidation of mature funds of funds, which are seeking to lock in gains and manage the ultimate liquidty of older vintage funds,” says Verdun Perry, senior managing director and co-head of Blackstone’s Strategic Partners.

Like many in the industry, Perry is relaxed about the amount of dry powder available for secondaries, pointing out the market only has between two and two-and-a-half years of supply available, compared with five to six years in the primary market.

“Secondaries supply and demand characteristics are well within reasonable range,” he says. “We’re still in a relatively comfortable investing environment.”

Indeed, there’s no indication that deal volume will slow down.

“Outside of the increasingly diverse investor base that is accessing the secondaries market, the fund of fund managers which raised capital in the 2003-07 time frame are approaching their final extensions. The growing desire for liquidity from underlying limited partners coupled with pending term expirations should drive additional secondaries buying opportunities from these funds of funds over the next several years,” Perry says.

The rise comes against a background of continued high distributions to LPs, which are struggling to find opportunities to reinvest their cash. If distributions fall, some LPs may be more in need of cash and increase their use of the secondaries market to sell non-core fund commitments.

Additionally, the bulk of the activity continues to focus on pre-crisis vintages – the average vintage of funds sold is 2007. Although the market will see fewer pre-crisis vintages trading, funds from 2011-13, which were busy fundraising years, will sustain healthy dealflow for the next few years.

Overall, secondaries market participants are confident that 2017 will be another strong year. At this point, only a public market correction could derail that, and even that isn’t dampening spirits.

“If you have a big correction in the equity market, I think the volume will slow down for six to nine months at least,” says a secondaries buyer. “But a big dislocation would be a challenge and an opportunity.”