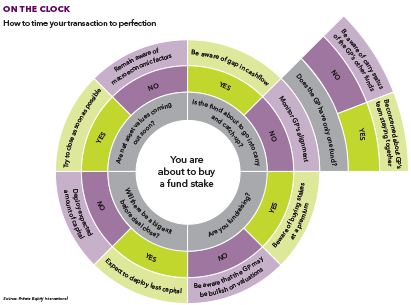 In secondaries, timing can mean the difference between a successful deal and a failed one. Here are four elements participants in a secondaries transaction should be aware of.

CARRY CONCERNS
Buyers need to take account of the impact of carried interest on a fund they are buying into, and its timing on cashflows on the underlying portfolio. If a fund is about to go into carry and catch-up, that can mean a gap in the cashflow for the buyer as the GP gets caught up. “You’d have to be very aware of that and think about the timing of the cashflows,” says David Atterbury, managing director at HarbourVest Partners. “People can get it wrong if they don’t model right down to that level.”

Whether a fund will ultimately hit carry is also a concern, and buyers should be aware of the GP’s alignment, their motivation and ability to realise assets in a fund. This is more pronounced when looking at a manager that only has one fund, as a buyer should be concerned about that team staying together, Atterbury adds.

VALUATION DATES
Timing a deal between net asset value reporting dates and closing can be critical. It is in everyone’s interests to secure a deal before the next set of net asset values comes out and potentially changes the dynamics, says Mark McDonald, global head of secondaries advisory at Credit Suisse’s private fund group. Better reporting has reduced the risk of surprises for LPs, but they can still happen. Waiting too long to close a deal can result in information – such as expectations of an upcoming IPO or a change in a portfolio company’s revenue – that changes the seller’s or buyer’s perspective on pricing.

For buyers, closing a deal in as short a time as possible can sometimes be the key. This is especially true for secondaries firms that pride themselves on having high visibility into the funds they focus on.

“They tend to have an early warning if there’s a huge uptick in the NAV,” says Gabriel Boghossian, partner at law firm Stephenson Harwood. If buyers are covering a GP and its portfolio companies, and they know the fund’s NAV will go up, they will often push for an imminent close, he says.

On the flip side, it’s also in the seller’s interest to lock in a price because what can go up can go down.

“You definitely get sellers who are so pleased with the price they’ve received, they’re concerned that when buyers see the next NAV, they’re not going to want it anymore,” Boghossian says.

FUNDRAISING CYCLES
Secondaries buyers who are on the fundraising trail may not want to show prospective LPs their unrealised losses on stakes they have recently bought at a premium. From a near-term accounting perspective, buying at a discount incurs an immediate unrealised gain on the investment because buyers can mark the portfolio at the NAV given by the GP.

“For buyers in the middle of fundraising, there may be a particularly heightened level of sensitivity for those buyers to pay a premium to NAV for a transaction,” says Phil Tsai, global secondary advisory head at UBS. “Buyers don’t necessarily want to go to a potential investor meeting soon thereafter and explain their rationale for the premium paid, as well as have their return profile hampered by an immediate unrealised loss upon closing of a premium-priced deal.”

If the GP seller of a fund stake is fundraising itself, it tends to be more bullish on the future of its assets to woo LPs.

“It’s natural that fund managers take a more positive stance when they’re busy marketing and looking at things in a more ‘glass half-full’ way,” Atterbury says. “Buying a fund when somebody’s fundraising, you have to be aware of that and make sure you’re considering things with a long-term perspective.”

DISTRIBUTIONS
When a fund is in harvesting mode, a GP selling an asset before a deal closes can have implications for both buyers and sellers. There is always a dollar-for-dollar adjustment to the purchase price to account for this, so an exit from the fund means the buyer will not be deploying the same amount of capital it originally agreed to. In an environment where buyers need to put money to work, this can be frustrating, Boghossian says.

It can impact sellers too — if the crown jewel of a fund is sold pre-close, a smaller or non-commercial seller may think it is not worth their while to incur intermediary and legal costs as well as waste management’s time, as the deal may have dropped below a critical size.

“A secondaries deal is still not just pressing a button, there’s a sale and purchase agreement, a negotiation, lawyers and potential press,” Boghossian says.