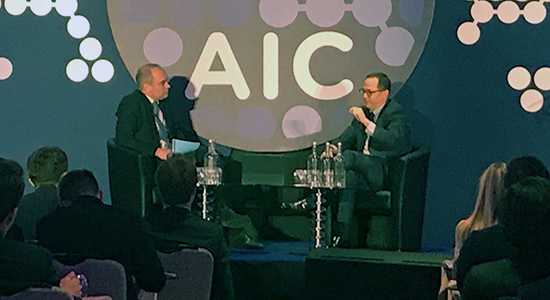 Not everyone is laying awake at night worrying about private equity’s image. For Jonathan Lavine (pictured right), co-managing partner of Bain Capital and CIO of Bain Capital Credit, PE’s licence to operate isn’t at risk. Speaking onstage at the London School of Economics annual alternatives conference this morning, Lavine however noted that the industry needs to be more transparent about “the good and the bad”, to engage more with policymakers and, “not hide, but tell the story”. “We have to be willing to recognise that there’s not going be a 100 percent hit rate … some of the bad stuff exists because when you do 100 deals only 90 or 85 of them are going to be successful,” Lavine said. “But doing a better job of managing that other 15 percent is important.”

Last night, Benoit Durteste, CIO of Intermediate Capital Group, told us on the sidelines of the conference that there is no PE image problem. Certainly not in Europe, anyway, where the days of PE firms being branded as “locusts” by German politicians have passed. European PE he noted, is different from the US in terms of its size and visibility. “The US is a lot more visible. You have a whole bunch of billionaires in the US; they don’t exist in Europe. The industry doesn’t generate that in Europe, so it’s less visible.”

Three articles to furrow your brows

On the topic of ill feeling towards the private equity industry, here are a few recent examples:

LPs really are using your data, they swear. The grumble of many a GP’s finance chief is that the boatload of data and DDQs that they supply to investors does not actually get looked at. At our CFOs and COOs Forum in New York, a panel of LPs of different hues talked through what they do with all that data (they do use it, promise!) as well as a few other bugbears, such as stapled fundraisings, of which they are not fans.

One ice cream and 40 spoons, please. In his story about the €2 billion restructuring of PAI Europe V, focused on one of the world’s largest ice cream makers Froneri, Rod James asks whether the secondaries market is too small to digest all the high quality but highly concentrated single-asset deals out there. After all, the deal took more than 40 investors to digest (pun intended). Has the time come for a concentrated secondaries fund? Toby Mitchenall takes a look on Secondaries Investor.

For more information on Cathay Life, as well as more than 5,900 other institutions, check out the PEI database.

“As an individual employee you do one or two deals in a given year and sometimes you might not do a deal at all. That is the reality.”

Sören Haefcke, vice-president at Bain Capital, tells delegates at a conference organised by students at the London School of Economics about the frustrations of working in private equity.