“I do believe there’s going to be constructive engagement, and perhaps more of a multilateral approach where Europe and other allies are engaged in a discussion. I think it’s important that the relationship is not one of adversaries, but one of great competition.”

During a January presentation to CalSTRS, Carlyle CEO Kewsong Lee trumpeted the ‘sheer scale and the potential‘ of China’s booming economy for investors (registration or subscription required). 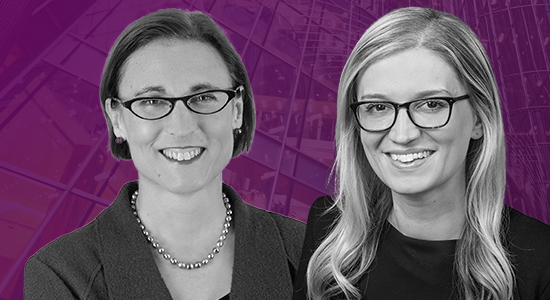 Carlyle Group has arranged what it says is the world’s first ESG-linked PE credit facility tied entirely to social KPIs. The $4.1 billion facility’s pricing is linked to the firm’s self-imposed goal of having 30 percent diverse directors on the boards of portfolio companies within two years of ownership, Carlyle’s chief diversity, equity and inclusion officer Kara Helander (above, left) and global head of impact Megan Starr tell sister title Private Funds CFO (registration or subscription required). Here are some key takeaways:

While ESG-linked credit lines have also found fans in KKR, EQT and Eurazeo, to name a few, such facilities may not suit every manager, as we explored in our Fund Finance Special last week.

The California State Teachers’ Retirement System is putting its money where its mouth is when it comes to climate change. Investment staff at the $283 billion pension are proposing up to $150 million of co-investments focused on low-carbon solutions (eg, energy, water and waste management, food security) per year, per sister title Buyouts (registration or subscription required). CalSTRS has faced criticism in the past for owning fossil fuel assets, a decision it defended on the basis that divestment does not bring about change. As LPs increasingly focus on GPs’ efforts when it comes to the environment, we may see more institutions like CalSTRS taking matters into their own hands.

Vista Equity Partners founder Robert Smith is in talks over reducing Dyal Capital’s stake in the firm, according to Bloomberg (paywall). Smith is reportedly seeking a partial sale of Dyal’s position, which could be to one or more of its existing LPs or back to Vista itself. It comes during a rocky patch for the two firms, with Smith admitting in October to wilfully and knowingly participating in an illegal scheme to evade taxes, and Dyal facing pushback over its proposed merger with private credit firm Owl Rock. It’s unclear whether either of the two events have played any role in Vista’s decision to sell.

Investcorp plans to triple its roughly $500 million of Indian AUM over the medium-term, Harsh Shethia, its new country head, tells PEI. Here are three ways the firm will do so:

India’s PE market has been extremely active over the past 12 months as the pandemic spurs business owners to be more receptive of new capital.

Apollo Global Management has named former SEC chairman Jay Clayton as lead independent director of its board, per a statement. The move forms part of a series of corporate governance enhancements following an investigation into founder Leon Black’s ties to Jeffrey Epstein. Clayton’s hire is noteworthy: his three-year spell at the SEC was marked by a desire to promote retail participation in private markets. As Apollo co-founder Marc Rowan says in the statement: “[Clayton’s] strong command of… the needs of both retail and institutional investors, and the alternative investment industry will be a tremendous asset to the firm.”

Australian superannuation funds will be forced to disclose the value of their unlisted investments under a bill tabled in federal parliament last week. Superfunds were previously able to keep up to 5 percent of their investment options exempt from disclosure requirements on the basis that they’re commercially sensitive. The move is part of a package of measures known as Your Future, Your Super, which has drawn criticism for its inclusion of a performance comparison tool deemed unsuitable for private markets. Supers tend to have reasonably small (think: single-digit) allocations to PE – a dynamic that now faces even stronger headwinds.