“This resolution says public pension funds should not be using investment managers as travel agents.” 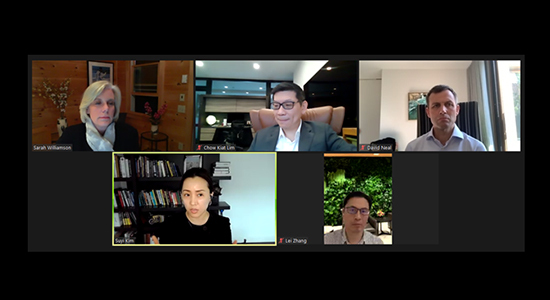 Canadian covid tips
With more than C$44 billion ($33.3 billion; €28 billion) of direct PE investments on its books and at its subsidiaries, Canada Pension Plan Investment Board is an investor that understands how businesses work. Speaking on a digital panel hosted by investment non-profit FCLT Global on Tuesday, CPPIB’s head of Asia-Pacific, Suyi Kim (pictured, bottom left), shared three tips for portfolio companies navigating the pandemic:

Kim was joined on the webcast by GIC’s Chow Kiat Lim, IFM Investors’ David Neal and Lei Zhang, the founder and CEO of Hillhouse Capital Group.

Nordic Capital surpassed its €5 billion target on the first close of its 10th flagship vehicle after less than five months in market (full story here). This will be the fund’s first since it received investment from Ottawa Avenue Private Capital, an investment firm linked to the DeVos family office. Nordic launched the vehicle at the beginning of global lockdown in March and has conducted a fully virtual fundraise. It has a hard-cap of €5.75 billion.

More than 80 firms in the investment industry have signed up to the #100blackinterns programme, which seeks to offer 100 internships to Black students interested in a career in investment management. Private equity backers include CVC Capital Partners, Carlyle Group and Livingbridge. Canada Pension Plan Investment Board. The Church Commissioners for England has also signed up. Internships will be paid and last a minimum of six weeks over the summer of 2021. Programme participants will be placed in investment teams at PE firms, hedge funds, consultancies and pension funds. Find out more about #100blackinterns here.

Despite the threat of thousands of job losses across the retail, hospitality and travel sectors, the UK government should not be looking for ways to bail out PE-backed companies, says the Financial Times in its editorial leader (paywall): “The industry has much to lose in the court of public opinion if it is seen to shirk its responsibilities in today’s crisis. Funds must show they are using all of their own resources to keep their businesses alive.”

A recent parliamentary report has pushed for South Korea’s National Pension Service to be divided into multiple entities, Korean Investors reports. According to the report, splitting the fund would improve efficiency and encourage a more diverse investment strategy. At 749 trillion won ($627 billion; €527 billion), the NPS is the world’s third largest pension fund, but currently relies heavily on investments in local markets.

Carlyle has asked employees to steer clear of public transport, as it tentatively prepares to reopen its London headquarters in September, reports the Financial Times (paywall). As part of its global policy, the firm has also requested that staff avoid returning to the office for 14 days if they use public transport over the weekend.

For more information on Virginia Retirement System, as well as more than 5,900 other institutions, check out the PEI database.