We’ve just published our latest SI 30 ranking of the biggest secondaries fundraisers and it’s a shocker: market leader Ardian is miles ahead of the competition, having raised more than $47 billion over the last five years. For context, that’s almost as much as the fundraising total of the bottom 19 firms in the ranking combined. The ranking is part of our September issue’s secondaries special. Over the next few weeks we’ll be bringing you extra analysis and insight into one of the private equity market’s fastest evolving strategies.

Public listings for private equity firms have fallen out of fashion. This is no doubt in part because much more private equity capital has become  available to invest in firms themselves. EQT’s confirmation that it intends to raise €500 million through an IPO comes just weeks after another European heavyweight – BC Partners – raised a similar amount through a private transaction with a unit of Blackstone.

So why would EQT – led by chief exec Christian Sinding – pursue a public listing, with all the inefficiencies and risks that PE evangelists normally eschew, rather than a stake sale option? The answer is that this is about more than just money. The firm talks about creating “a more transparent governance structure,” as well as raising its profile with investors around the world: two things a private sale does not necessarily do.

Swedish pension AP Fonden 1 has dismissed its chief executive Johan Magnusson effectively immediately for violating the fund’s rules on the holding and trading of financial instruments. Teresa Isele, the fund’s general counsel, has been appointed acting CEO. The Skr352 billion ($35.6 billion; €32.6 billion) fund has 5 percent of its total assets in private equity and has backed funds managed by Hamilton Lane and Summa Equity.

Tikehau’s Japan plans. Tikehau Capital plans to bring on Japan’s T&D Insurance Group as a new shareholder. As part of the alliance, the Paris-based asset manager will partner with T&D Asset Management, an investment advisory and subsidiary of the group, to extend its client reach to Japanese pension investors. The tie-up will initially focus on Tikehau’s private debt products and could grow to include additional asset classes over time. It follows Tikehau’s expansion into Japan with a Tokyo office this year.

The PE shortfall. LPs wanting more private equity are caught in a strange place. They increase their PE allocations but find themselves under-allocated to the asset class. With the success of PE leading to higher distributions, LPs need to put that money back to work in a competitive environment. So says data software house eVestment. Who is facing more shortfalls? The smaller US pension plans, either because they’ve come late to the party or because their size doesn’t help them get commitments to preferred GPs.

Grand commitments. Arizona Public Safety Personnel Retirement System has committed $100 million to Stone Point Capital’s Trident VIII fund and $50 million to Baring Asia Private Equity Fund VII, as the table below shows. The $10.3 billion US pension has a 14 percent target allocation. For more information on Arizona PSPRS, as well as more than 5,900 other institutions, check out the PEI database. 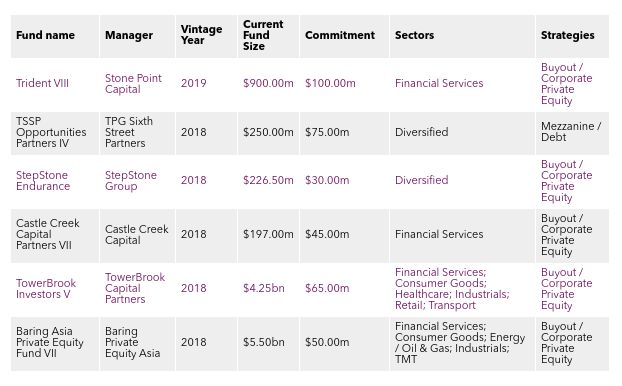 “I’ve seen leading companies quickly seem outdated and unattractive or even whole industries become a stranded asset. Investors can see trends like climate change, sustainability and food technology having that effect on the food giants.”

Jeremy Coller, founder of Coller Capital and the FAIRR Initiative, tells the FT a “megatrend” like non-meat food options could disrupt the entire food industry.