Plant-based milk company Oatly responds on Twitter to customers angry at it taking investment from Blackstone. 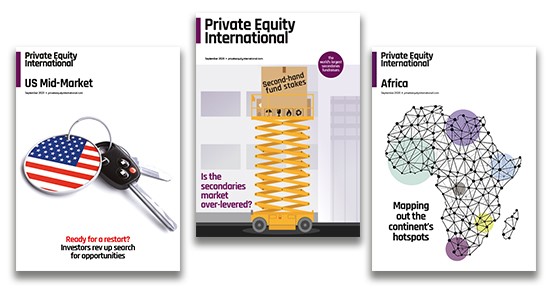 Subscribers to PEI can now download the September edition of the magazine here, as well as two special reports on Africa and the US mid-market. Our main edition contains our annual secondaries special, which, among other things, features our proprietary list of…

Ardian again tops our SI 30 ranking. The French giant leads a pack of firms that have raised $256.84 billion between them over the last five years to deploy into a secondaries market that has evolved from simply acquiring LP stakes to much, much more.

That market is in a state of calm before the storm; there’s as much as $183 billion in dry powder for the strategy, and with this year’s crisis pushing out GPs’ exit horizons, secondaries buyers with capital to deploy are anticipating a dealflow deluge.

Some of that secondaries capital will likely also be used to create spin out firms, like Longshore Capital Partners. Longshore comprises a duo from lower mid-market firm Lasalle Capital, who just spun out with capital from secondaries firm Spring Bridge Partners. Adam Le has the details here.

Scoop: growth buyout firm Luminate Capital Partners is back on the fundraising trail with its third fund, Side Letter has learned. The firm, set up by former Silver Lake managing director Hollie Haynes, is seeking $700 million for its latest offering, 75 percent larger than its predecessor 2018 predecessor. Luminate closed its oversubscribed debut fund in 2017 with more than $265 million of capital commitments. The firm declined to comment on fundraising.

Japanese LPs still have some way to go before fully embracing impact investing, a virtual conference has heard. Speaking in a teaser session for PEI’s inaugural Responsible Investment Forum: Tokyo, Sayaka Takatsuka, senior director at impact manager Shinsei Corporate Investment, highlighted four priorities for domestic investors with an interest in ESG, including the need to establish an internal definition for ESG, deciding how best to measure impact and how to disclose those results publicly. The full video can be accessed here.

Buy-and-build strategies are more than just “window dressing”, finds a study by researchers at Netherlands’ Tinbergen Institute. The study, which analysed 818 platform investments and 1,346 follow-on acquisitions completed from 1997-2016 in seven major European PE markets, found “improvements of sales and profitability of these combined entities and argue[s] that these improvements are consistent with the operating synergy interpretation and not the result of inorganic acquisitive growth”.

Personal finance commentator Merryn Somerset Webb writes in the Financial Times (paywall) about the shift from public to private markets, citing Morgan Stanley’s in-depth study into the topic. Her take: “The best companies everywhere will probably remain in private hands for some time. For the world’s investors, the promise of a debt-fuelled something in private equity is better than the certainty of almost nothing elsewhere.”

Elsewhere in the same publication, columnist Jonathan Ford writes that private equity fees are too high. As one reader comment puts it: “Hard to understand what the point of this article actually is.”

For more information on SEMA, as well as more than 5,900 other institutions, check out the PEI database.