“It would be great if deficiency letters were shared with the limited partners. Right now, the general partners make it very hard to actually see this information. Transparency is a good thing.” 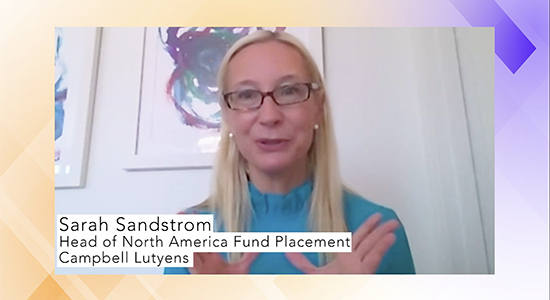 Spin class
Headphones on? Good. In PEI‘s latest video, three spin-out experts – Sarah Sandstrom (pictured) of Campbell Lutyens, Thomas de Waen of Core Equity Holdings and Carlo Pirzio-Biroli of Glendower Capital – share five tips for going it alone. For those of you unwilling to pause Netflix for six minutes, here’s what you need to know to make your spin-out a success:

With spin-outs an even trickier proposition during the pandemic, preparation will be key for those willing to take the plunge. Click here to read our December Deep Dive on starting anew.

CDC’s VC
CDC Group, the UK development finance institution, is gearing up for more VC in the emerging markets. The organisation appointed Nikunj Jinsi, former global head of VC at the International Finance Corporation and Anne Glover, chief executive of Amadeus Capital Partners, to a newly formed VC investment committee earlier this month. PEI caught up with Tony Morgan, CDC’s PE and corporate debt head, to discuss how LPs can approach an already risky asset class in what are perceived to be riskier markets. Main take-away: co-investments in India – a market garnering more attention from overseas buyers during the pandemic – will prove key.

Calling all women in PE!
There are still four days left to tell us who deserves a place in PEI‘s third annual rising stars of PE list. We’ve received a wealth of nominations this year, but we’re still looking for more women entrants. With PE’s diversity efforts facing greater scrutiny than ever before, what better time to recognise the women on track to become future leaders? Let us know here.

Capital injections
CVC Capital Partners has bought into the UK’s vaccine rollout with stakes in System C and Graphnet Health, which together run the IT system used by the NHS to organise vaccinations, per The Financial Times (subscription required). PE firms have rushed to capitalise on healthcare opportunities relating to the pandemic, such as hand-sanitiser producers or cold shipping companies, over the past year. As Denis Ribon, chairman of European healthcare firm ArchiMed, told PEI this week: “Everybody wants to get into healthcare.” With many countries still formulating their vaccine responses, expect to see more of these deals.

Indonesia’s SWF hires
Indonesia’s new sovereign wealth fund has tapped former KKR director Ridha Wirakusumah as its chief executive, per Reuters. Stefanus Ade Hadiwidjaja, a former managing director of South-East Asia PE firm Creador, was named chief investment officer. Estimates for the Indonesia Investment Authority range from $20 billion to $100 billion, most of which has been earmarked for infrastructure investments. Though it’s unclear whether PE will be considered in future, the pedigree of its new senior officials suggests it could be on the cards.

US vs them
US investors are still lagging on ESG. That’s according to a recent survey from JPMorgan Asset Management, which found that just 11 percent cite ESG factors as among their top three considerations in decision-making, versus 46 percent in EMEA, as sister title Infrastructure Investor details (registration or subscription required). LP attitudes to ESG are progressing fast, with 38 percent of respondents in PEI’s LP Perspectives 2021 Study considering the issue a major part of due diligence, up from 31 percent last year. Our inaugural Innovators in ESG and Impact Investing list this month explores the ways GPs are responding.

Today’s letter was prepared by Alex Lynn and Carmela Mendoza.