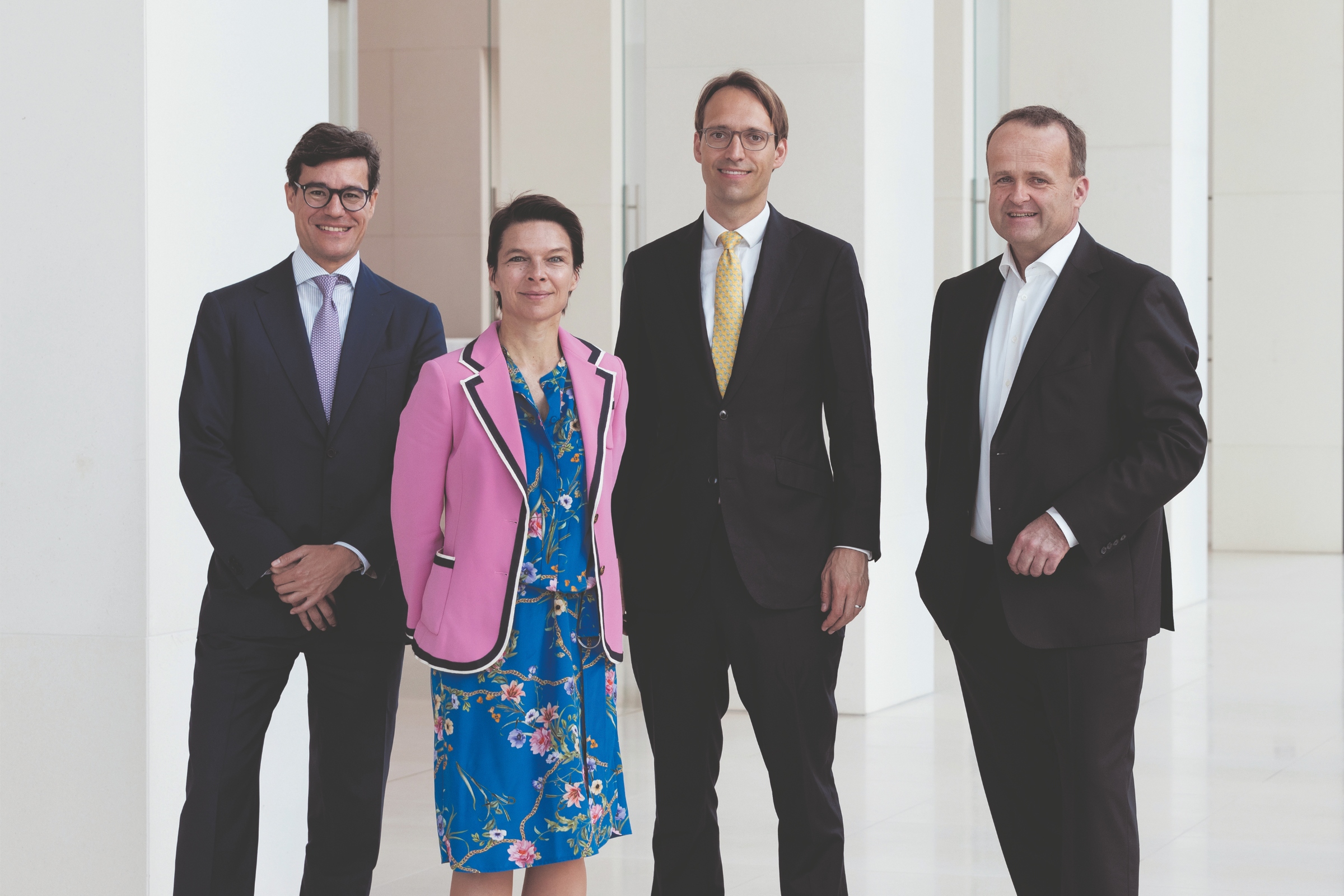 In German private equity, investors and managers are also facing new opportunities and challenges brought about by tighter regulation, high valuations and a new breed of entrepreneurs, four market veterans note in our roundtable discussion.

While fundraising and deal figures remain stable, the over-riding sentiment in the German market – and across Europe – is still one of caution and nervousness, participants agree.

Andreas Simon joined Capvis in 2007 and has more than a decade of private equity experience. Simon was previously a director for mergers and acquisitions at Siemens in Munich and a financial analyst in the investment banking division of Credit Suisse in London.

Patricia Volhard is a partner in Debevoise’s Frankfurt and London offices, and is a member of the firm’s private equity and funds/investment management groups. She previously served as chairwoman of Invest Europe’s tax, legal & regulatory committee, and is the incumbent chairwoman of its financial services/regulatory working group. Volhard also sits on the legal committee of BVK, the German private equity association.

Philipp Patschkowski is a managing director at Neuberger Berman, where he leads primary and secondary fund investments and direct co-investments. He was previously a principal at Coller Capital, where he was responsible for originating and executing secondary and strategic primary fund investments and co-investments. Earlier in his career, he worked in investment banking at UBS and at Sal Oppenheim. Patschkowski is a member of the LP Council of Invest Europe, the European private equity association.

Torsten Grede
Spokesman of the board of management, Deutsche Beteiligungs AG

Torsten Grede began his career at Deutsche Beteiligungs AG in 1990 and now has nearly three decades of experience in private equity, specialising in Germany’s mid-market. He was appointed to managing director in 1995 and became a member of the firm’s board of management in 2001. In 2013, Grede was appointed spokesman of the board of management, working on establishing and leading DBAG’s country-specific operations.

Philipp Patschkowski, a managing director at Neuberger Berman in London, says investors are taking a cautious look at underlying investment themes and focusing on resilience and growth, even more so than a year ago. “GPs are proactively trying to conclude another fundraising on this side of the cycle. We continue to see them fundraising earlier and holding dry closes before they start investing,” he adds.

Limited partners fear a looming recession and have become more sensitive when they assess business models and their resilience to an economic downturn, says Andreas Simon, a partner at mid-market pan-European firm Capvis.

High levels of dry powder combined with low interest rates have also led to a rise in transaction multiples – another major concern for LPs and general partners alike. An influx of names from the US entering the German market has increased competition and driven up prices.

High valuations mean managers have started to assume a multiple contraction on exit, according to Patschkowski. To counteract this, GPs must try to increase the EBITDA of their portfolio companies through operational improvements by growing the top line and making the businesses more efficient as they grow, he says.

In summary, GPs have to work much harder to create value, compared with 10, 20 years ago, and continuously evolve doing so, Patschkowski adds.

A tougher environment for returns means investors are more closely scrutinising and monitoring their own portfolios.

“LPs are looking at compliance issues more closely. They are asking more questions on operations, conflicts of interest policies, due diligence processes and compliance with ESG standards and requests for excuse provisions in certain cases,” says Patricia Volhard, a partner at international law firm Debevoise & Plimpton.

“They are also investigating more on costs and fees and expenses and ask for more detailed disclosure.” Volhard adds that LPs in recent years have shown strong interest in debt funds – from those with long-term strategies and a very PE-like approach to debt funds supporting leverage buyouts, as well as those providing subscription facilities.

“Brexit is only one example of the growing nationalism across Europe, which is also a problem for PE because the industry is very much relying on being able to act on a cross-border basis – from the way you set up your structures with a broad, often very global, investor base, to the investment side where most funds invest in several jurisdictions,” Volhard says.

“In the case of a hard Brexit, even though we say it doesn’t make a huge impact immediately, it will be a problem over time to the extent no arrangement can be found.”

Comparing the risk-return profile of opportunities in areas across the region, the UK has become less attractive since the Brexit referendum, Patschkowski says. “On the portfolio company level what we have seen and anecdotally heard is not just how the Brexit uncertainty affects capital expense decisions, but also that a lot of supply chains have been remodelled to reduce a potential Brexit risk by including more suppliers from continental Europe.”

The private equity industry has become much more efficient in Germany, says Torsten Grede, spokesman of the board of management of Deutsche Beteiligungs, a longstanding domestic private equity firm.

“You go into the marketplace and see restructuring situations as well as family-owned companies which need some support, looking to take investors on board via minority investments,” Grede says.

“There are all sorts of situations and there are plenty of choices to get financing for these situations. That has definitely changed compared with 10 [or] 15 years ago.”

Grede adds there is no shortage of capital for the DACH region, and DBAG has seen increased appetite from overseas LPs for country-specific funds. Some investors from the US might not have chosen to commit to German funds 10 years ago; at the time, country funds were often not sizeable enough to accommodate larger investors with their huge allocation needs, he says.

The DACH region was the third most attractive market in Europe in 2018 when it came to deal activity, accounting for 18 percent of transactions, behind France and Benelux (30 percent) and the UK and Ireland (22 percent), according to industry body Invest Europe.

There’s still a lot of untapped potential in the German market: private equity-backed investments in the country last year as a proportion of gross domestic product was just less than 1 percent, according to data from Invest Europe.

Succession deals, an “everlasting story” in Germany, remain attractive, says Simon. “Culturally, German families would like to preserve their wealth and keep their money invested in a company [rather] than being invested in the stock market.”

The market is now filled with young companies founded by serial entrepreneurs, who won’t necessarily sell a majority but want to co-develop their business with a private equity firm and list it at a later stage, Simon adds.

Family-owned businesses have consistently accounted for about 10 percent of the German buyout market, which corresponds to 30-50 transactions per year with enterprise values ranging between €50 million and €250 million, Grede says. That proportion has increased to 20 percent in the last two years.

Much of that increase is accounted for by companies founded 30 years ago with younger business models, such as software and IT services.

“It seems to me that the owners of these first-gen companies have a different view – they don’t have a dynastic view. They are 55 years old, thinking about their personal life. They want to enjoy life and don’t want to stay in the office until they are 75,” says Grede.

“That explains why the proportion of family-owned businesses in private equity is increasing.”

Simon, who is also co-head of industry and technology at Capvis, says what’s interesting is the technology available with limited cost that has the ability to reshape industries.

“You can consider it a threat for established businesses but also as an opportunity because new business models are emerging, founded by a relatively young generation who have a different approach,” he says.

Close to 80 percent of PE-backed companies in 2018 had an annual turnover of less than €10 million, according to BVK data, while those at the large end of the market – companies with revenues of between €100 million and €500 million a year – made up only 5 percent of the total share and are often acquired by large pan-European firms.

Grede points out, however, that tapping opportunities in Mittelstand or small and medium enterprises isn’t new and can be quite challenging.

“It’s all about cultural differences. For a German entrepreneur who has taken over a business founded by his father or great-grandfather, his company is part of his life and the family. That explains why a large number of Mittelstand companies do not come to market.”

The surge of nationalist populism has had an impact on German private equity’s cross-border investment activity in recent years.

In 2017, the remit of the German Foreign Trade and Payments Ordinance, known as AVW, was expanded to focus on “critical infrastructures” that may pose a threat to national security if acquired by foreign interests. Sectors covered include health, telecoms and finance.

In addition, an amendment to the German Foreign Trade Regulation, which came into force on 29 December 2018, expands the oversight of the German Ministry for Economic Affairs and Energy. The new rule lowers the foreign investment threshold screening from 25 percent to 10 percent for some transactions and even blocks purchases of stakes in German companies by non-Europeans.

As a result of such measures and other protectionist policies, Chinese direct investment in Europe has fallen to €17.3 billion in 2018 from €37.2 billion in 2016, according to the Mercator Institute for China Studies. Germany’s advanced manufacturing capabilities were the biggest attraction for Chinese investors with automotive and industrial equipment accounting for more than 6 percent of total Chinese investment since 2000.

Andreas Simon says: “When you speak to M&A advisors, they are quite cautious on engaging and involving Chinese investors on the buy-side because there has been a change in the regulatory framework where Berlin can have a say.”

A lack of clear, predictable rules around Chinese investment into Germany makes it tough to engage with Chinese bidders.

“When it comes to transaction certainty – which plays a role when it comes to exits – GPs have to think twice before engaging in a deal with a Chinese party because it will be subject to regulation. That’s the new environment we are facing,” Simon adds.

In addition, helping portfolio companies set up subsidiaries in China means also thinking hard about whether that could derail a future sale to a US buyer, given the ongoing US-China trade tensions.