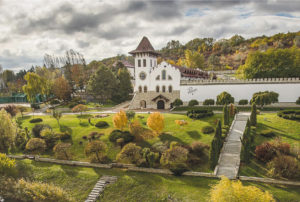 Founded in 1827, Purcari Wineries operates three wineries in Moldova and another in Romania. When Horizon Capital backed the Moldovan company in 2010 through its 2008 vintage fund, Emerging Europe Growth Fund II, it believed it was looking at a typical growth deal. At the time of the investment, Horizon Capital identified an opportunity to expand the company’s customer base and draw on its relationships and expertise in the sector to grow sales quickly while implementing operational improvements.

However, in 2013, Russia placed an embargo on Moldovan wine imports, shutting down Purcari’s largest market overnight and depleting it of over half its accounts receivables. A year later geopolitical turbulence and economic shocks in CIS countries such as Ukraine, Belarus and Kazakhstan – also significant export markets – caused currency devaluations which compounded the challenges facing Purcari. The company’s EBITDA dropped to nil, while net debt approached $20 million, straining its liquidity.

As a result, what Horizon had envisioned as a growth deal became a distressed, turnaround deal, and the fund manager had to reshape its value creation plan significantly. To mitigate the loss of the Russian market following the 2013 embargo, it developed a new commercial strategy targeting CEE markets, primarily Romania and Poland. To support this, Horizon’s investment team took a hands-on approach to training management in sales and marketing best practices, as well as streamlining its product portfolio and relaunching Purcari’s four main wine brands. Horizon developed a “marketing on a shoestring” strategy, emphasising the use of new digital channels and social media.

The company has also made an ongoing investment into the latest wine technology and has been digitising processes to enhance its operations.

In 2018, with the support of Horizon’s investment team, Purcari Wineries became the first Moldovan company to go public on the Bucharest Stock Exchange. The IPO raised approximately 186 million Romanian leu ($50 million; €40 million). As a result of the listing, Horizon sold a 41 percent stake in Purcari, realising a 3.2x gross cash-on-cash return. It remained an active shareholder with a 23 percent stake, before fully exiting in October 2019. It realised a gross 3.3x cash-on-cash multiple on exit.

Over the fund’s investment period, Purcari Wineries’ workforce grew from 652 to 1,172 employees and EBITDA increased 15-fold. Between 2013 and 2018, the company’s revenues more than doubled. Today, Purcari delivers to more than 40 countries and manages over 1,392 hectares of vineyards.

The judges commended Horizon for the “excellent turnaround of a business with continued growth despite a significantly challenging business environment”.