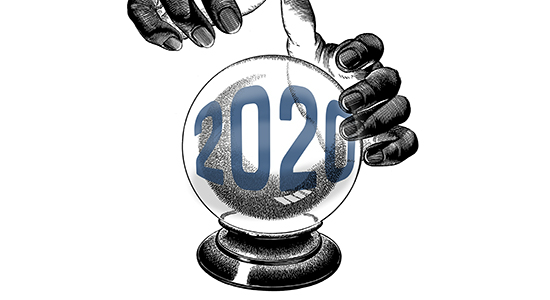 We already brought you our eight things that certainly won’t take place in 2020. What do we think will happen? Here are five trends to watch:

Consumers will make their voices heard. In a year in which a US election will catalyse debate and scrutiny about the role of private markets in society, expect to hear more reaction from portfolio companies’ customers and employees. For an early taster, consider how some customers of trendy fitness company SoulCycle found themselves at odds with the political affiliations of its PE owner’s chairman in August 2019. Recap from the Guardian here.

The standardisation of ESG. Practices for measuring and reporting the environmental, social and governance performance of portfolio companies are still all over the place, concluded this report from sister publication Private Funds CFO. And various third-party ESG scoring systems are – say colleagues on sister title Infrastructure Investor – still nascent and limited. S&P became the first conventional ratings agency to get into ESG evaluation during 2019. Expect more to follow.

All eyes on SoftBank’s second Vision Fund. After a year in which SoftBank chief executive Masayoshi Son was chastened by his experiences in the office rental business, progress in raising the second iteration of its Vision Fund will be the subject of much speculation. The last official guidance the market had was a July 2019 filing, citing an expected target of $108 billion, including a $38 billion commitment from SoftBank Group.

The largest fund raised this year will be for secondaries. Paris-headquartered Ardian targeted $18 billion for its latest secondaries programme, which includes a $6 billion co-investment vehicle. Don’t be surprised if at final close – which we anticipate will be in H1 – the vehicle exceeds $20 billion.

Secondary buyouts will be redefined. Single asset restructurings – in which an asset is moved from an old fund to a continuation vehicle, typically with backing from a secondaries investor – are on the rise. 3i provided a recent example. The primary benefit to the GP is that it can continue to manage and stay exposed to an asset it would otherwise be forced to let go. Expect this niche to grow at the expense of the conventional sponsor-to-sponsor option.

Australia’s bushfires. A devastating humanitarian crisis is unfurling in Australia. At the time of writing, bushfires are reported to have killed at least two dozen people, leaving thousands of homes destroyed and 13 million acres of land burned – and this year’s fire season is far from over. Right now we are reaching out to GPs – most of whom are still vacationing – to get a sense of the impact this type of disaster will have on their due diligence on Australian companies in all sectors. Have some thoughts? Let Alex Lynn know at alex.l@peimedia.com.

People move scoop. Fund law doyen Jonathan Blake (you can read how he pioneered the use of the English limited partnership for private equity and shaped the industry as we know it in this 2014 profile) has started a new chapter at Herbert Smith Freehills.

Good ol’ funds of funds. Even with the double layer of fees, and accounting for funds of funds’ longer path to redemption, they have outperformed secondaries funds in nine of 12 vintages, says a study by Zurich-based consultancy Wellershoff & Partners. One reason for this, according to partner Cyril Demaria, is probably the availability of co-investments, which boost returns while lowering the average cost for funds-of-funds LPs. “Secondaries is an instrument that is mostly for tactical purposes – you get some early liquidity but you leave some performance on the table,” he added.

In case you missed it during December:

Are banks back? Spain’s Banco Santander has launched a €1 billion private equity platform focused on Spanish SMEs. Called Tresmares Capital, the unit will specialise in private equity fund management, direct financing, venture capital and transaction structuring. Banco Santander will commit up to €900 million to Tresmares’s private debt fund and about €70 million to its PE fund, according to a statement.

Dangerous predictions. ILPA for the last few years has compiled annual predictions for the year ahead, and 2020 is no different. However, this year the predictions appear to have gone missing from the organisation’s website. Leaves us wondering what inflammatory prognoses the investor community gave.

Speaking of single asset restructurings: Rod James of sister title Secondaries Investor is looking into a sizeable single asset deal that is currently brewing and which is understood to involve a US West Coast tech asset. Let him know at rod.j@peimedia.com if you have any info.

“We are coming to a point where if you are silent on impact, you will be conspicuous. You will stand out for the wrong reason.”