J Coller spreads the love
It’s no secret that secondaries firms are being snapped up left, right and centre these days, with at least seven such acquisitions last year alone. Coller Capital, the last remaining independent secondaries firm of size, has been understood to be shopping itself to potential buyers, as our colleagues at Secondaries Investor reported in 2021.

While there are no developments on an external acquisition to report as yet – a source close to the firm tells Side Letter that the firm has no plans for a sale – the firm has decided to change the ownership makeup of its management company for the first time in its more than three-decade history. All of Coller’s 29 partners will now share a 25 percent stake in the business, SI reported late last week (registration required).

The development is important for at least two reasons. One: with seven partner departures since March last year (it also promoted six to the partnership, we should note), the firm will have been keen to ensure its top brass have a vested interest in the future of the company. And two: it’s the first time founder and chief investment officer Jeremy Coller has parted with equity in his eponymous firm – an issue that had been somewhat of a gripe among Coller partners, past and present, multiple sources have told Side Letter over the years. With the firm expanding across strategies and geographies (debt secondaries and China), a stable partnership group is a no-brainer.

Apollo’s retail ambitions
Apollo Global Management has made “meaningful progress” in its global wealth buildout so far this year across fundraising, hiring and products launches, chief executive Marc Rowan said during the firm’s first quarter 2022 results last week. The firm set out a five-year plan during its investor day last October, including having a total AUM of roughly $50 billion over the period from its retail channel. Here’s a breakdown of the strategy’s progress so far:

Main’s growth
Netherlands-based Main Capital is in market with its debut growth equity vehicle, less than a year after gathering €1.2 billion for its seventh buyout and foundation vehicles. Main Growth Equity I’s target is €250 million and no hard-cap has been determined yet, a source with knowledge of the fundraise told Side Letter. Fundraising is understood to have kicked off at the mid-market firm’s annual general meeting last month.

Unlike its buyout funds, capital raised for the fund will take minority positions and provide structured equity. Growth fundraising by Europe-based firms reached the highest level ever recorded – €20 billion – last year, marking a 10 percent increase from the year prior, according to Invest Europe’s latest report. Growth investment (see graph below) had a whopping 124 percent year-on-year increase.

European private equity recorded its best year for dealmaking in 2021, with €138 billion invested across 8,895 companies – a 51 percent increase over the prior year, according to Invest Europe’s latest private equity report. Growth investments had the biggest rise, a 124 percent year-on-year increase to €35 billion, with ICT deals receiving the highest level of investment, followed by biotech and healthcare. Buyouts, which accounted for 60 percent of investments, grew 28 percent from 2020 to €79 billion. Mid-market (€15 million-€150 million) and mega-buyout deals (>€300 million) were roughly equal at about €29 billion. Venture increased 70 percent year-on-year by deal value. 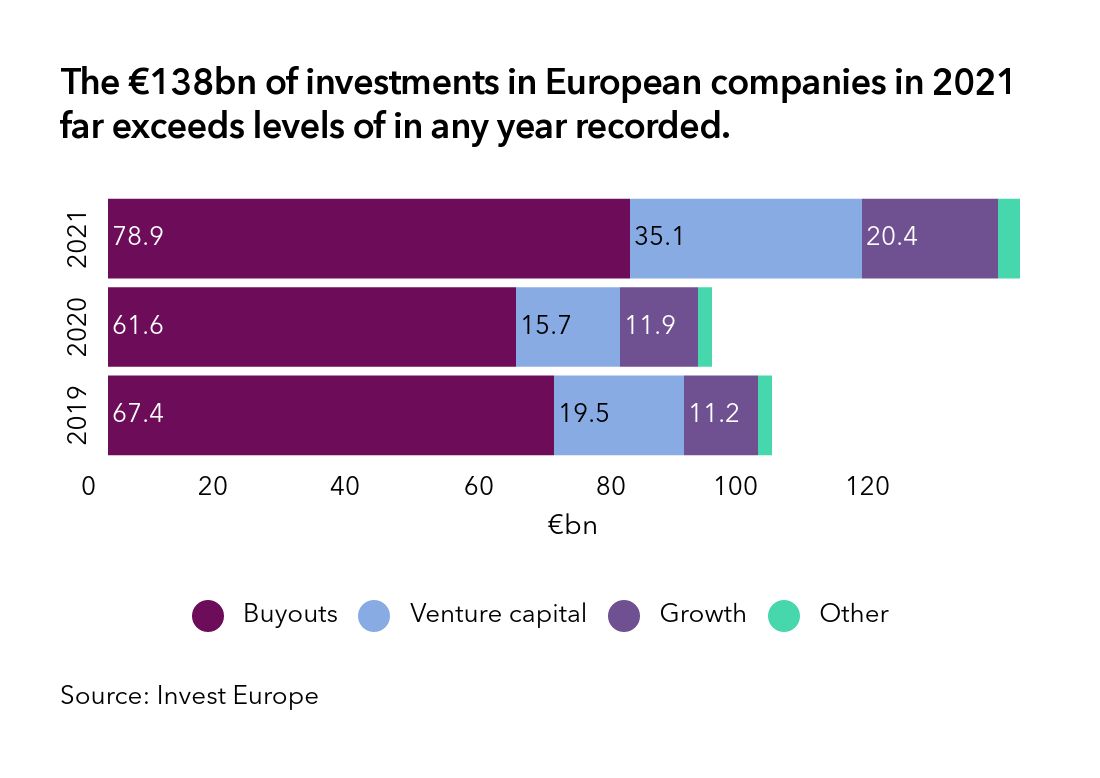 MassPRIM’s long leash
The Massachusetts Pension Reserves Investment Management Board is considering allowing its CIO, Michael Trotsky, to make decisions on certain venture capital commitments without first requiring full board approval, our colleagues at Buyouts report. According to a presentation made before the firm’s investment committee last week, LPs have had difficulty accessing desirable venture capital fund managers due to their smaller fund sizes.

The current frenetic fundraising pace is also a hindrance, MassPRIM’s presentation noted, leading the pension to consider ways of maintaining flexibility and shortening timelines when raising capital. The proposed policy would limit commitments without board approval to $75 million to any single fund and would not extend to VC co-investments.