“Maybe this is a buyers’ market today versus where it was a year or two ago.”

In case you missed it, Australia’s Future Fund sold a giant slice of its private equity portfolio during the most intense period of the pandemic this year. The sovereign wealth fund offloaded around A$6 billion ($4.4 billion; €3.7 billion) of PE in Q2 2020, representing a 3-percentage point drop in exposure to 15.2 percent between March and June, according to its interim results.

Details remain confidential, but we understand the A$161 billion fund had engaged secondaries advisor Greenhill as early as October 2019 and that pricing was decided before the pandemic, as previously reported by sister title Secondaries Investor.

The sale reduced Future Fund’s exposure to international growth and buyout managers. We don’t as yet know which fund stakes were included: Future Fund had relationships with 17 buyout firms as of March this year, according to its website.

We asked acting CIO Sue Brake about it on the fund’s earnings call this morning. She said the move doesn’t reflect a lack of appreciation for the asset class – rather, Future Fund’s exposure had soared in prior months partly as a result of PE’s relative outperformance. “In terms of the rebalancing within the portfolio, it was really a strategic thinking about the overall balance of both buyout and VC,” she said.

Future Fund is no secondaries market novice, having sold around A$12 billion of assets – including this latest tranche – in recent years.

This Dyal goes all the way to nine

“Bloomberg earlier reported Dyal was looking to secure at least $9 billion for Fund V, which suggests the $5 billion is an initial or minimum goal. The firm did something similar with last year’s Fund IV, the person said, starting off with a target of roughly $5 billion, or near the sum raised by Fund III, and ultimately closing at more than $9 billion.”

Check out our interview with Dyal leader Michael Rees back in March on how stake sale proceeds can help firms take advantage of covid-related market dislocation. 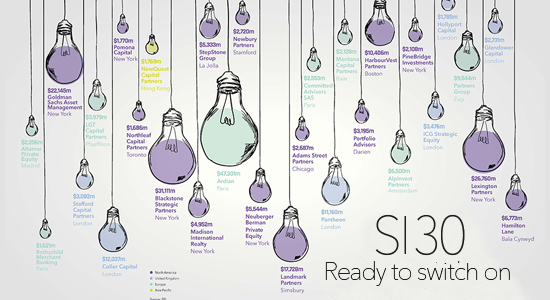 The SI 30 is our exclusive ranking of the largest secondaries firms in the world by capital raised in the past five years. Click on the image or this link to see the infographic in full. Read about this year’s ranking here.

ArchiMed arrives in US

European healthcare specialist ArchiMed is set to open an office in New York – its first overseas outpost – this month. Antoine Faguer, a partner at the firm, will head up the new office, according to a firm spokesman. The firm originally planned to open in the US in 2018, but deal-making got in the way of those plans, the spokesman says. ArchiMed last week gathered €1 billion for its third fund – Europe’s largest healthcare-dedicated vehicle thus far.

Twenty – that’s the recommended number of slides emerging managers should have in their PowerPoint presentations when pitching to potential investors. So says Allen Latta (LinkedIn profile here), a private equity veteran who has outlined top pitch deck tips from an LP’s perspective in this detailed blog post. “This is a presentation, not a book,” advises Latta, who says covers should be clean and simple, legal disclosures should be kept to one slide maximum, and details on track record must be relevant. “If your prior investments aren’t on-strategy, then their value is very limited,” Latta says.

The Institutional Limited Partners Association is giving its US employees the day off on 3 November – US election day – to encourage them to vote, and is hoping its members and the wider private equity community will follow its lead. In an email, ILPA said the move seems “especially critical this year so that people can make plans to vote as safely as possible in light of the global pandemic”, while stressing the industry body is not politically affiliated and is not trying “to encourage support for any party or platform”.

Minnesota State Board of Investment has committed $927 million across six private equity vehicles at its August 2020 investment board meeting. These commitments were made to the institution’s existing managers.

For more information on Minnesota State Board of Investment, as well as more than 5,900 other institutions, check out the PEI database.