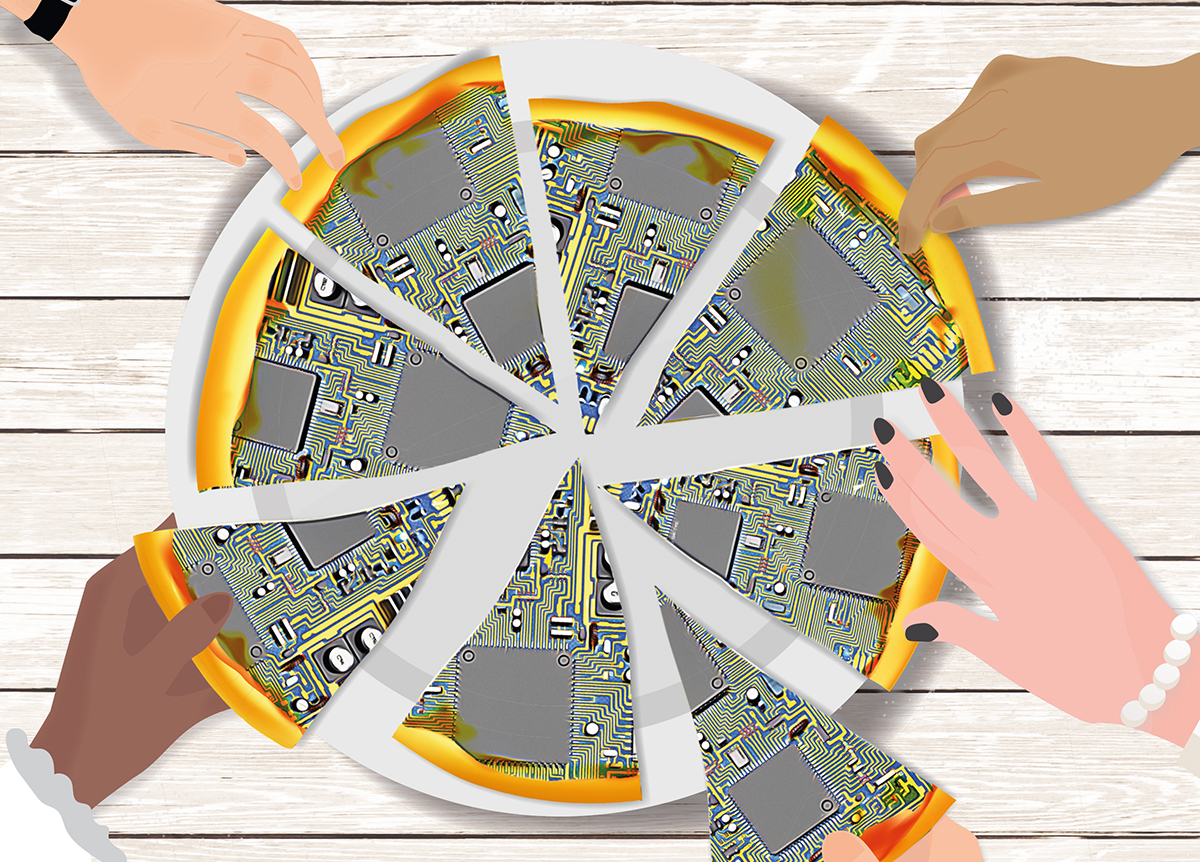 At a time when every company calls itself a tech company and every investor claims to be a tech investor, spotting the tech subsectors with the most potential is no easy call. But while software and digitisation remain top of the list for private equity firms and their LPs, it is tech services businesses that are really capturing the imagination.

Bilge Ogut, partner and head of private equity technology at Partners Group, says: “One thing we have observed over the last few years is how technology and digitisation have increasingly entered the mainstream of corporate strategy, so that suddenly everyone needs a technology strategy. That has spurred our interest in digital engineering services and companies like GlobalLogic, which we just sold to Hitachi on behalf of our clients.”

Partners Group acquired a joint lead ownership stake in GlobalLogic, which develops next-generation software platforms for companies and technology disruptors worldwide, in 2018. At that time, the deal alongside equity partner Canada Pension Plan Investment Board gave the business an enterprise value of $2 billion; when it sold to Hitachi in March 2021, that value was up to $9.5 billion.

“We expect to see the outsourcing of technology continuing, and it’s different to before,” says Ogut. “This part of the market used to be about business process outsourcing, but now it’s about creating a new platform of digital engagement with clients, which means the companies providing those sorts of services are going to continue to be of great interest to investors.”

At Apax Partners, a firm that has been focused on investing in technology for decades, partner Rohan Haldea also talks about the way tech has slowly moved to the very core of all businesses.

“There’s not a single organisation or enterprise that is not now being impacted by some form of digital disruption and is not in need of some form of digital transformation,” he says. “Enterprises that don’t have the capabilities or ecosystems to embrace that will be left behind, and we are investing in platforms that can help companies on that journey.”

The tech team at Apax focuses its activities on tech-enabled services, software and telecoms, with the services element including a deal for ThoughtWorks, a digital transformation and software development company that started trading on the Nasdaq in September.

“We invested in that business when it had revenues of $500 million and when we took it public it is now an $8 billion company,” says Haldea. “We’ve invested in the more innovative digital transformation companies like ThoughtWorks but also in smaller companies that we see going on that journey to help more customers becoming more digital.”

Inflexion is a mid-market firm with a focus on providing capital from £10 million ($14 million; €12 million) to £300 million for minority or majority stakes in high-growth businesses. Irina Hemmers, the partner leading the firm’s investments in tech companies across Europe, says her focus is similarly on software, data and analytics and tech services.

“The way we define tech services is specialist ICT services, quite often underpinning core IT applications within these companies,” she says. “Historically, that was quite a fragmented space, but it is now consolidating, driven by private equity. Platforms are being built to consolidate in local markets, and increasingly internationally, focusing on the mission-critical nature of what can be provided to customers.”

Software has been another particularly hot area for private equity tech investors, attracting LP appetite for a number of reasons.

“The focus of investors overall has really sharpened around a flight to quality and a flight to those technology areas that have shown the greatest resilience through the pandemic because they delivered something mission-critical,” says Hemmers. “Software companies dipped only briefly on the public markets last year, and are now probably valued higher than pre-pandemic. That’s a good place to invest given the resilience and increasing adoption of software and data solutions, particularly in the tech laggard sectors that weren’t at the forefront of digitisation.”

Hemmers points to construction as an industry with a growing landscape of tech investment opportunities, as it transitions from a traditional off-line model to attempting to address challenges like labour and supply shortages through tech adoption.

“The Internet of Things is increasingly playing into that,” says Hemmers, “which might be in relation to equipment on site and knowing where that is, who is using it and when it breaks down. Just a few years ago that was too early stage for us, but now there are some really interesting opportunities out there and that’s an area that’s seen quite a lot of investment recently.”

“Technology is a moving target… if at any point you become static, you become irrelevant”
Rohan Haleda
Apax Partners

Another vertical that is moving rapidly up the agenda is cybersecurity, where the level of threat elevated even more as companies transitioned to homeworking during covid, upping the ante as the challenge moved from an IT issue to a board-level concern.

At Apax, Haldea says cybersecurity is an example of a vertical that has moved from being primarily a software opportunity a few years ago, to now being a tech services priority. “Technology is a moving target and we track the entire landscape because if at any point you become static, you become irrelevant. Cybersecurity was really interesting to us and we invested in a very successful deal in cybersecurity software to build an end-to-end software security product.

“Over time, we found a lot of venture capital funding going into security software, so we found it harder to figure out who were going to be the winners. Customers were buying a lot and we were trying to work out how to play. Now our investment thesis has changed to backing cybersecurity services companies that are helping companies protect themselves, because enterprises are not able to hire the best cyber-talent but can really benefit from the companies that provide that support.”

Ogut at Partners Group points to healthcare as another vertical ripe for tech investment. “We see the cycle of innovation and disruption is at a different level and maturity in different industries,” she says. “Post-covid, everyone wants a different provision of healthcare and there is a lot of software that can improve outcomes.”

The fintech space is more nuanced but still offers many opportunities, says Ogut: “Financial services has always been an early adopter and most financial institutions spend large sums on technology. But now new digital banks are creating a whole new level of disruption that causes the established players to lack momentum.”

AnaCap invests in a host of companies across the tech space, with a focus on financial services. The firm has been backing fintech innovation since 2005, but partner Nassim Cherchali says there has been a real acceleration in dealflow in the past five years. “Financial services has always been a laggard in tech adoption, and we back businesses filling that gap,” he says.

Of particular interest right now are insuretech, regtech and wealthtech. “Wealth management has probably accelerated in the last few years,” says Cherchali, “with people waking up to the fact that actually there’s a real need to digitise that industry. We’ve bought a number of technology platforms for independent financial advisers in the UK and we’re looking at similar deals in Europe.”

Lovell Minnick Partners is another private equity firm focused on financial services and financial technology, where Los Angeles-based partner Trevor Rich shares optimism about insurance opportunities. “As much as insuretech has been a buzzword for a few years now, the value chain across insurance has not shifted that much yet,” he says. “If anything, there might be technology-led efficiencies that have occurred, but the actual value chain has not yet been disrupted by technology.

“The concept of disruption sounds very appealing in financial services, but actually it’s pretty rare because of the complexity of the products and services, the intermediaries involved and the infrastructure that exists today. Really, we have seen modernisation rather than disruption.

“In insurance, there’s this idea that consumers can buy insurance entirely without a broker being involved, perhaps via an app or online. Yet while that may be true for certain risks, by and large insurance is complicated and not something the average consumer thinks about and understands. The question becomes about how we can better distribute those products through technology but maintain the human element to address complexity.”

Such themes are attracting more and more investors into the fintech market. “We are in a part of the market that can benefit from having specialist investors,” says Cherchali. “In most of our recent deals, we have invested into a founder-led business looking for an investor that can help accelerate their growth, rather than a passive investor. That’s where we can still find relatively attractive deals and better terms.

“We have generalists dipping into the space and we see that as a positive, because ultimately that means there will be more buyers for the businesses we help build.”

Those with a track record maintain they have an advantage across tech verticals when it comes to both recruiting talent and driving value creation.

At Apax, partner Gabriele Cipparrone says: “In the areas attracting more competition, like software, we are trying to explore deals where we have strong angles that are maybe less mainstream, to take advantage of our track record and expertise. Our approach to value creation is very subsector-specific, based on our ability to identify patterns across our history of deals.

“Then there is our network. Having done this for a long time, we have an excellent network that is so important given the scarcity of talent. Having access to the right managers, board members and advisers gives us an edge in both winning the deals and making sure the portfolio grows over time.”

Looking forward, Haldea predicts the subsectors to watch will include cyber, artificial intelligence and machine learning, along with further waves of digitisation.

“We still have a long way to go,” he says. “If you look just at migration to the cloud, where the easy work has now been done, companies are going to need much more help from service companies as they continue on that journey.”

Tech services will remain a hot space to watch for some time to come.