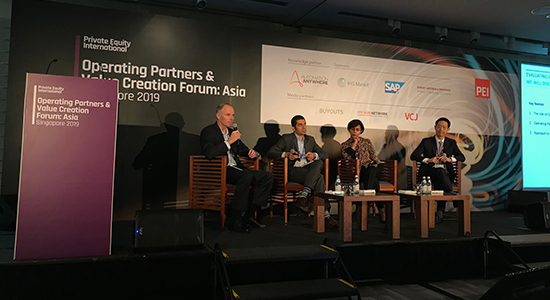 Asian GPs are starting to realise the value that operating partners can bring, delegates heard at PEI’s Operating Partners & Value Creation Forum in Singapore earlier today. Still, the region presents a different set of challenges for operating partners when compared with markets such as the US. In Asia, the numeric shareholding percentage in a given portfolio company means less that it does it the West, said Abhishek Kapur (pictured, second from left), a director with KKR Capstone: “You can be a theoretical controlling shareholder in a business that’s run by a family with the founder still in the CEO seat, and you may not have as much capacity to just enforce your rights.” He added that the key is to build individual and team-level trusted relationships with the founder or chief exec.

While investment giants Japan Post Bank and Government Pension Investment Fund have understandably stolen much of the private equity limelight in Japan, another set of domestic institutions – regional banks – are quietly piling into the asset class. Faced with negative interest rates and a dwindling rural client base, the country’s mid-tier lenders are committing to private equity funds in order to generate additional business opportunities in their respective locales. These might sound like sweet deals, but the banks often want more than just a decent multiple on their invested capital, as PEI explores.

A new face has popped up on placement agent FirstPoint Equity’s website. Adrian Orbe, formerly of The Church Pension Group, has joined as a director in its New York office. It’s not the first time FirstPoint has tapped the LP community: it hired Craig Lewis, previously director of private markets and real assets at Alfred I duPont Testamentary Trust, in 2017.

Credit, well due. Sister title Private Debt Investor’s ranking of the biggest private debt managers in the business is out now. It may not surprise you to learn that Ares Management is top of the tree, with a five-year fundraising total of $48.2 billion (which would put the credit juggernaut at number three in the latest PEI 300). Although Ares has been in the top 10 before, this is the first time it has taken the top spot, boosted by, among other things, its latest €6.50 billion Europe fund.

SK’s start-ups. Korean tech conglomerate SK Group is quickly making a name for itself in the world of Asian venture capital. Earlier this week, it agreed to provide 10 percent of a 1 trillion won (€758 million; $840 million) fund managed by Hillhouse Capital targeting Chinese start-ups, according to Korean Investors. It follows a partnership with the Korean Teachers’ Credit Union to launch a $1 billion fund in September and the formation of a $1 billion ‘investor club’ with Chinese VC firm Legend Capital earlier this year.

How Blackstone does ESG. Responsible investment: everyone is doing it, but what does it look like? Colleagues on Private Funds CFO have been asking GPs this question to get a true sense of how environmental, social and governance principles are (or are not) integrated into investment activity. Here are Blackstone’s answers.

DC’s latest bets on PE. District of Columbia Retirement Board has agreed to $99 million-worth of private equity commitments, including $50 million to Odyssey Investment Partners Fund VI. Here’s a breakdown of the $8.52 billion US public pension’s total investment portfolio.

For more information on DCRB, as well as more than 5,900 other institutions, check out the PEI database.

“It would be really bad… These are really interesting times when some of the things that we would think of as basic could be challenged.”