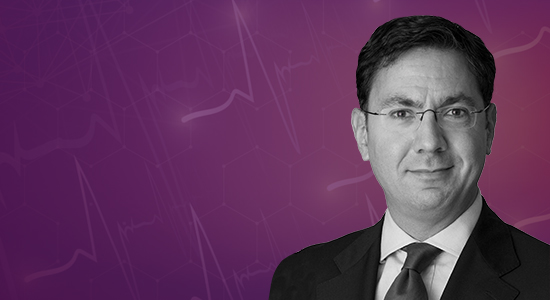 Is there life after Abraaj? Ahmed Badreldin, former partner and head of MENA for the busted firm (pictured), would certainly say “yes”. His investors may be of the same opinion; Badreldin is still at the helm of Abraaj’s North Africa Fund (ANAF II) and has spent the last two years trying to deliver what investors were promised when they committed to the $375 million fund in 2015. Riyada Managers, as the firm is known, has now exited around half of its portfolio generating around 2x for investors, Badreldin tells PEI. Some notes from our conversation:

The link between ESG and cost of capital is becoming clearer. European investor Eurazeo has just secured a €1.5 billion credit facility which is “indexed against ESG performance criteria”, the firm said last week. This is big: the only previous example of linking such a facility to sustainability criteria was revealed late last year in Asia by Dutch bank ING (details here). The twist is that the if Eurazeo hits targets and makes savings, those savings will be put towards environmental projects. If it misses targets and pays extra fees to the banks, then that money still goes to those projects.

Los Angeles-based Ares Management has hired Stephane Etroy, former head of PE at Caisse de dépôt et placement du Québec, as partner and head of European private equity. Etroy will join the firm on 6 February and be based in London. Ares makes PE investments in Europe through Ares Corporate Opportunities Fund V, which raised $7.85 billion in 2016. The firm is seeking $9.25 billion for its sixth PE fund and expects a first closing in the first half of the year, according to Michael McFerran, Ares’ chief financial officer during the firm’s Q3 2019 earnings call (transcript here).

Fund GOATs. The greatest funds of all time? Prominent PE academic Oliver Gottschalg and team have been establishing which funds can credibly claim this title. He has added some new additions to the list.

To qualify for the PE Hall of Fame, funds need to have beaten the market by a couple of specific measures and be big enough to allow meaningful participation by institutions (so world-beating $100 million funds don’t qualify). More detail on the methodology is available here. Advent International, Vista Equity Partners, Berkshire Partners and Thoma Bravo have had funds added to the honour roll.

PEI Awards. Voting has now closed for our annual awards process. Thanks for all of you who voted; results will be announced in the first week of March.

LP meetings. Subscribers can download our investor calendar here. In the meantime, here are some LP meetings to watch out for this week.

Take a (Michi)gander at these PE commitments. State of Michigan Retirement Systems recently made $725 million in commitments across five North America-focused private equity vehicles; among them is a big bet on Blackstone’s second “Strategic Capital Holdings” fund. This fund family buys stakes in other PE firms and has invested in BC Partners, PAG and Kohlberg and Company among others.

For more information on SMRS, as well as more than 5,900 other institutions, check out the PEI database. 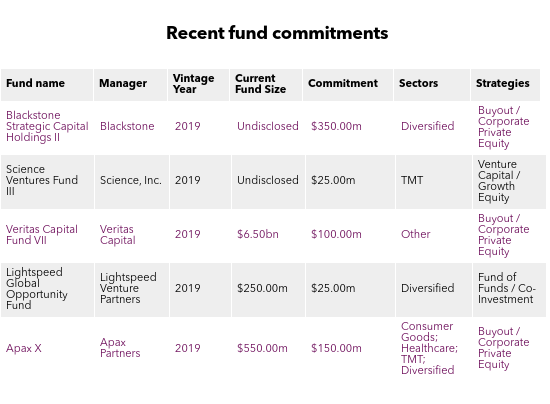 “So currently, it’s not in our portfolio. We think it should be.”

CalPERS CIO Ben Meng voices a desire to get the giant US pension into direct lending (from Private Debt Investor).