US funds are not the only star students in the venture class.

A recent report from the British Business Bank (BBB) found that the UK market’s venture performance regarding distribution and total value paid in has been on par with the US for more than a decade. For some vintage years, UK funds actually outperformed US vehicles.

The report found that UK venture funds that had a vintage year between 2002 and 2006 outperformed US funds from the same period. UK funds during this time saw a DPI multiple of 1.95 and TVPI of 2.17 compared with a DPI of 1.04 and a TVPI of 1.35 that were recorded in the US.

Despite the US seeing more favourable results between 2007-2011, when looking at those four years in isolation, fund vintages between 2002 and 2011 show stronger overall performance from British funds.

More recent UK funds that have vintage years between 2012 and 2016 have seen better DPI and TVPIs than US funds so far, but Alice Hu Wagner, managing director for strategy, economics and business development at BBB, notes that it is probably too early to tell if those metrics will remain or if funds will have different results when they hit maturity.

Hu Wagner said she was surprised that there wasn’t more performance disparity across the majority of the funds in the two markets. “We thought there would be a longer tail of poorly-performing UK fund managers, but that is not the case,” she said. “I thought we would see a much broader range of performance in the UK versus the US.”

Hu Wagner said the one thing that stuck out between the two markets was that the US had a handful of funds that have a TVPI close to 14 that skew the overall results. These outliers represent the funds that could have been early investors in future unicorns or successful companies that went public.

“The whole skewing thing is really interesting,” Hu Wagner said. “VC is all about the outliers, even at the portfolio level. It’s one out of 20 companies in the portfolio that make the return.” 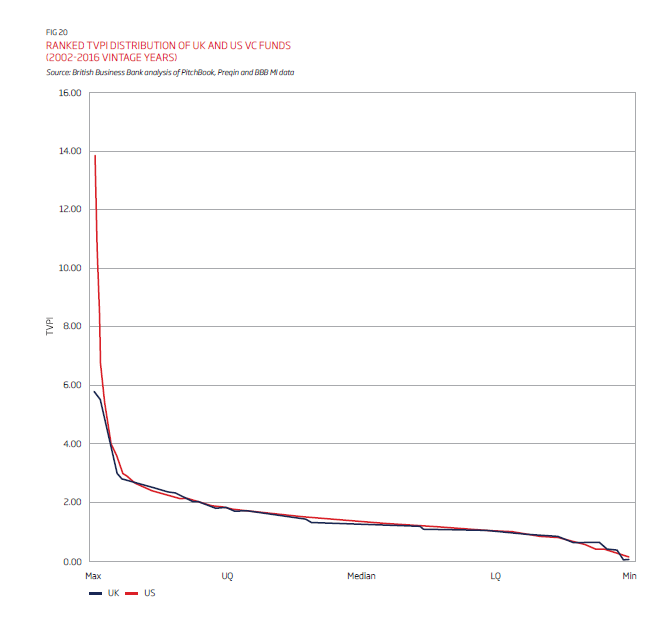 While the majority of these differences between the results of the two markets are slight, this data may help end some of the stereotypes suggesting UK investors interested in venture shouldn’t look at the funds in their own backyard, according to Hu Wagner.

Hu Wagner hopes this data shows that the probability of picking a good manager in the UK is no different than in the US, and that British investors seeking venture returns don’t have to look far.