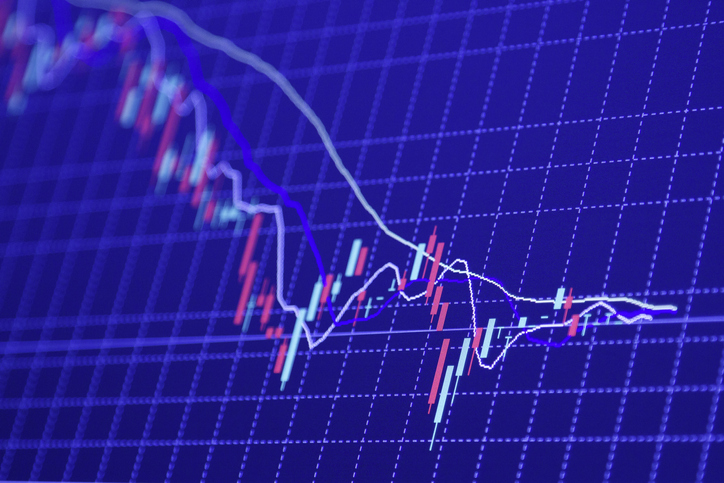 Credit lines have recently become a major discussion point in the private equity industry as they become larger and larger, are outstanding for longer periods and are rather unrelated to the cash management around deal closings, for which they were originally introduced by private equity, private debt and infrastructure funds. The discussions are centred around concerns by LPs that credit lines are misused, fuelled by the current low-interest environment, to show inflated IRRs.

Our analysis is based on all buyout funds from Preqin with vintages from 1990 to 2007 with quarterly cashflow data. Our sample consists of 491 funds. For funds that are not fully liquidated, we treat the remaining NAV as a final cashflow.

For each fund in the sample, we calculate the carry assuming an 8 percent hurdle, a 100 percent catch-up and a whole-fund waterfall. For our analysis, each fund is equipped with a credit line that finances each capital call in the first four years for four quarters. The interest rate on the loans is 3 percent.

The cashflows from and to the LPs are therefore charged in such a way that they put in their money later but have to bear the additional interests on the credit lines. In addition, the carry is recalculated. With the updated cashflow stream we can calculate the TVPI and IRR net to investors as well as the carry as a percentage of the fund size for the fund manager.

Impact on fully realized funds: not large for the majority of funds

Our analysis supports previous findings that the mean IRR can be improved substantially with the use of a credit line, for our sample by four percentage points. Second, the mean difference is considerably larger than the median difference of one percentage point. Third, for around 25 percent of the funds the IRR is reduced by the use of a credit line.

How is the credit line improved IRR correlated with the original IRR? Chart 1 gives the answer, and shows funds with bad underlying performance hurt their IRRs with the use of a credit line and only very good performing funds can increase their IRR performance significantly.

For most funds, though, a credit line will only have a minor impact on their IRR. These results should reduce concerns that managers are able to substantially inflate their IRRs with the use of a credit line: it is possible to do so, but only for managers with funds that already have a strong performance.

The TVPI in Table 1 is lowered for all cases with the use of a credit line as investors have to fund not only the delayed capital calls, but also the additional interest charged by the credit line provider. The impact, however, is relatively minor and around 0.03x both in the mean and median case with not much deviation in the tails. 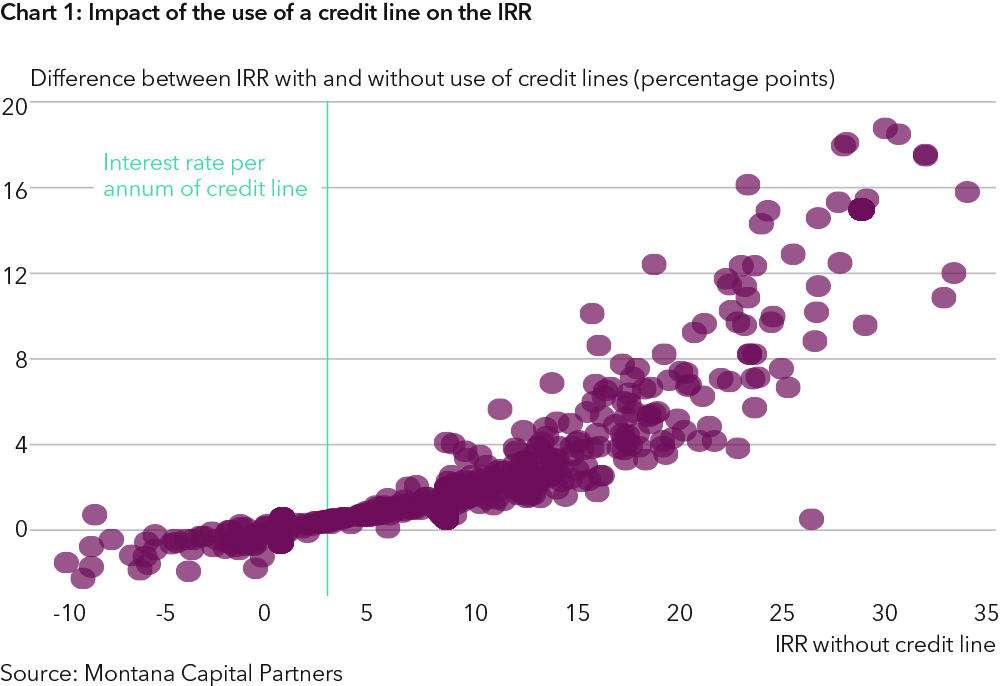 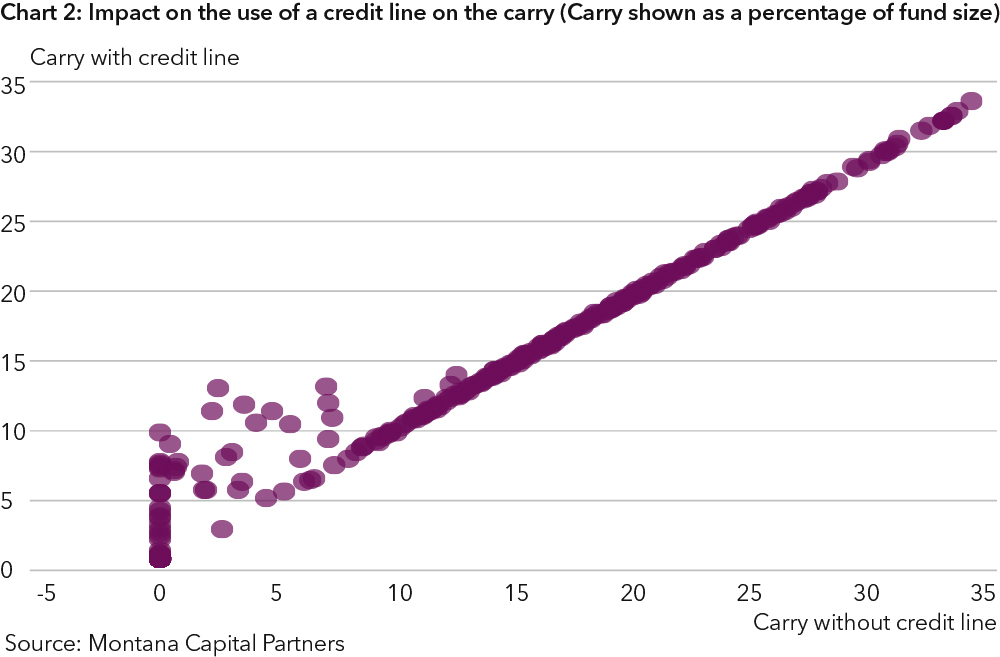 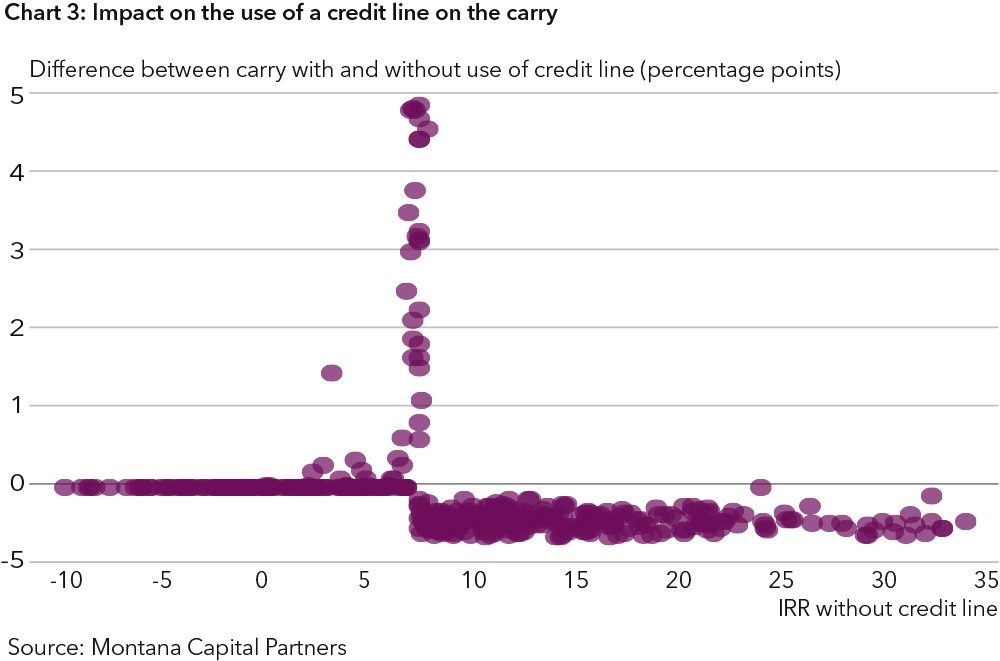 In 14 percent of the observations, a fund increases its carry payment by using a credit line as it boosts the IRR, which in turn helps them to reach or exceed the hurdle. The increase is also economically significant and can be in some cases close to 10 percentage points, as it is the fund manager who exclusively profits from exceeding the hurdle due to the catch-up.

From Table 1, we also know from our previous analysis that the mean difference is slightly positive, so the overall carry payment in our sample, ignoring different fund sizes, would have been increased if every manager used a credit line. As managers do not know a priori how their funds will perform, the bottom line is that the use of a credit line is beneficial to them: they marginally reduce their carry in cases where they are already well into carry for the chance of increasing their carry substantially in cases where their carry is otherwise very small or even zero.

Watch out for the impact on interim performance when analysing funds

Hence, a credit line only impacts the timing of the cashflows between the fund and the investors, but not the amount (with the exception of the small reduction due to the interest expenses that have to be paid to the credit line provider). However, as long as a credit line is still outstanding, it reduces the cashflows by the investors and has a similar effect as leverage by scaling gains and losses in relation to the investor’s invested capital. This is particularly important for investors, as investment decisions for successor funds are usually made while the current fund is still in its investment period.

In the following, we only focus on funds with vintage years between 2010 to 2014 as the interim impact on the fund performance of a credit line is dependent on the valuations of the unrealized investments. As mark-to-market valuation has only been adapted in the industry in recent years, focusing on old vintages could lead to misleading results.

This updated sample consists of 212 buyout funds. We calculate the TVPI and IRR after 16 quarters without and with the use of the credit line. In case of the latter, the reported NAV is adjusted for  the outstanding credit line. We furthermore calculate the carry accrual and adjust for it.

There are two striking differences to the results for the full lifetime in Table 1. First, the impact on the TVPI is now mostly positive, in around 25 percent of the cases even more than 0.1x. The impact on the IRR is even more pronounced and close to 10 percentage points in the median case. Second, the range of outcomes becomes much wider, so the interim IRR and TVPI are much more sensitive to the use of a credit line compared to the final IRR and TVPI.

To summarise our findings: credit lines improve IRR by four percentage points on average, but this is driven by very well-performing funds. For most funds, the improvement, if any, is much smaller and only around one percentage point in the median case.

We show that carry payments of well-performing funds are slightly reduced, but this is more than offset by funds with IRRs around the hurdle that are able to make it into carry or increase the carry, which is 14 percent of funds in our sample. With regards to interim fund performance, funds with early mark-ups in their valuation can increase the TVPI statistic substantially in case of an outstanding credit line.

The takeaways for investors are the following: for fully realised funds, they do not have to worry too much about inflated performance statistics due to credit lines; however, they should be careful for younger funds during their primary due diligence or when investing into funds on the secondary market. Hence, investors should make sure to normalise performance across different funds to remove the impact of credit line use.