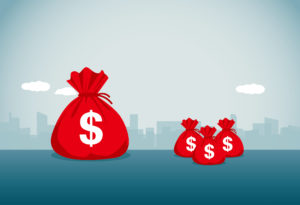 Private equity fundraising fell to its lowest half-year total since 2015 in the first six months of this year.

The top 10 final closes made up a large percentage of overall fundraising. Ten funds combined to raise just under $80 billion, for a 43 percent share of total capital raised.

The Washington State Investment Board allocated $1.45 billion to three top 10 funds, $750 million to Advent’s GPE IX, $400 million to TA XIII and $300 million to Warburg Pincus’ China-Southeast Asia II fund. The $134.7 billion pension plan was the highest-committing LP for the period.

Amongst the funds closed so far, TA Associates’ TA XIII has also received commitments from major state pension plans. As well as the allocations from WSIB and NYSCRF, Massachusetts Pension Reserves Investment Management Board ($250 million), Tennessee ($200 million) and the $80.4 billion Virginia Retirement System ($325 million) provided capital for the multi-regional fund.

One outlier among the US pension funds below is Taiwan-based Fubon Life Insurance, which allocated $70 million to Advent’s GPE IX, $256 million to EQT Infrastructure Fund IV, and $30 million to Warburg Pincus’s China-Southeast Asia II.