Anyone looking for a good quick read before heading off for the weekend should check out the latest from the FT (paywall) on the drama surrounding Athene Holding, Apollo Global Management’s lucrative insurance group. In short, Athene pays fees to Apollo for managing its assets, a setup that has proved extremely profitable for Apollo and its founders and one the likes of industry titans including Steve Schwarzman have tried to replicate. According to the FT, a falling out between Apollo co-founder Marc Rowan and his former protégé, Imran Siddiqui, over the latter’s attempts to set up a similar venture to Athene, has led to “calamity” for all involved.

Funds dedicated to Central and Eastern Europe gathered €1.82 billion in 2018, the highest fundraising total in a decade per Invest Europe data. Capital commitments from non-European investors doubled, reaching nearly 40 percent of total capital raised for the region. That was driven mainly by investors from China, who are active in both commitments and direct investments, and an important route for exits, Invest Europe’s chair of CEE Task Force Robert Manz, tells us. Investment activity also increased: €2.7 billion in 2018, the region’s second highest annual result to date.

Blackstone has snapped up Ram Jagannath, a 12-year Carlyle veteran, to lead healthcare investments for the firm’s new growth equity business. Jagannath left Carlyle in April to join Navab Capital Partners, before the latter announced plans to wind down following the death of former KKR dealmaker Alex Navab last month. Jagannath has joined Blackstone as a senior managing director, according to a statement. He’ll work under Jon Korngold, who joined Blackstone from General Atlantic to lead the new division in January.

Carlyle new chief of HR. The firm has appointed 32-year Goldman Sachs veteran Bruce Larson as its chief human resources officer. Larson replaces Lori Sabet, who retired last year. Larson was previously a partner and head of human capital in Asia Pacific and India for Goldman. He assumes his role on 4 November and will be based in Washington, DC.

Senegal gets into PE. The Senegalese government has launched a €100 million private equity fund dedicated to mid-cap companies, per Bloomberg. Seed capital and technical assistance will be provided by development finance institutions and an external team will manage the fund, said Papa Demba Diallo, chief executive of state-owned investment holding company Fonsis, in the report. Agriculture and healthcare are target sectors.

CFO views wanted. Sister title Private Funds CFO’s inaugural Insights survey, which gathers CFO insight into topics ranging from fundraising to outsourcing, is open and they’d love to get your anonymous thoughts in exchange for an overview of the results when they come out. Follow this link for all the details.

Baltimore bucks. Baltimore City Fire and Police Employees’ Retirement System has confirmed plans to commit $60 million to four 2019-vintage private equity funds. Here’s a breakdown of the $2.75 billion US public pension fund’s total investment portfolio. For more information on BCFPERS, as well as more than 5,900 other institutions, check out the PEI database. 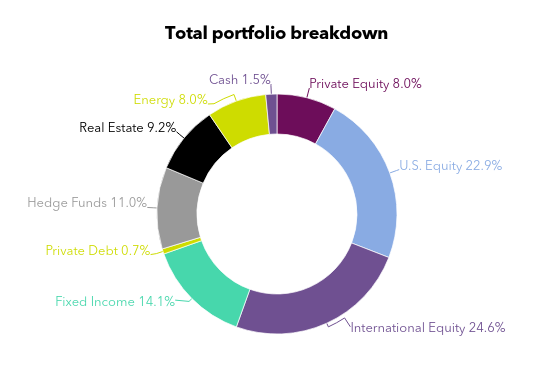