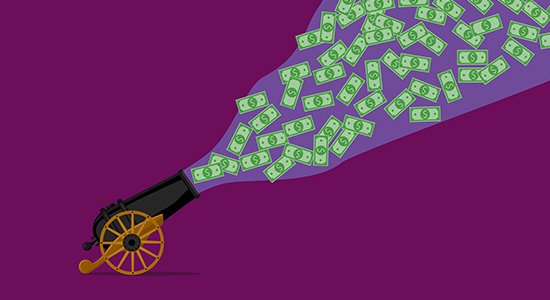 Future Fund’s arsenal
We’ve paid a lot of attention recently to how private equity firms plan to weather the inflationary storm, but how are LPs preparing? Australia’s Future Fund is building an entire “arsenal” of responses to the threat, deputy chief investment officer Wendy Norris told media this morning. The A$196.8 billion ($143 billion; €121.4 billion) sovereign wealth fund has been increasingly focused on inflation over the past year, and is relying on real assets and areas of “innovation” to help ride it out.

Norris’s comments came on the back of Future Fund’s best-ever annual results. The institution posted a 22.1 percent return for the 12 months to 30 June against a 7.8 percent target. It attributed this year’s strong performance in part to significant exposure to PE, which grew 32 percent to A$34.5 billion, or 17.5 percent of the overall portfolio, in the second quarter. More details here.

Another interesting titbit from the update is Future Fund’s pivot from cash to global listed equities, with the former declining 22 percent over the quarter and the latter growing 20 percent. Readers may recall that a good chunk of this cash was generated from a A$6 billion PE balancing early in 2020. More details around that process can be found in in this Deep Dive.

PE’s mindset shift
What will it take for defined contribution pensions to embrace private equity? An industry-wide mindset shift would be a good place to start, according to Joanna Asfour, global head of consultant relations at Partners Group, who tells Private Equity International this morning that the likes of stakeholders, consultants and asset managers must start to report on value rather than just costs. Asfour’s comments precede the introduction of a more supportive regulatory environment for DC pensions in the UK, with the government planning to relax a cap on fees paid by these schemes and launch a new open-ended fund structure. You can read Asfour’s interview here.

One more Thoma
Hot off the fundraising trail, Thoma Bravo is already back with its next flagship fund, our colleagues at Buyouts report (registration required). The San Francisco-based firm is seeking about $22 billion for the new pool, the same amount it raised across three vehicles last year, including its $17.8 billion Fund XIV. It’s not the only firm hoping to capitalise on tech’s pandemic tailwinds, with Vista Equity also expected to seek roughly $24 billion for its next fund. Some 198 tech-focused funds collected $105 billion in H1 2021, compared with $180 billion over 365 funds across all of 2020.

We’ll be back…
Monday is a public holiday in the UK, so Side Letter will return to your inbox on Tuesday. For those readers lucky enough to have the day off, enjoy!

An unstoppable Whitehorse
Preferred equity specialist Whitehorse Liquidity Partners is back in market with its next flagship just four months after closing its predecessor, affiliate title Secondaries Investor reports (registration required). The firm is seeking $5 billion for Fund V and will target a 12 to 14 percent gross return. Here’s how the firm’s existing vehicles have fared so far.