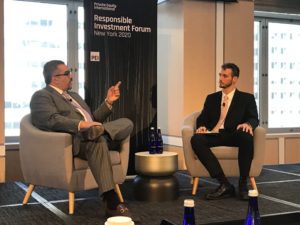 The biggest challenge to getting more capital into the hands of diverse-owned managers is that asset allocators often falsely assume it’s an impact investment play, according to Robert Greene, president and CEO of the National Association of Investment Companies.

In the opening keynote interview at Private Equity International’s fourth annual Responsible Investment Forum in New York, Greene recounted an instance when he took 20 members from the NAIC, an organisation representing diverse-owned private equity firms, to meet with an investment consultant. Greene said he made clear at the start of the meeting that none of the members was an impact investor, and yet at the end, the firms were told they would only be considered if the consultant moved into social investing.

“This individual, maybe, I would offer, couldn’t see past skin colour and gender to understand that he was in the room with some of the top investors in the country, but his own view on things didn’t allow him to receive it in a way that was actionable.”

The NAIC represents more than 80 diverse-owned firms with over $155 billion in combined assets.

Greene told delegates that while dollar amounts with diverse managers may be increasing, the proportion is not: only 1 to 2 percent of non-indexed, investable capital is managed by diverse managers.

Greene also spoke of his experience as a trustee of the Virginia Retirement System from 2008 to 2017, the last two years as chairman of the pension plan. During his tenure, capital invested with diverse managers grew from less than $100 million out of a total of around $52 billion in assets, to $4.4 billion across seven asset classes.

“As a group…the diverse managers in private equity outperformed every other asset class, bar none, no caveat.”

Many things need to go right for any new firm to succeed in private equity, but diverse-owned firms face an extra headwind: the perception that focusing on diversity comes at a cost to performance. However, the data simply doesn’t show that.

What’s more, there tends to be “a narrow view around what an investment manager looks like”.

“Diversity challenges that in ways that make people uncomfortable, and people don’t like to invest money when they’re uncomfortable.”

Greene told delegates that the business case for hiring diverse candidates is “very simple”: “To do otherwise suggests that only one group of people have talent that’s valued.”

He added that executives with close personal histories may be less likely to stand up to one another.

“Groupthink is a very dangerous behaviour in any investment firm, but especially in a private equity firm.”