When Hamilton Lane priced on the NASDAQ on 1 March, investors' attention was on a much bigger IPO. Social media company Snap floated on the New York Stock Exchange on the same day with a market valuation of around $24 billion, far outstripping the firm's $1 billion.

But Hamilton Lane was happy to stay away from the spotlight.

“We had figured we would do it between late last year and the middle of this year,” chief executive Mario Giannini tells Private Equity International.

“The exact week or the exact month turned out to be gratuitous really. But we knew Snap was going out. In some ways, it was good because they got all the attention.”

For Pennsylvania-based Hamilton Lane, which manages money through separate accounts and commingled funds and also offers advisory services, the goal wasn't to make a big splash. Nor did the firm need the capital, Giannini says. The IPO raised about $170 million in net proceeds for a $1 billion enterprise value, which it used mainly to pay down debt. What the firm wanted to do was affirm its independence and gain an institutional structure and framework. It also viewed the IPO as an important branding exercise.

Giannini adds he wanted to make sure that he could offer all 290 employees shares in the company – before the IPO, only about a third of employees had shares – and that employees would have an avenue to monetise those shares in the future.

“We've always had that employee shareholder culture,” he says, adding that this IPO “really provides a path [for employees to exit] over a long period of time”.

Alternative asset managers which have gone public have often seen their businesses's success go unrewarded in the stock price. One of the reasons is that they are registered as limited partnerships, rather than corporations. Becoming the latter – which could make more sense under a reformed US tax code – could open the pool of potential investors and help lift share prices. Activist investor ValueAct Capital, which said at the end of April it owns nearly 5 percent of KKR stock, is pushing for this move at that firm.

Hamilton Lane, however, could be said to be in a more favourable position than other publicly traded alternative asset managers for two main reasons: it went public as a C corporation, not a partnership, and it derives the majority of its revenues through recurring management fees, not carry.

“This is the way we look at it, and that's why our story resonated: we're in the same industry, but we're different,” Giannini says. “We're not the same as the general partners. In general, we have more recurring revenue. We're easier to understand. We tried to make the story as clean and as simple as possible.”

Giannini recognises valuations have reached high levels in most parts of the private market industry, partly fuelled by the enormous amount of money flowing into the space. However, he doesn't see the current situation as a repeat of the pre-crisis pattern.

“By and large, general partners this time around have been very careful,” he says. “You haven't seen the excesses you saw in 2000 or in 2007 and that's a good thing.”

He's more concerned about LPs. “We're seeing more LPs doing co-investments and direct investing by themselves. That worries us a little because it will be the first cycle.” A downturn could result in an LP being stuck with a troubled co-investment, for example.

Giannini also thinks investors are allocating too much to private equity, although he understands that other asset classes haven't been as attractive from a performance standpoint.

“When we look at the markets, we tell our clients 'now is when you want to be maintaining your average private equity allocation',” he says.

“For a lot of clients, I think they feel they have to increase their allocation because their assets are running away from them. What we're telling them is stay steady, or go to the low range of their target. This isn't the time to be doubling down on your allocation to private equity. The risk seems a little higher than it was a few years ago.” 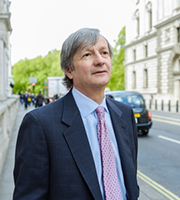 “By and large, general partners this time around have been very careful. You haven't seen the excesses you saw in 2000 or in 2007 and that's a good thing”

The secondaries market is another area that worries him, as its growth only happened during the current cycle. He thinks there could be a scenario where a levered secondaries portfolio bought at a premium turns negative for a period of time.

“You see a lot of secondaries deals being done with a fair amount of leverage,” he says. “You're seeing leverage that you just haven't seen before. That's a little risky and that worries us a little bit.”

Hamilton Lane is no stranger to that part of the market – it raised just under $2 billion for its latest secondaries vehicle, Hamilton Lane Secondary Fund IV, although Giannini declined to comment on fundraising. The firm is still buying rather than selling, but with a fund significantly smaller than those of some of its competitors, it is not under as much pressure to put dollars to work, he says.

“Secondaries could end up losing money, which I don't think anyone sees as possible,” he says, adding that a downturn would freeze up volume and push the value of existing portfolios down. “It depends how long the downturn goes.”

Looking forward, the IPO will not prompt Hamilton Lane to make significant acquisitions or to explore new lines of business, according to Giannini.

“The first thing is 'do no harm to the existing business',” Giannini says. “It's always tempting to think about expanding and acquiring but we have a very good core business today. I'd be surprised if we did anything outside of where we have expertise.”

He would, however like the firm to increase its real assets – particularly real estate – and debt strategies to meet investor demand. On the debt side, it currently has a dedicated co-investment debt fund and manages separate account mandates.

Another area of potential growth is the number of offices. Hamilton Lane currently has 12, with plans to open another in Sydney soon. Giannini says the firm is considering a second European office – in addition to London – and options could include Dublin, Frankfurt or Luxembourg. It might also consider opening an office in the Middle East or in China down the line.

Not over-reaching feels like Hamilton Lane's motto. Even as it surprises the market by going public, it refuses to radically overhaul its offering. It's an attitude that could see it well-placed in the event of a downturn.